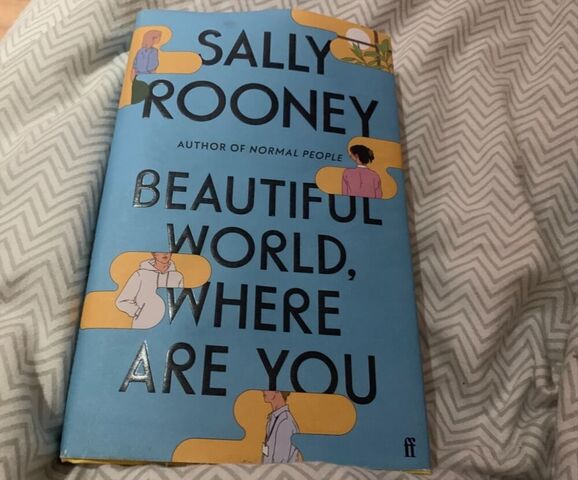 The Irish author of Normal People, Sally Rooney, has yet again successfully covered a range of topics which permeate our lives in her new novel, Beautiful World, Where are You (BWWAY).

While Rooney has had huge success with her previous two books, Conversations with Friends (2017) and Normal People (2018), she has received a ton of backlash recently upon the publishing of her third book. This backlash came from Rooney rejecting a publishing deal with an Israeli publisher, Modan Publishing House, due to the practice of apartheid in Israel. However, Rooney’s decision has come with a plethora of praise from fans too.

Jumping in on the Sally Rooney discourse with a fact check: she turned down a deal with Modan—Israel Ministry of Defense Publishing House—to translate her latest book, in compliance to BDS, not because of the Hebrew language.

If you’ve read either of Rooney’s first two novels then you know what to expect from her poetically melancholic and blunt writing style. But there’s something slightly different about BWWAY as Rooney adopts an effortlessly formless framework through alternating chapter-by-chapter perspectives and email conversations, interchanging between first and third-person narratives.

Following a year (or so) in the life of two 30-year-old, intellectual, Marxist women, Alice and Eileen, the novel occupies topics of friendship, love, the meaning of life, mental illness, and the struggles of fame. And, in true Rooney style, includes a hell of a lot of sex; in the most romantic way, of course.

BWWAY begins in the oh-so-familiar setting of a blind Tinder date at a bar in a remote town in Ireland. Here we are first introduced to Alice, a rich, famous novelist who has taken to hibernation after some time in a psychiatric ward, and her romantic interest, Felix, a working-class labourer. Initially, Felix and Alice are very different, and don’t seem to like each other much. But that’s what I love about them; we never know what’s going to happen, their romantic narrative is kept rather ambiguous.

The other protagonist is Alice’s best friend from college, Eileen, who works for a literary magazine in Dublin, earning 20-K euros a year. She has an on-again off-again romance with Simon, her childhood family friend. It’s a tale as old as time. Simon, like Rooney’s previous male characters, is an older, handsome, and sophisticated yet complex man….  but he’s a devout Christian.

Preceding each chapter which narrates in turn the lives of both women, is a first-person email conversation written alternatively by Alice to Eileen and vice versa. It is in these emails that Rooney invites us into the friends’ psyches on a much deeper level as we read their in-depth conversations about the world’s aesthetic beauties. “You wrote that to confuse personal vanity with aesthetic experience is a grave mistake. But is it another mistake, and maybe a related one, to take aesthetic experience seriously in the first place?” Alice says. “No doubt it is possible to be moved in a personally disinterested way by artistic beauty or by the beauty of the natural world. I even think it’s possible to enjoy the good looks of other people, their faces and bodies, in a way that’s ‘purely’ aesthetic, i.e. without the element of desire,” she ponders.

As per usual, Rooney is not subtle in her sex scenes. But she does tell these scenes from the perspectives of her female characters, making them raw, delicate, and truthful; unlike what you might see in porn. What I love most about Rooney’s approach to sex is that she ignores the taboo of women enjoying sex. Sex in this novel is all about enjoyment for Alice and Eileen and neither woman is neglected of an orgasm. What’s more is that Rooney doesn’t just focus on heterosexuality as Alice admits that she is bisexual in a discussion with Felix who is also bisexual: “I’m not exactly heterosexual,” says Alice. “Amused now, even mischievous, Felix answered: Oh, okay. Me neither, by the way.”

Rooney isn’t new to including LGBTQ+ characters in her literature; her first novel Conversations with Friends included two-bisexual women and a lesbian protagonist.

On the other hand, Eileen playfully coerces Simon into late night dirty phone calls whereby she takes the upper hand by persuading him to imagine sleeping with a duteous wife who seems quite the opposite of herself. “The wife would give you head,” she tells Simon. “Which she’s really good at. But not in a vulgar way, it’s all very intimate and marital and all that,” she teases Simon over the phone. “Holding the phone in his right hand, Simon used his left hand to touch himself through the thin cotton cloth of his boxer shorts.”

By now, Sally Rooney fans will be used to the author’s deep and honest portrayals of depression and self-hatred, and BWWAY doesn’t neglect those themes. As she becomes more successful as an author, Alice begins to regret her fame and frequently claims her own self-hatred after her discharge from the psychiatric ward. In a similar fashion, Eileen states that she makes herself angry. Meanwhile, Rooney also makes a return to the topic of depression in men through the character of Simon who’s told that living with him “is like living with depression.”

Thus, whilst returning to her beautiful combination of sarcastic humour and serious topics, Rooney has successfully depicted two romances in one novel and given fans an insight into what is perhaps her own struggles with becoming an internationally successful author.