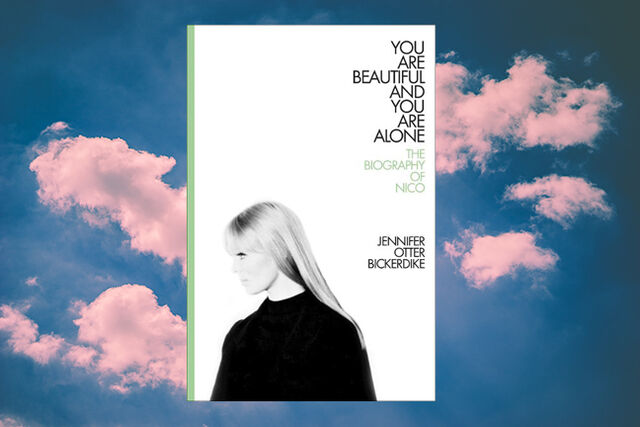 Warhol Superstar Nico has always been an enigmatic figure in Pop culture. Now there is a new biography about her, You Are Beautiful and You Are Alone. The Biography of Nico, (Hachette Publishing) written by Dr. Jennifer Otter Bickerdike which chronicles in great detail her fascinating life.

Nico’s (who’s birth name was Christa Paffgen) childhood was spent in war torn, Nazi Germany. By the time she was a teen she grew into a great beauty which proved to be Christa’s ticket out. In the mid 1950s, after being discovered by an agent for a large German department store, Christa began runway modeling at the age of 16, was spotted at a fashion show by an editor from Vogue magazine and asked Nico’s mother permission for Nico to move to Paris to model for the fashion bible. Photographer Herbert Tobias accompanied Christa to the city of lights where he told her “Christa is no name for a model” and christened her Nico.

Nico soon became a top model and was then cast in Italian films La Tempesta and then in Fellini’s La Dolce Vita. After a breif affair, she had a son with French screen idol Alain Delon. Nico named the child Aaron and called him Ari. Delon denied paternity and Ari was raised by Delon’s mother, Edith Boulogne, who became the boy's legal guardian adopting Ari and leaving Nico basically out of the picture. Their separation lasted until Ari was eighteen and was the cause of much heartache for Nico.

While in London, Nico was noticed by Andrew Loog Oldham, The Rolling Stones' manager, and recorded a single “I’m Not Sayin.’” The single flopped but she met The Stones’ founder, Brian Jones, and the two became involved. This was pivotal because It was Jones who brought her to New York and to meet the man who would help make her known to millions of people worldwide. That man was Andy Warhol.

After becoming Warhol's new Superstar, replacing the troubled young heiress Edie Sedgewick, Warhol and his film partner, Paul Morrissey, thought that Nico could be the lead singer for a band they discovered and were managing called The Velvet Underground. The band’s songwriter and vocalist who didn't have much stage presence, Lou Reed, wasn't happy to say the least.

The Velvets first album, The eponymous The Velvet Underground & Nico, was financed by Warhol and released in early 1967. Although it didn’t sell many copies it became one of the most influential records of all time. Roxy Music’s Brian Eno once famously stated that “The Velvets may not have sold many units but everyone who bought a copy started their own band.”

Nico spent 1967’s Summer of Love with The Doors’ lead singer and lyricist Jim Morrison often taking peyote in the California desert. It was Morrison who said she should write her own material by writing down her dreams. He helped her find the perfect instrument to accompany her Teutonic voice which was the harmonium. Morrison apparently liked red heads, so Nico dyed her hair with henna to please him and was never blonde again. She also discarded her Mod look and was influenced by Dior’s Peasant line which she embellished creating her Moon Goddess appearance. Now Nico felt she had reinvented herself as a true artist and would never be valued only for her looks again. With this new outlook she went on to record five more albums most of them based around her voice and the harmonium.

The book goes on to quite intricately tell how Nico’s life unfolded after leaving The Velvets and embarking on a solo career. Ms. Otter Bickerdike does an incredible job of detailing Nico’s often difficult, nomadic existence. This biography digs deep into the possible reasons that the grand dame became a heroin addict for many years such as the trauma of her childhood in war time Germany, being shunned by Delon, being separated from her son, and how she existed through it all. There are several testimonials from well known people who knew Nico on different levels like Paul Morrisey, Viva, Danny Fields, Iggy Pop, Jackson Browne, and John Cale. This page turner also includes interviews the author did with people who were both musicians and fans who knew her such as Mark Almond (Soft Cell), Peter Hook (Joy Division/New Order), and Siouxsie Sioux (Siouxsie & The Banshees) and ones who didn't but were admirers of her work like Mark Lanegan (Screaming Trees), Dave Navarro (Jane’s Addiction), and Cosey Fanni Tutti (Throbbing Gristle).

The author states that Nico detested ideology but lived her life on her own terms which was definitely Feminist but with sometimes unorthodox choices. Having been a huge fan of Nico since I was introduced to her work as a kid in the late 1970’s, I was thrilled to see that there was a lot of new information I never knew about the late chanteuse. Obviously this was a labor of love for Ms. Otter Bickerdike who’s goal was to have Nico’s reputation cleared against all of the legends, myths, and salacious rumors surrounding the great lady. I can't help but think that somewhere, Nico is beaming with happiness that someone has finally set the record straight.