CEO and Poet Kanchan Singh Illustrates The Ugly Truth Behind Healing From Trauma In Her Newest Book "Dear Me, I Love You": BUST Interview

Details
BY Sydney Jackson
IN Books
Published: 20 May 2021 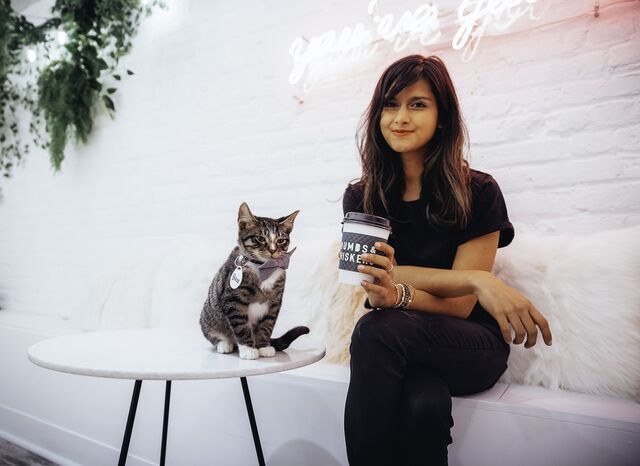 Entrepreneur, CEO of famous cat cafe Crumbs & Whiskers, and poet Kanchan Singh is a natural-born healer. Starting her own company after deciding to leave a career that was no longer fulfilling her, Singh’s story of how her immediate success led to her newest release—Dear Me, I Love You, a book that explores the harsh realities of healing from trauma—showcases her immense resilience. I had the pleasure of getting to know Singh and learn about her journey through therapy, how a trip to Thailand inspired her to become a business owner, and how our trauma from childhood can ultimately affect us as we get older.

Can you describe how Crumbs & Whiskers came about?

I had been working at Accenture, and looking back at my college self, I knew I was doing it to please my dad. Obviously, at the time I didn’t even realize that, but when you do things for validation or acceptance by others, it starts to catch up to you quickly and leaves you feeling unfulfilled. That was how I was feeling, and at one point, I just hit a breaking point. Travel and animals have always been my escape, and I had been dreaming about volunteering at this elephant sanctuary [in Thailand] ever since I had heard about it years ago.

While I was there, I realized that I needed to be in animal welfare, but I didn’t know how to do it. I really liked the model of the elephant sanctuary because people were paying to come in and see these elephants and interact with them, which the nonprofit was using to take care of [these animals]. As somebody who had worked in animal shelters before, where there is not enough funding and cats are in cages, I had thought, “wouldn’t it be cool if there was a place where cats could roam free?”

During the rest of my trip, these two guys that I had met in a hostel observed that I would feed so many stray dogs and cats. So for my last day in Thailand, which was my birthday, they surprised me by taking me to a cat cafe. Walking in there was like walking inside to the answer of the question that I had been asking myself. I had told the two guys that I was going back to the U.S. and starting my own cat cafe. So on that flight back, I took the United airplane napkins and mapped out my entire business plan, because I didn’t have notebooks. I was just very inspired when I got there, and it felt right. Some things had not felt right for me in so many years, and it was like an oasis in a desert.

You have described how the success of starting your own company ultimately led to you dealing with a lot of burnout and stress. Can you touch more on what those experiences were like?

It was very isolating and lonely. There are these things called triggers, right? I had a traumatic childhood, and the success of my company triggered every wound that I had. I had buried a lot of stuff inside. [At first] I would feel great about myself, and I didn’t realize that I had been drinking that Kool-Aid, because we live in a world where external success and validation is sold to us. If anything, my feelings of being a fraud only got worse, and I was feeling like I was going to be found out. The anxiety was bad, and [for a while] I was living on autopilot. Through a lot of self work, I realized I was being my father, because that’s what I was trained to be. I became him, someone who is judgemental, critical, and overly competitive, and that’s how I was showing up in my company also. As a sensitive woman, I don’t think there is any place for [someone like me] as a CEO. The more I tried to solve it, the worse it got.

In regards to Dear Me, I Love You, tell me about the whole process behind that project. Did you feel that it would be more effective to do a poetry book as opposed to doing specifically prose?

I started therapy once everything started going nuts in my company, and I realized I am not completely based in truth. So much came up in therapy, because as a child, I was bullied, physically and sexually abused, sexually assaulted, and I was like, “Woah." Up until starting therapy, people would ask me, “What’s your favorite memory from childhood?” and I would think, “People have that? That doesn’t make sense to me." I thought that it was stupid, so therapy forced me to slow down. As somebody who was a sensitive and emotional child, and then had to turn all of that off in order to survive in this cutthroat world, the only way I could start to process [everything] was through poetry and to write.

I still remember my first poem: I was crying on the bathroom floor and I took out my journal just to [write stuff down], and out came this two page poem and I was like, “what just happened?” Then, I just started writing poetry and writing to process all the emotions that I was going through. I didn’t even realize I was writing a book, and about a year in, I was thinking that I have never read a book that shows what healing actually looks like. The process was ten percent writing about the emotions I was going through and ninety percent of healing and facing my demons. When writing, I never knew if poetry was going to come out of me, if it would be prose, or even a conversation.

Are there any other business ventures/projects that you want to pursue in the future?

I want to expand Crumbs & Whiskers to other cities like Boston and New York, since I could really see the benefit of that. With poetry, I want to pursue being an artist and doing spoken word performances, books, and such. That’s where I see the next five years of my life at least.

If you could give any advice to someone who might be in the same situation that you were once in and who wants to create/do something for themselves, what would you tell them?

Listen to your heart. Do things that make you feel as if you are in love with what you are doing and feel good about doing. Everyone is going to have an opinion about it; that’s what I have learned. The opinion we usually value the least is our own, especially when we come from marginalized communities and being told that our opinion is less valuable than others. Value your heart, how you feel, and your emotions, because that can be the scariest thing to do, but it takes a lot of bravery and courage.

I care so much about people and animals, so if I had to pick one thing, it would be being the one that heals others.

You can check out Crumbs & Whiskers here. Pre-order Dear Me, I Love You here.

Tags: Kanchan Singh , Crumbs & Whiskers , Dear Me I Love You , cat cafe , mental health , burnout , healing from trauma , poetry
Support Feminist Media!
During these troubling political times, independent feminist media is more vital than ever. If our bold, uncensored reporting on women’s issues is important to you, please consider making a donation of $5, $25, $50, or whatever you can afford, to protect and sustain BUST.com.
Thanks so much—we can’t spell BUST without U.