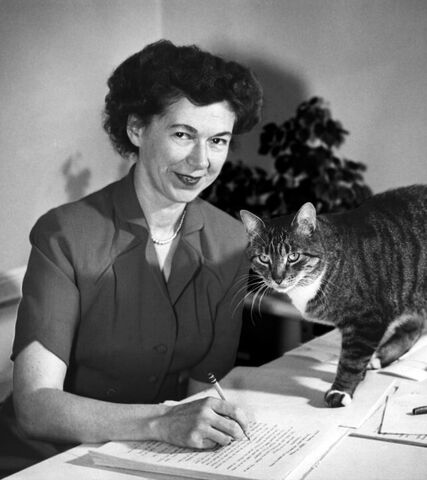 For fifty years, Beverly Cleary captured kids’ experiences with a bright-eyed and bushy-tailed spirit that was as rare in literature as it was real in childhood. The beloved children’s author died on March 25 in Carmel-by-the-Sea, California, less than three weeks shy of her 105th birthday.

Cleary was born on April 12, 1916, and grew up on a farm in Yamhill, Oregon. The town was so small that it didn’t have a library until Cleary’s mother—a schoolteacher named Mable—started one. Her mother also gave her advice that she would carry with her throughout her life: “Keep it funny. People always like to read something funny.”

“Children should learn that reading is pleasure, not just something that teachers make you do in school.” —Beverly Cleary

Like her beloved character Ramona Quimby, Cleary and her family faced money troubles. Her father was forced to sell his Yamhill farm in the 1920s, which led the family to move to Portland. Cleary would go on to focus her children’s books on kids growing up around Portland’s Klickitat Street, near her own childhood home. Today, Portland’s Grant Park is home to the Beverly Cleary Sculpture Garden, which features sculptures of her characters Ramona, Henry Huggins, and Ribsy.

Cleary struggled with reading in her early years at Fernwood Grammar School. Her first-grade class was sorted into three reading groups—the Bluebirds, the Redbirds, and the Blackbirds. “I was a Blackbird,” she recalled in an interview for Horn Book magazine (via Encyclopedia.com). “To be a Blackbird was to be disgraced. I wanted to read, but somehow could not.” Back in the 1920s, many of the books she was assigned to read were books from England in which the children had nannies and traveled in pony carts, which bore no resemblance to her own experience.

As time went by, Cleary began to find books that resonated with her, including Lucy Fitch Perkins’ The Dutch Twins, a story about the adventures of two ordinary Dutch children. In the seventh grade, Cleary wrote her own first work of fiction, an essay about a child sacrificing her pet chicken to feed George Washington’s troops. As Cleary recalled in her memoir Girl from Yamhill, her teacher once read one of Cleary’s essays aloud to her class and then declared, “When Beverly grows up, she should write children’s books.” The Fernwood Grammar School was renamed the Beverly Cleary School in 2008. When Cleary gave her stamp of approval, she asked whether the school “still smelled like a sawdust floor.”

“She was not a slowpoke grownup. She was a girl who could not wait. Life was so interesting that she had to find out what happened next.” —Beverly Cleary (from Ramona the Pest)

After high school, Cleary earned a Bachelor of Arts degree from the University of California, Berkeley and a second bachelor’s degree, in library science, from the University of Washington. She met Clarence Cleary at Berkeley and eloped with him in 1940, despite her parents’ disapproval of the fact that he was a Roman Catholic. Cleary worked at a library in Yakima, Washington; an army base in Oakland, California; and Sather Gate Book Shop in Berkeley. According to her second memoir, My Own Two Feet, she once experienced severe stage fright before reading aloud to kids at one of her library jobs, but later made a boy fall out of his chair laughing during her reading of Dr. Seuss’ Horton Hatches the Egg. One day, another young boy at the library asked her, “Where are the books about kids like us?” Cleary grew inspired to write the kinds of books she would’ve wanted to read when she was younger, so she got to work on her first book, Henry Huggins.

“If you don’t see the book you want on the shelves, write it.” —Beverly Cleary

Henry Huggins was published in 1950, and Cleary went on to write and publish more than 40 books prior to her retirement in 2000, including the celebrated Ramona series and the Ralph S. Mouse trilogy. Her approach to fiction was inspired in part by advice from one of her college English professors, who said, “The proper subject of the novel is universal human experience.” Her career was also guided by her determination not to allow trends or money to dictate her writing decisions. Her books are beloved for their liveliness, which emerged because they explored the kind of life she herself had lived during her youth. She inspired new generations of writers, and particularly fellow children’s authors, including Judy Blume. “Beverly, you were my inspiration when I started to write all those years ago,” Blume once said. “You remain my inspiration today.”

“Love isn’t like a cup of sugar that gets used up.” —Beverly Cleary (from Ramona the Brave)

When asked about turning 100 years old on the Today show in 2016, Cleary said, “I didn’t do it on purpose.” She continued to (accidentally) live until she was nearly 105. Her impact lives on in sculptures and school hallways, in her books, and in the imaginations of current, former, and future young people.

In The "My Salinger Year" Movie, Margaret Qualley's Joanna Rakoff Is A Secondary Character In Her Own Story