How Karla Pacheco Created One Of Marvel's Most Fearless, Flawed Heroes: BUST Interview 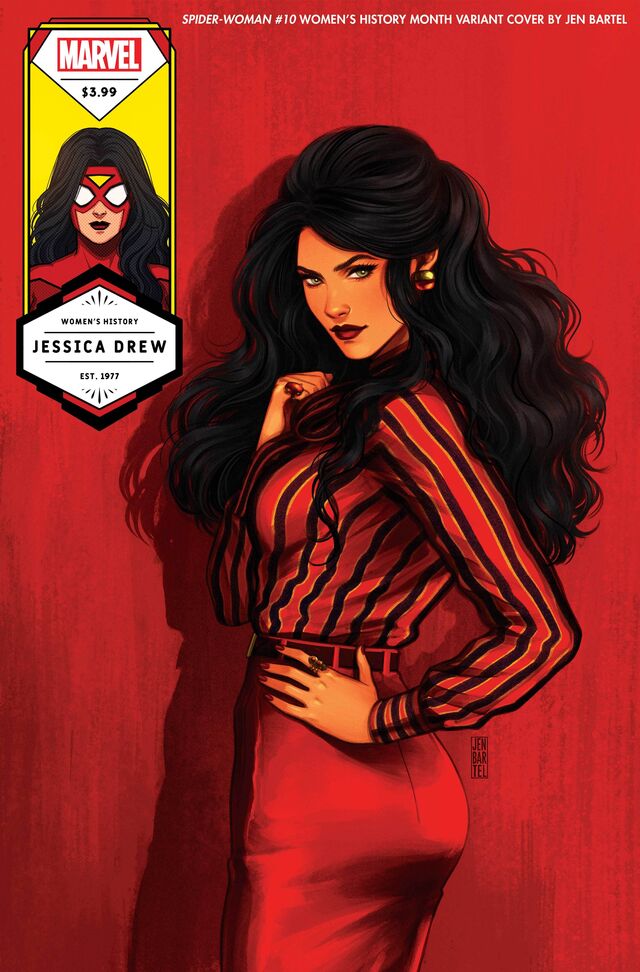 I was supposed to write this article, an interview with Spider-Woman writer Karla Pacheco, almost a year ago. I messed up, but the world is currently kind of on fire, so we're okay. I bring this up to you, dear reader, because the irony of the situation does not go over my head: I messed up writing a story about the amazing Jessica Drew, aka Spider-Woman, who also at times has great intentions but f**ks up.

Pacheco's Spider-Woman run has experienced a couple of setbacks because of the pandemic; however, these setbacks did not stop the comic's success. The comic first launched last March to incredibly positive sales. Issue #1 sold 142,000 copies; I mean, it even beat out the issue of Batman released at the same time.

After the pandemic hit, comics stopped printing for a couple of months, and Spider-Woman fans weren't able to learn what happened to Jessica until June, when issue #2 came out. Due to financial restraints, many comics were delayed or canceled, but not Spider-Woman.

"We were very fortunate we were allowed to keep going, and I felt it really showed how much faith Marvel had in us," Pacheco said.

Spider-Woman is Pacheco's first comic book series. Pacheco may be one of the most exciting people you will ever talk to. She lives half the year on a boat called the Slippery Pig, she previously worked in radio, and she got her start as a comedy writer. Pacheco used to work for websites like Cracked and National Lampoon, and she got her foot in the "comics door" by meeting people, talking to them, and attending writer panels at comic cons and online. Pacheco gained a lot of notoriety for her humor on Twitter, and she said her presence that the social media platform helped jump-start much of her comics work.

Pacheco's name was put on the map when fellow comic writer Chip Zdarsky wrote a hilarious letter of recommendation for her ahead of the DC Comics writers' workshop. Before writing a full-on series, Pacheco had written in a handful of comic anthologies and her own children's book, Inspector Pancake.

"His letter of recommendation was hilarious. He wrote this whole thing where he was just like, 'You know, I think Karla has a great future in comics, but if she doesn't, you should hire me,'" Pacheco said. He asked her if it was too silly and offered to "write her a real one," but she insisted on keeping the original hilarious letter.

The letter, although funny, didn't help Pacheco get admitted to the writer's workshop. Still, it went viral and exposed the charm and comedian that is Karla Pacheco to various editors who began to follow her.

"I got way more attention for my failed DC writer workshop application letter than I would if I'd actually gotten into the workshop," Pacheco said. From there, many people started to pay attention, and editors recommended that she specifically pitch her idea for a Spider-Woman story.

Although she has had other writing jobs, Pacheco says writing comics feels like home. "I love writing comics because I feel like people don't necessarily understand that comics really is its own medium. People tend to think of it as a screenplay that's holding still. You've got such limitless potential to tell a story in a way no other format will allow you to tell," Pacheco said.

As we all know, Pacheco got the job to write Spider-Woman — and with good reason. Pacheco skillfully interweaves Jessica's past as a Hydra experiment and her friendships with Captain Marvel (aka Carol Danvers) in the first few issues, and unravels the mystery of her spider-powers. And did I mention earlier that Jessica sort of f**ks up from time to time? It's not on purpose, and it may be one of the most relatable qualities Jessica has. Pacheco explores Jessica's trauma, fear, and coping mechanisms in the first eight issues.

"I think one of the most relatable things we see in Jess is that she's flawed, she uses humor as a coping mechanism, but overall she tried to be a good person. At least, that's what I always related to about the character. Stripping Jess down to her most vulnerable, putting her in a place where she has to face her past trauma and history...I think a lot of us can empathize with needing help but not wanting to "burden" the people we love," Pacheco said.

The book is high-intensity action-packed zaniness, complete with helicopter explosions and dinosaur punching drawn by Pere Perez, colored by Frank D'Armata, and lettering by Travis Lanham.

But don't be fooled by the explosions, high kicks, and humor. The book has a lot of heart and will also pull on your heart-strings like any good book will do. Pacheco said we are heading in the "home-stretch" with Jessica's first story, and we should also see a return of Jessica's iconic yellow and red costume with a few upgrades.

"Jess is getting back to normal;  but nothing's ever really "normal" for Spider-Woman, and the coming months contain some very cool new villains I'm excited for people to meet — along with more surprising appearances from Jess's past — and of course, Karla ripping everyone's hearts out and making people mad at me," Pacheco said.

Spider-Woman issues 1-9 are currently out, and a special cover celebrating Women's History Month by artist Jen Bartel can now be pre-ordered and will go on sale on March 17.