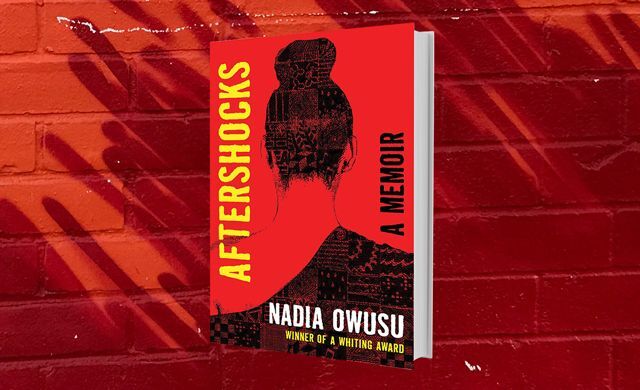 In Nadia Owusu’s memoir Aftershocks, life experiences are like earthquakes. Fault lines break open around the loss of her beloved father, her mother’s abandonment, all the places around the globe she’s lived, the blue rocking chair she hoisted from the street and can’t get out of. Her compact, variously ordered recollections are set in myriad countries due to her father’s job with the United Nations, although both her parents were gone by the time she reached her teens. All the while, Owusu relies on her internal seismometer to process and interpret how everything appears in the tectonics of her mental wellbeing.

“When I was a child,” she recalls, “I thought I might want to be a surgeon as well as a writer. The earth, a pretty teacher once told me, is the universe in miniature. The body is a microscopic earth. If I mastered the body, I would know the earth. But I couldn’t do that because I could barely comprehend algebra.” From the way Owusu tells it, her teacher was right. Don’t be surprised if you pick up your own rumblings while this evocative book is still in your hand.

Sara Schaefer's Contemplative Memoir Invites Us To Laugh Along With Her

Tags: books , memoir , book review , Nadia Owusu , loss
Support Feminist Media!
During these troubling political times, independent feminist media is more vital than ever. If our bold, uncensored reporting on women’s issues is important to you, please consider making a donation of $5, $25, $50, or whatever you can afford, to protect and sustain BUST.com.
Thanks so much—we can’t spell BUST without U.