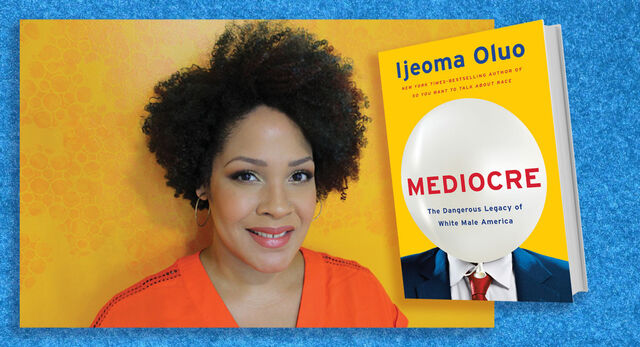 When author Ijeoma Oluo, 39, went to a women’s writing retreat to pen the follow-up to her 2018 bestseller So You Want to Talk About Race, she found inspiration in the discussions the other women were having about the career struggles they faced. Oluo realized that their experiences all had one common denominator: they had all been manipulated, dominated, and harassed by privileged white men. And in the resulting book, Mediocre: The Dangerous Legacy of White Male America (out December 1), she discusses how this phenomenon can be seen throughout American history—most notably in the White House. I caught up with Oluo in Seattle via Zoom to talk about post-election racism spasms, sexual harassment, and raising sons to reject toxic masculinity.

Why did you write this book?
I think anyone who writes on issues of race has found that since 2015, there has been so much focus on: Why are white men like this? Why are white men so angry? What is going on? But if you’re a writer of color, you’re like, Oh wait, you think this is a brand new white man that didn’t exist before? Because this is not brand new. We’re now seeing the final form of a problematic formation of white male identity that is hurting everyone. I wanted to show what this looks like. I wanted people to look at their own lives and say, “Oh OK, this has been going on, and maybe I’ve been a part of it. Maybe I want to do something else.”

Do you think Trump encouraged white men to be more vocally racist?
The election and re-election of Obama reinforced white men’s fear over loss of power. I remember the day after his re-election, white men who had always been pleasant to me at work were suddenly sending me angry messages out of the blue. We had never even discussed politics. They were like, “You’re to blame. You’re the reason why.” I remember thinking, Wow, something is really different. White men are in a mood right now. So, I think that reactionary identity flared up with the re-election of Obama and then Trump allowed that fear and anxiety and bigotry to really flourish.

You write that you’ve been sexually harassed at many jobs throughout your life. How can we get this to stop?
Men know this is happening. Not only are they doing it, but they are also watching their friends do it. They listen to their friends brag about it and they ignore it, even though they know how powerful it is for one man to say, “Hey, that’s not cool.” And yeah, it ruins all the other dudes’ days. But it matters. Men need to recognize all those times when they were active or passive participants in the harassment and abuse of women.

As the mother of two sons, how have you raised them to push back against patriarchy?
It’s such a battle. If you are a mother of sons, you see how the world tries to pull them away from who they are. It is so painful to watch. Everything that is sweet and curious and kind about your children, society tries to say it isn’t appropriate for boys. It is heartbreaking because you know who they are. You see this light in them. And you see it go out. My house has always been intersectionally feminist, but my son would come home from school and say something [sexist] and I’d be like, “Where the hell did this come from?” It’s what everyone is saying at school. It’s what his buddies are saying. It’s what teachers are saying. So, we don’t watch something where a dude makes a joke about “boys will be boys” without me launching into a lecture. My feminism is bound up in the liberation of women. But goddamn, this is hurting our boys, too. The patriarchy is robbing young men of half their lives. It’s absolutely devastating to see.

Tags: Ijeoma Oluo , Mediocre , So You Want to Talk About Race patriarchy , toxic masculinity , race
Support Feminist Media!
During these troubling political times, independent feminist media is more vital than ever. If our bold, uncensored reporting on women’s issues is important to you, please consider making a donation of $5, $25, $50, or whatever you can afford, to protect and sustain BUST.com.
Thanks so much—we can’t spell BUST without U.