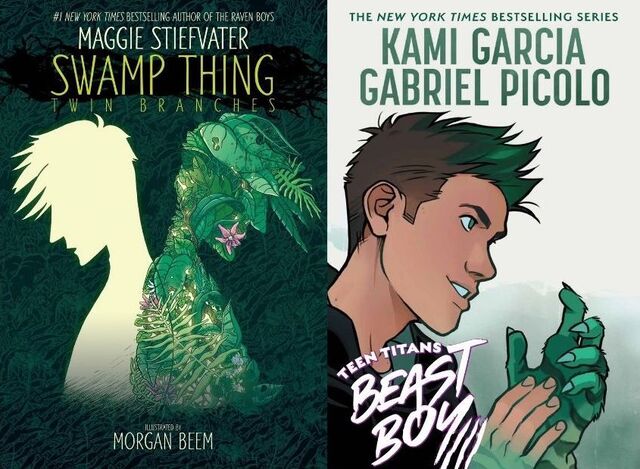 After many years of requests for better representation in comics, comics are continuing to diversify and open more doors for women, on and off the page — and Young Adult fiction could be a big contributing factor.

Just this week, DC Comics announced Marie Javins as the new Editor-in-Chief of the entire company. Javins will be responsible for developing and overseeing the execution of the company’s publishing schedule to grow all DC imprints.

One imprint that has been incredibly successful in attracting female readership and providing more writing jobs to women in graphic novels is DC’s imprint geared towards YA audiences, aptly titled DC Graphic Novels for Young Adults. The imprint is, by creation, inclusive: most of the editors, artists, and all of the writers are women. Many of the authors come from the YA genre.

YA fiction has always had a strong readership of girls and women. In fact, according to a Pew study, women read more than men overall. So, why do more women read YA? For Swamp Thing: Twin Branches author Maggie Stiefvater, it is because of the overall inclusivity of YA.

“People have been growing up with this. They started out as teens and now they are turning into adults, but to me, it’s because young adult prose fiction is a bastion of a progressive kind of storytelling,” Stiefvater tells BUST. “So if you’re interested in speculative fiction and fantasy, but you don’t want it to be all, that joke of, ‘She boobed boobily down the stairs where her boobs looked around the corner first…’ If you want to get a type of fantasy that is not going to be misogynistic, it’s going to have progressive values, and is also going to be told in a very immediate sort of style, YA became the home for that.”

DC’s YA graphic novel books are very successful, ranking highly in book lists like the New York Times’ graphic novel bestseller list. In addition to receiving national accolades, the books are opening doors for more women creators and are a great gateway for new readers, according to education experts.

Kami Garcia, author of Teen Titans: Beast Boy and Teen Titans: Raven, says YA novels have also been known to be places where the prose is progressive and inclusive of marginalized and underrepresented communities. A part of that may also have a lot to do with how the creators are writing from the perspective of their own lived experience. Garcia knows many YA writers, for example, that have anxiety, depression, chronic pain, dyslexia, or some type of neurodivergence.

“I have ADHD, which manifests as hyperfocus, so it’s like perfectionism to the nth degree. I feel like a lot of us have these hidden things about ourselves. People coming from marginalized genders and sexes, we have all this kind of lived experience. Chronic pain and anxiety disproportionately affects women and young women. So we are looking at all of these things from these lenses,” Garcia says. Garcia’s book, Best Boy, not only focuses on Garfield and his physical transformation into Beast Boy, but has a side story about one of his best friends, Tank, who is diagnosed with dyslexia.

Graphic novel writers also have a unique opportunity that they can use images to better explore the emotional depth and complexity of the world the characters live in, making the experience come alive for readers.

“I think one of the great things about graphic novels is that they are very character-driven,” Stiefvater says. “Graphic novels make more space for the internal landscape which is why they are such a great gateway drug. I think that gives every creator a chance to put that emotional landscape and more of that emotional truth of diverse experiences because you have room for it in the storytelling medium.”

In Swamp Thing, Stiefvater’s two lead characters, twin brothers, run away from home after finding out their father was an adulterer. One of the twins is diabetic. Alec’s type one diabetes is not a plot point, but it’s just a part of who he is. It is another example of representing a person who gets to be a superhero while also dealing with a real-life condition.

Garcia and Stiefvater’s books are coming-of-age stories, but also feature a fun and heavy dose of science. Swamp Thing focuses a lot more on botany and biology, while Beast Boy has more of a focus on zoology. The books unite science and medicine with magic and character development. They are inclusive and relatable but they also give readers the perspective of someone they may not look like. The books encourage boys to express themselves emotionally and show that females are scientists and interested in science.

DC’s YA graphic novels are making an impact on the page and in real life. The books also give more opportunity for diverse writers and artists to work in the comic and graphic novel medium, a goal DC Chief Creative officer Jim Lee has prioritized.

Garcia worked with Brazilian artist Gabriel Picolo for both Beast Boy and Raven. While Garcia was a well-known, established author, Raven was Picolo’s first job in the comics industry. Before working with Garcia, Picolo created Teen Titans fan art and established a large following on instagram. For Swamp Thing, Stiefvater worked with comic artist Morgan Beem.

Right now, the world of comics, like all book industries, is suffering a setback due to the economic hardships caused by the COVID-19 pandemic. In response, Garcia co-organized Creators for Comics, a fundraiser to raise money for indie book and comics shops. Through that work, she has continued to try to promote and give more opportunities to women and marginalized genders in comics.

“One of the things I talk about and try to promote and give away are Zooms with other creators who identify as female or non-binary. I want more people involved in comics and graphic novels, especially for girls to see this is not all men anymore,” Garcia says.

DC’s YA lineup may be young, but it is quickly positioning itself as the future of graphic novels and comics — for readers of all ages.