“Brag Better” Author Meredith Fineman Wants You To Advocate For Yourself: BUST Interview 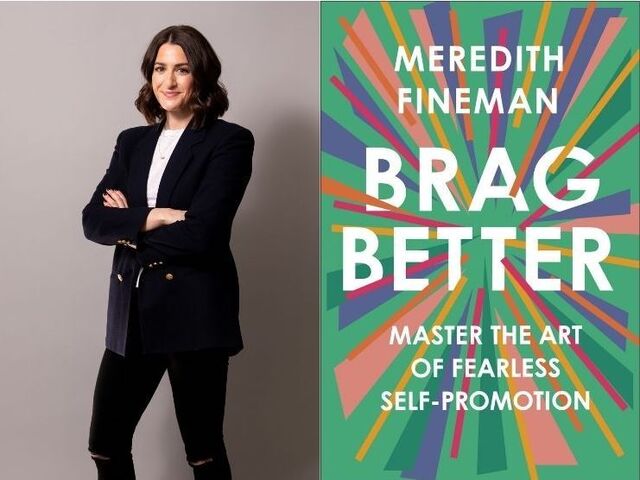 There’s a lot to learn from entrepreneur, writer, and podcast host Meredith Fineman. She recently released her first book, Brag Better: Master the Art of Fearless Self-Promotion (Penguin Random House), a bestselling guide to self-advocacy. Aside from this book, Fineman founded and is the CEO of FinePoint, a leadership and professional development company that elevates individuals, from young professionals to CEOs, by helping women utilize and understand public relation tactics. Over a Zoom call, Fineman and I talked about the art of self-promotion, book touring during a pandemic, and more.

Your book came out this summer! Congratulations – this is probably not the book tour you were expecting.

No, I had all these outfits and was ready to sign the books, and all that stuff. It was supposed to come out in May, but it came out in June, but it’s been really great. I’m happy this book has been helping a lot of people in such an uncertain time. Particularly for [people] that are looking for jobs or never thought about how to talk about their work from behind the screen.

While, as an author, I imagine this isn’t the most fun way to publish a book, I do feel like this book is very timely. I think women have struggled talking about our work and now it’s more important than ever to learn how to do.

It’s an evolving skill. You’re not supposed to know how to do these things, you don’t have the vocabulary, you don’t have the role models, you don’t have the set up. This affects women really deeply. I am very careful of books putting the onus on women; I’m not going to pretend that if you brag better a lot, these systematic issues [will disappear], whether it’s for women, or people of color, or any other voices, but it is another tool to have.

When I got the book, I wasn’t sure this was for me. I didn’t understand until I read the book that most of us are “Qualified Quiets” to some degree. This book isn’t just for people who view themselves as meek or shy. We all need to be brushing up on these skills.

And I catch myself not doing it. [Bragging is] a lifelong skill, it’s hard to do all the time, it affects everyone. Even if you’re not shy about it, it’s something you can refine from a linguistics and strategic point of view.

Something I’m always thinking about it is, “What is the line of emulating straight male culture and being ourselves?” I do think the ways companies are set up and how it has trickled to down to what we deem as professional dress, hair, and speech patterns are formed from straight white men. I agree with your work and think we do need to be bragging better, but where do we draw the line between emulating and leaning in too far and having people meet us where we are in terms of our dress, hair, and speech patterns?

I was talking about this in an interview earlier. There are some core messages in Brag Better, which is bragging is stating facts, our accomplishments are worth talking about, but I always want people to do this in a way that is true to them. The system has a long way in acknowledging that attributes we tell women to do particularly in business but that’s why I cared so much that this book not be based on gender. It’s taking on male attributes and what does that mean in terms of how we view femininity in terms leadership and business. We have so far to go. One thing is about bragging better and showcasing your skill set is [figuring out] what is going to make it true to you.

My blanket message to women is: I just care that you feel good talking about your work and that you are able to do it to the right people to advance your career. People are going to say whatever they are going to say, and it’s an impossible tightrope. I’ve been called every name in the book, whether that’s obnoxious or annoying or too ambitious. My work comes from what I have seen in PR and in media, which has been rewarding the wrong voices and us paying attention to the wrong metrics. I do acknowledge that a lot this is a system problem. There is already research out how the pandemic is affecting women and working women and working moms and you see some of that literally play out on a Zoom screen. People are asking me how to break through on a Zoom call because it sets us so far back, whether it’s how loud we’re talking or not interrupting…it’s messy.

And maybe a takeaway from bragging is taking it a step further for people to show systems and bosses and companies that these feminine traits are fine. If you are somebody who wants to wear something particular at work, maybe your “Brag Better” is being able to talk about why your outfit, hair, and speech patterns are all appropriate.

Right, it comes down to representation. Women are policed from their voice to their ankles, and I’m a white woman. I have so many amazing women of color in this book speaking about their own experiences. The book looks into the misogyny piece, racism, and the ableism of what makes it so difficult to express yourself, but it comes down to representation. It comes down to having more voices in the mix that look like what we look like. Someone asked me if I wanted men to shut up and I said no, but if [men] echo our voices, it matters. It’s free for you, it doesn’t not mean your privilege is less or your airtime is less, but if you can’t do a speaking gig, it is free for you to suggest a woman, a person of color, anyone who doesn’t look like you, because that booker isn’t going to do that work. They are probably just going to ask another white guy. It is just about getting more thoughtful, qualified, interesting, truthful voices in the mix. It is part of your job in your career, and as a citizen, to share what you know and bring other voices into the mix.

In terms of helping each other, you talk about bragging on the behalf of others.

Bragging better is a team sport. It is your job […] to pass the mic. Again, it is free and easy to do that, like Luvvie Ajayi Jones, who started the Share The Mic Now movement. It’s so important, it’s not about the big people doing it, it’s about doing it for your colleague, or registering people to vote, which is part of exercising your voice. More voices together are what gets a message across. Anyone can do this at any level at any stage. It’s easier to do it for others too. It’s a lovely way to do a service for someone and, again, it’s free and easy. It is part of our jobs to carry those voices forward that aren’t heard as easily. No issues would move forward around feminist issues, especially the conversations were having about intersectionality. It’s all about having more voices.

I think that’s so simple and so powerful, especially right now when people feel hopeless. They feel like they are this tiny piece in this disgusting system, and they can’t do anything about. I think this is an easy, hopeful message.

I appreciate that, and I think it can be very granular. One thing I really cared about with this book was that it was highly tactile and prescriptive, and it goes along with not telling someone to be more confident. That’s so unfair and so anxiety-provoking, and not helpful. At the end of the day, I care that women feel good talking about themselves and their work because it is so complicated and it’s a deep act of vulnerability. It’s not always pretty to be a woman who puts herself out there and that is real too. It’s scary, is a brave thing to do and the hard thing to do. My argument is that it does move the needle forward in your work.

I agree with that, and I think the more we do that together, the faster and further we can push the needle.

Absolutely, it feels so nice to help other people. It’s an easy thing to do to share someone’s message or share someone’s work and to be able to ask that in return. Asking for help is hard. I use the word brag because it’s the only one we have. I looked so deep into language, but there was really nothing else to describe this. It elicits the same fears and anxiety in everyone, disgust, judgement – what if people think I’m too much, what if people think I’m obnoxious. When a client or "Qualified Quiet's" asked me [about this], I tell them that’s the difference between [them] and a blow-hard. It’s that level of self-awareness. It’s the less qualified voices who don’t have that filter, and have no trouble sharing whether it is good or not. People need to hear from you and your voice deserves to be heard.

Maybe let’s reclaim the word brag. Feminist used to be a “gross” word. Maybe that’s a fun goal for the book, to have people take that word back.

That’s what I’ve decided. Many people over the past 7 years have told me not to use this word. It is just another tool in your toolkit and I’ve seen the effects of it at every level. I decided I was going to redefine that bragging was stating true facts about your work strategically and cohesively to advance your career.

What really resonated to me in the book was learning to differentiate criticisms between the peanut gallery and your trusted folks. I think this is something very hard for women and "Qualified Quiets." How can we can actively work at this?

I am very guilty of this. I get a million lovely emails about the book and then one person is like, “This sucked,” and I’m like, “I’m going to think about that every night for the rest of my life.” Some of that is being too hard for yourself. Part of bragging better is being able to accept praise and be okay with it. We are not conditioned to accept compliments and agree that we’re doing okay.

For feedback, you have to determine whether someone’s feedback is constructive, whether you want to pay attention to it. Evaluate: is this someone who has your real best interest at heart? Is this someone whose work you like? What is your relationship to this person? I will say one dangerous place for this feedback and criticism is sometimes people we deem as powerful. If it’s not someone who cares about you, if it’s not someone whose feedback is thoughtful and constructive versus just critical. You know what’s trash and you know what’s immediately good. It’s the middle area that is really hard. It’s still hard to not take it to heart. Consider the source, consider the message – maybe run it by a couple people you really care about, because sometimes you need more opinions.