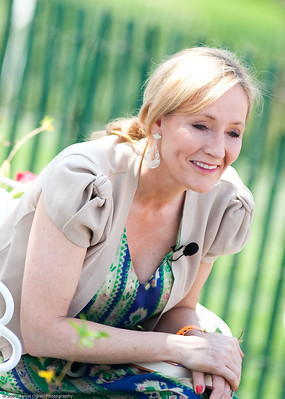 Happy birthday JK Rowling! To celebrate the queen of TERFs and Harry Potter author’s birthday, trans folks and allies took to Twitter and started donating money to Mermaids, a UK charity that supports trans youth, in her name.

Rowling came under fire last month for her remarks about trans people on Twitter, particularly when she rejected the validity of the term “people who menstruate.” The statement she issued addressing the tweets was equally riddled with transphobia. On her website, Rowling explains why she stood in solidarity with Maya Forstater, a woman who was fired for making transphobic remarks on Twitter. She also sprinkles in some biological essentialism and defends lesbians who choose not to date trans women with penises. And to top it all off, Rowling reminds us of the dangers of transitioning at a young age. Don’t worry, though: she’s done years of “research.”

#HappyBirthdayJKRowling! To celebrate, I've donated £5 to @Mermaids_Gender in your name, a charity that supports rather than demonizes the trans community. Perhaps others can do the same. Have a lovely day. pic.twitter.com/vXRy4WPqPO

However, members of the queer and trans community are using JK Rowling’s presence in the “gender critical” movement to support pro-trans organizations. And what better time to do that than her birthday? I might add that Harry Potter and JK Rowling share the same birthday, but that’s beside the point. One user tweeted “#HappyBirthdayJKRowling! To celebrate, I’ve donated £5 to @Mermaids_Gender in your name, a charity that supports rather than demonizes the trans community.”

#HappyBirthdayJKRowling to combat JKR's deeply harmful transphobia, I've decided to donate to @Mermaids_Gender a service designed to support transgender youth and all young people who may be questioning their gender. Nobody should have to suffer the way I did as a teen pic.twitter.com/lIvMa3ZtVx

According to a spokesperson from Mermaids that spoke with Pink News: “We have received a great deal of support today from people around the world searching for a way to express their love for trans kids and their families.”

since it's JK Rowlings birthday today, below are some links to gofundme's and charities to help trans people! #HappyBirthdayJKRowling

And if you want to give your money to somewhere else besides Mermaids, check out this Bustle article that includes 32 Black-led queer and trans organizations to support.