Details
BY Aliza Pelto
IN Books
Published: 06 May 2020 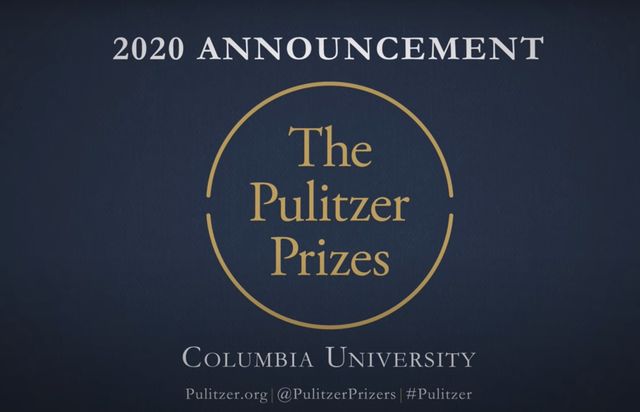 This year marked the 104th year of the Pulitzer Prizes, an awards series for journalism, letters, drama and education, among other things, created by Joseph Pulitzer in the early 20th century. The first woman to win a Pulitzer Prize was Edith Wharton in 1921, who won the “Novel Prize” for her classic book, “The Age of Innocence.” Since then, dozens of incredible women have been awarded with these prestigious prizes from Anne Sexton, to Harper Lee, to Toni Morrison.

A journalist at ProPublica, Rose was awarded the Pulitzer Prize for National Reporting along with her colleagues, T. Christian Miller and Robert Faturechi for their investigations of a series of accidents, death and neglect in the United State Navy’s 7th fleet.

Hannah-Jones of The New York Times was awarded the Pulitzer Prize for her essay, “Our democracy’s founding ideals were false when they were written. Black Americans have fought to make them true.” The essay, which opened the 1916 Project, details America's origins through the lens of enslaved African people.

This American Life was awarded the prize for Audio Reporting this year for an episode titled “The Out Crowd” by the Los Angeles Times’ Molly O’Toole and Vice News Freelancer Emily Green. “The Out Crowd” explored the personal implications of the Trump Administration’s “Remain in Mexico” policy.

4. Ida B. Wells for a special citation

This year, The Pulitzer Prize Board awarded a special citation to Ida B. Wells. Wells was a pioneer in investigative journalism who worked tirelessly for civil rights, exposing atrocities like lynching in the United States. The Board has pledged $50,000 in her name to continue working towards her mission.

Lucas, along with her colleague Jay Hancock of Kaiser Health News were finalists for the Investigative Reporting prize for their exposing of predatory bill collection at the University of Virginia Health Care System.

Xia and Kannan along with Terry Castleman were finalists for the Explanatory Reporting Prize for a series of articles detailing the effects of climate change on the California Coast in the Los Angeles Times.

Barry, the New England bureau chief of The New York Times was a finalist for the Feature Writing Prize for a story in The Times titled “The Jungle Prince of Delhi.” The article investigated journalistic coverage of a disposed aristocratic family living in a ruined palace in India.

Cooper Jones was also a finalist for the Feature Writing Award for an expose in The Verge about Ramsey Orta, the man who filmed the killing of Eric Garner at the hands of the New York Police Department.

Jenkins became a finalist for the Commentary Prize for a series of columns in the Washington Post about fairness and equity in sports.

A Culture Critic at The Undefeated, McDonald was a finalist for the Criticism Prize due to a series of articles she wrote about the intersection of race and art in theater and film.

Henneberger of The Kansas City Star became a finalist for the Editorial Writing Prize for editorials on sexual assault, domestic violence, and abortion access in her state.

A journalist at the Minneapolis Star Tribune, Burcum was also a finalist for Editorial Writing for an opinion piece about pollution and a mine being built in a wilderness area of Minnesota.

Blackwell along with Dieu Nalio Chery were finalists for Breaking News Photography for a number of photographs of the political turmoil taking place in Haiti featured in the Associated Press.

Photographer for the Boston Globe, Erin Clark, was a finalist for the Feature Photography Prize for a series of photos of a family in Maine struggling with homelessness

Freelance photographer Mary F. Calvert became a finalist for the same prize for a series of photos in the New York Times of men who survived sexual assault in the U.S. Army.

Along with Andrew Beck Grace, Chip Brantley, Graham Smith and Robert Little, Beemsterboer became a finalist for the Audio Reporting Prize for their podcast on NPR, “White Lies,” which detailed a notorious murder that took place durng the Civil Rights era.

Journalists and photographers from various newspapers were also recognized for their craft and commitment to providing information, with winners hailing from The New York Times, The (Louisville, Kentucky) Courier-Journal, The Washington Post, The Baltimore Sun, Reuters and the Anchorage Daily News. Dozens of incredible men were awarded this year as well including Jericho Brown for the Poetry Prize and Colson Whitehead for Fiction. You can find the full list of 2020 Pulitzer Prize winners and finalists on the Pulitzer Prize website.

Tags: The Pulitzer Prizes , Pulitzer Prize , 2020 Pulitzer Prizes , Women Pulitzer Prize Winners , Pulitzer , Women Journalists , Women Writers , Ida B. Wells
Support Feminist Media!
During these troubling political times, independent feminist media is more vital than ever. If our bold, uncensored reporting on women’s issues is important to you, please consider making a donation of $5, $25, $50, or whatever you can afford, to protect and sustain BUST.com.
Thanks so much—we can’t spell BUST without U.