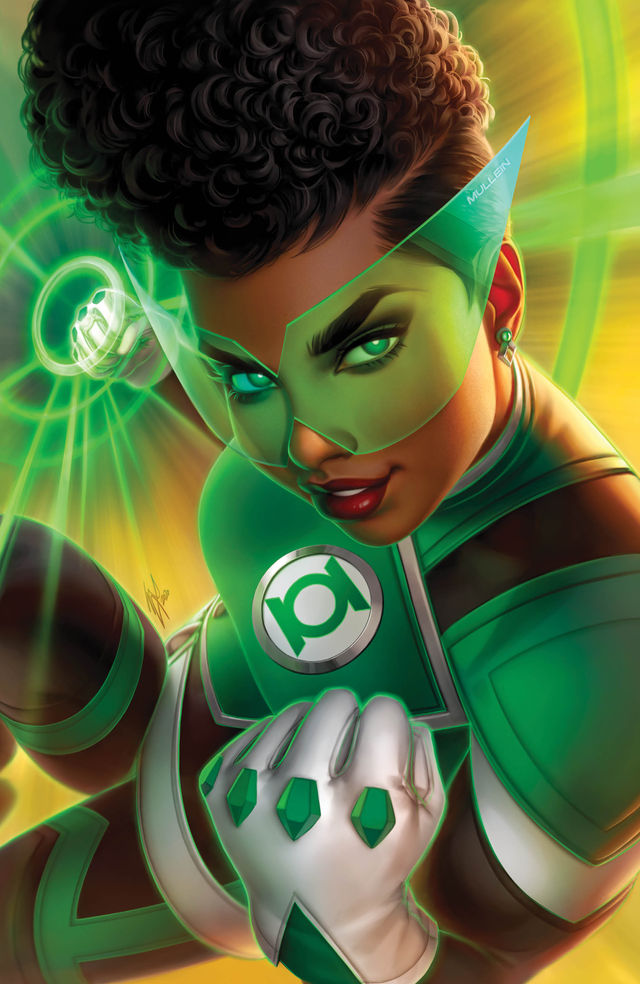 Lantern Mullein is the first black woman to wield the Lantern ring. She's brought to life by Hugo Award-winning author N.K. Jemisin, with artwork by Jamal Campbell, who also did the art for the comic Naomi.

Jemisin has created a world filled with awe and beauty, and interweaves different parts of our current realities. In Far Sector, we see Lantern Mullein working in a place "far" from the earth, in the sector "City Enduring." She is there to solve the first murder on this planet in five centuries.

The first three issues set the tone and build the world of City Enduring. Readers learn how Sojourner becomes a Lantern through flashback scenes and dialogue—leaving more room to watch this Lantern be a competent badass as we learn her origin story.

What makes Sojourner special, like with all Lanterns, is revealed. Issue five, released on March 25, shares with the readers more about the life Sojourner had before she was a Lantern and why she accepted the task.

Jemisin writes Sojourner's experience as a black woman on earth with a voice of wisdom and authority. Through her writing, she gives a voice to black girls who have often been relegated to stock side characters instead of the protagonists in our media and in comics. And Jemisin’s storytelling and the tension throughout help the reader understand and empathize with Sojourner's experience.

In an interview with the Washington Post, Jemisin explained some of the issues of "diversity" in the industry. She said many times when people say diversity, they usually mean one "black guy," who is typically male, and they stop seeking other voices. "It's kind of rare to see the lone black person be a woman," she said. She explained this type of diversity leads to tokenism.

Sojourner is most definitely not a token. She represents the Lantern Corps, and the more readers learn about her, the more they realize that, like the other Lanterns, Lantern Mullein is also worthy.

Issue number 5 will be released on March 25, and I highly recommend readers order issues 1-4. Due to coronavirus, Diamond Comics, a major comic distributor, is slowing down production. The distributor announced delays due to shutting down their factories to ensure the safety of their employees from the virus. New comics for this week are currently available, and new comics will be delivered through April 1, the Hollywood Reporter wrote.

After April 1, we might not be getting new comics, but this is a great time to support your local comic book shop and catch up on comics you haven't read. You can order back issues from any comic book shops that are currently doing shipping or curbside pickup: call your local comic book shop to see if that’s possible (here is a nifty link to a comic shop locator). If you live in New York, an all-female comic book shop, Pulp716, is taking telephone orders and offering curbside pickup. I’d also like to shout out Alley Cat Comics, my favorite Chicago-based shop run by an awesome couple – they ship nationally.

Tags: Far Sector , N.K. Jemisin , Green Lantern , comic books , superheroes
Support Feminist Media!
During these troubling political times, independent feminist media is more vital than ever. If our bold, uncensored reporting on women’s issues is important to you, please consider making a donation of $5, $25, $50, or whatever you can afford, to protect and sustain BUST.com.
Thanks so much—we can’t spell BUST without U.