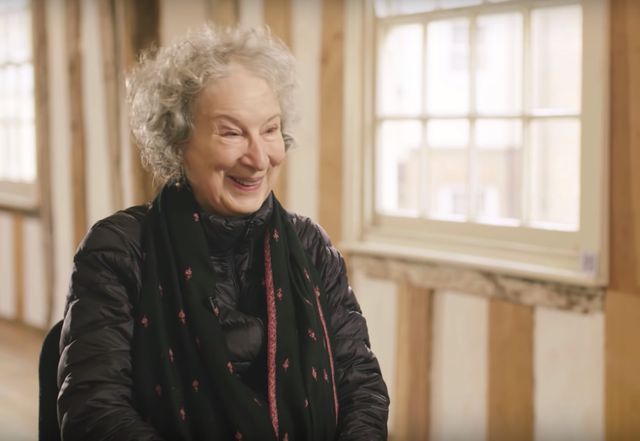 Margaret Atwood, the queen of science fiction and a feminist icon, may have prepared us for dystopia, but not this one. Thankfully, our hero is locked away safely in her home somewhere, social distancing just like the rest of us. And in our time of need, she is here to give us recommendations for the following: plague books, comforting books, and poetry books to read while in quarantine as well as stupid, weird, and mundane things she has done to pass the time.

OK Twitterpals, as I crouch in my burrow, what would you like the most? a) comforting book reccos b) plague book reccos c) poetry book reccos d) stupid/weird/mundane things I have done to pass the time, which would have passed anyway...

One Tuesday, the author took to Twitter to ask her loyal fans which of these recommendation options they would like to see the most. Mia Farrow was the first to reply: “Plague books.”

Atwood promptly responded: “One of the classic non-fictions is Rats, Lice, and History by Hans Zinnser. Guns, Germs and Steel also does pandemics, as does 1491: about what the Americas were like before (and during) the wipeout caused by European microbes + viruses.” What fun.

While plague books might not be for everyone during this time, Atwood proceeded to respond to fans and Tweet out general recommendations to her some 1.9 million followers. The following list is what Atwood recommends we all read/do during these trying times. And as far as I’m concerned, we have no reason not to trust her advice.

1. Oryx and Crake by Margaret Atwood

It would have to be "Oryx and Crake." But I hope you'll start with Frankenstein, and Book III of Gulliver's Travels.

Shameless self-plug! One Twitter user asked Atwood what she would recommend for a class she was planning to teach called “Science As Story.” Alongside her own novel, Atwood recommended Frankenstien and book II of Gulliver’s Travels. Atwood’s own title, Oryx and Crake seems like a great read for this isolating time. A bizarre mix of speculative fiction and what Atwood refers to as “adventure romance,” the tale follows a character called Snowman is his time with primitive, human-like creatures called “crakers.”

2. The Lateness of the World by Carolyn Forche

OK, new poetry book: IN THE LATENESS OF THE WORLD, by wonderful @carolynforche, her first poetry book in 17 years. @penguinpress Gives us some perspective...you could be worse off than self-isolating..

Atwood’s first poetry collection recco comes in the form of Carolyn Forche’s newly published The Lateness of the World, which also happens to be her first collection published in the last 17 years. The work is described as “a tenebrous book of crossings, of migrations across oceans and borders but also between the present and the past, life and death.” In poetry that ventures to explore the world, its end, and history as a whole, we might all find a bit of solace.

3. The Plague by Albert Camus

Another fitting option for plague book recommendations. This existentialist classic — which explores the roles of doctors, commoners, and tourists in the middle of a plague sweeping across France — might just be the perfect read. Atwood also recommends we watch the 1957 film The Seventh Seal, which takes place amidst the black death in Sweden. Apparently, it follows a knight who has to play chess with a death-like figure.

4. The Country Girls by Edna O’Brien, The Age of Inoccence by Edith Wharton, and literally Anything Jane Austen.

Romance, romance, romance! Set in Ireland in the 1950s, the Country Girls triology follows two young Irish girls’ adventures in love. The best part about this recommendation? This series was crucial in breaking the taboo of talking about sexuality and other social issues in a repressive Ireland after WWII. All three of the novels were even banned by the Irish Censorship Board and faced harsh criticism in the country for a time. We love a feminist, banned book moment! The read by Edith Wharton, on the other hand, made her the very first woman to win the Pulitzer Prize. Set in the Gilded Age in New York City, the story follows three young people navigating life and a tragic love triangle.

And with regards to her comment on Jane Austen, Atwood made several points. Austen’s novels are beautifully written, quick to read, classic, and make you feel all warm and fuzzy on the inside. In my opinion, a Jane Austen day sounds like the perfect self-isolation escape. Catch me making tea and scones and watching both the newly-released Emma and the Keira Knightley version of Pride and Prejudice this weekend.

Also strangely comforting are the Inspector Maigret mysteries by George Simenon... so many lovely bistros from the Paris of mid-20th C. The corpses are incidental, it's the food that counts.

Looking for a fun-filled mystery to pass time? Atwood (and I, for that matter!) recommend Georges Simeon’s beloved adventures of Inspector Maigret. There are literally 75 of these easy-to-get-lost-in novels. All of them are pretty quick too, and while there is no shortage of murder and other macabre themes, they’re fun to read. Not to mention, Maigret is always finding himself in peculiar settings, so you can pretend you’re travelling the world from the comfort of your own home.

6. Frozen in Time: The Fate of the Franklin Expedition by John Geiger and Owen Beattie

Yes they had a problem with the lead seals. Those tin cans are still up there on Beechy Island. The lead is like candle wax....inside and out. See @JohnGGeiger FROZEN IN TIME https://t.co/LVAcrJ7Zle

These recommendations are so all over the place, it’s starting to seem as though Atwood has read every book ever written. Which actually wouldn’t be a huge shocker. Either way, if you’re looking for some adventure, this non-fiction read follows the doomed Arctic-expedition led by Sir John Franklin, and the scientific testing on the perfectly preserved bodies of the expeditioners that came 138 years after the fact. Atwood even wrote the introduction to the text, so fans can get her insight on the topic.

And if you want some literary cartoon laughs, try HARK A VAGRANT (the book) by @beatonna. Her Jane Eyre is wild, her Dracula to die for... Also THE SNOOTY BOOKSHOP,
by @tomgauld @DandQ

Described by Atwood as a “literary cartoon,” this webcomic series sees parodies of historical figures fiction characters like Jane Eyre, Dracula, Elizabeth I and all your other favorites in quick little comedic, cartoon scenes. Once on the site, you’ll have a hard time leaving, eager to consume the comics for hours on end. This recco is sure to bring positivity into your day-to-day life.

We’re sensing a theme here….it sounds like Ms. Atwood loves a mystery. Luckily, they are sort of the perfect thing for when you’re getting stir-crazy and want to see some excitement. Anything Agatha Christie is an instant classic, and these two recs from Atwood are the best of the best. With at least 76 titles, going on a Christie binge is sure to get you through the days. Atwood also noted that for some reason, her writing is especially calming and soothing to the soul. Well, that and knitting.

Thank you -- I know the Donna Leons, such fun, but not the Andrea Camilleri... will get! Oh and if you don't know Louise Penny and her mischievously named Inspector Ganache... https://t.co/FimBntbVMG

And in the Witty English Murder column, THUS WAS ADONIS MURDERED, by Sarah Caudwell...
Oh by the way, THE BIRDER MURDERS by Steve Burrows
just got a series deal...

Hello crime fans and Anglophiles, this comedic column sounds like the one for you. Following a witty, rag-tag group of young legal experts trying to solve a murder, we have another recco that encapsulates fun and escapism at its finest.

BONUS ROUND! While Atwood clearly believes reading is the best medicine (she's not wrong), she also offered a handful of other useful tips for while we're all in our separate burrows.

OK, 1 stupid thing. Time to tidy the food cupboard...found 3 packs of dried shitake mushrooms from, um, 2012. True to my 1930s wastenothing parents, boiled them+ran them through blender, aiming to make a mushroom soup. Darn near poisoned self! They'll be great in the compost eh? https://t.co/3htpaF1VzI

This falls under recommendation option “D,” or, weird/stupid/mundane things the Canadian writer has been doing to pass the time. This sounds like very good advice. Organizing and cleaning can be a perfect remedy for stress and unease. Not to mention, you might find something useful. For example, Atwood found 8-year-old packets of dried mushrooms which she blended into a soup. Although, as she quickly realized, she might poison herself, and she opted to throw them in the compost bin instead.

This one is probably pretty self-explanatory. Although we have to wonder why Atwood has so many ancient, eclectic foods hidden throughout her home.

While we're not sure where this recco came from exactly, it feels necessary to include. Like, yes, Margaret, I do need to look at an adorable little Australian creature at this anxiety-inducing time.

See? Margaret Atwood came through to save us from ourselves with her magical, writerly powers once again. And while we would just like to see Atwood herself write a novel in real time like one Twitter user suggested, these reccomendations are helpful enough to get us through the next few weeks.

I'm sure we'll be keeping the words and worlds of Atwood close during these times. And hey, if none of these options float your boat, you could just read and/or watch The Handmaid's Tale again. Really, it never gets old.

7 Dystopian And Isolating Books By Women To Read ATM