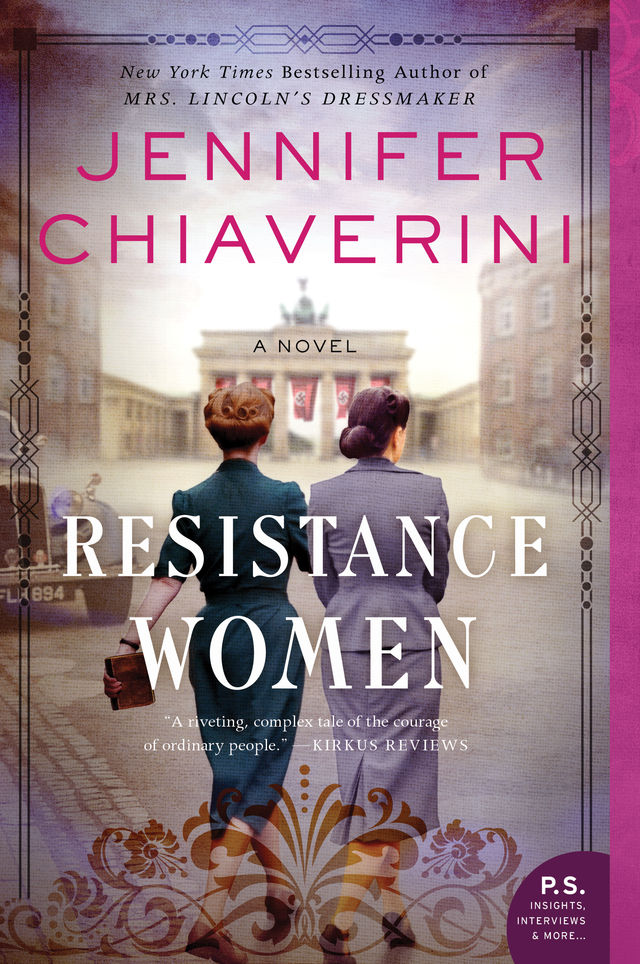 Below is an excerpt from the book RESISTANCE WOMEN by Jennifer Chiaverini, a historical fiction novel based on the true story of an all-women espionage network who helped fight against Hitler in 1930s Berlin. Resistance Women is on sale now.

From the moment the crackdown on avowed and suspected Communists began, Mildred feared for Arvid’s safety. His publications and lectures made his academic interest in the Soviet Union’s Five-Year Plan a matter of public record, and his recent travels there and the founding of ARPLAN provided more evidence against him. People often erroneously assumed he was a Communist until he set them straight, but the National Socialists were unlikely to give him the benefit of the doubt.

As reports of arrests and violence flew through Berlin, Mildred persuaded Arvid to leave the city immediately after he cast his ballot. Pretending they had been called to Jena on a family emergency, they took a room at a remote country inn on the outskirts of Berlin, where they could study, write, and follow the news of the election returns in anonymous safety.

They worried about their outspoken friends and family who had not taken such precautions. Arvid’s cousin Dietrich Bonhoeffer continued to preach against fascism and to publish essays criticizing the Nazis and the fanatics who followed them. His brother Klaus, a lawyer, had publicly questioned the legality of the Nazis’ refusal to allow the Communist delegates to be seated in the Reichstag. Their father Karl Bonhoeffer, a prominent psychiatrist and neurologist at the University of Berlin, regularly discussed Adolf Hitler’s disturbing behavior and possible symptoms of mental illness with professional colleagues. The Harnacks, the Bonhoeffers, the Dohnanyis, the Delbrucks— the entire clan was united in their abhorrence of Hitler and the Nazis. The only exception was Inge’s husband, Gustav, who made family gatherings uncomfortable and infuriated his son Wolfgang with his increasingly ardent praise for the National Socialists’ so-called accomplishments. Mildred and Arvid agreed that Gustav would be safe from persecution, and probably Inge and even Wolfgang by extension, but many other members of their extended family were in danger of arrest.

Three days after the election, wondering what her family back in America might have read about the turmoil in Germany, brooding over what indiscreet remarks they might put in letters that would soon land in her unattended mailbox, Mildred wrote to her mother to let her know they had temporarily left the city.

“We have come to a little country hotel in the woods outside Berlin where it is quieter,” she wrote. “Our curious ideas are not known here. We are safe, very well, and happy. Who would bother about two students sitting off in a corner and thinking thoughts about the future of the world? So don’t worry about us at all.” Then she added a note of caution. “And best keep still. If anyone asks you about us, we are not interested in the world from a political but from a scientific standpoint. That’s all you need to say.”

With the right to privacy of correspondence abolished, Mildred could not be certain when she might again be able to write to her mother more frankly than that.

She and Arvid could not remain at the inn indefinitely without burning through their savings and losing their jobs, so when the immediate danger faded, they returned home, wary that they might be walking into a trap. Their apprehensions eased as the days passed and Arvid was not arrested at the office, nor did the SA pound on their door in the dead of night. Many of Mildred’s students were anxious, and when they met in the privacy of the Harnacks’ flat, the study group could speak of little else but what would become of Germany now that the unthinkable had happened and Hitler had become chancellor.

When Sara Weitz mentioned that her mother wanted to emigrate, other Jews in the group nodded somberly, admitting that they too had considered leaving the country. But where would they go, and why should they leave? They were Germans. They had been born in Germany, as had their parents before them. For some, their German heritage stretched back more generations than they could recall. Politicians came and went; Hitler was ascending now but he would fall out of favor eventually. Besides, if all of Hitler’s opponents fled, who would remain to defend the country they loved?

One evening a fortnight after the election, Mildred returned home from her classes at the Berlin Abendgymnasium to find Arvid seated in the cupola, staring out of the window. He had hung his coat in its usual place by the door, but he had forgotten to remove his hat.

“Darling?” she called anxiously as she locked the door behind her. “Is something wrong?”

He turned away from the window, removed his glasses, and rubbed his eyes. “I heard from Rowohlt today.”

“Your publisher?” Mildred hung up her coat beside Arvid’s and joined him in the cupola. She sat on the armrest of his chair, gently removed his hat, and smoothed his hair back in place. “What did they want?”

“But it’s coming out next month!”

“They say they have no choice.” He reached for her hand. “No one dares publish a book about communism or the Soviet Union now. It’s too controversial, too dangerous. They fear that everyone in the publishing house would be thrown into prison.”

Copyright © 2019 by Jennifer Chiaverini, on sale now from William Morrow Paperbacks, an imprint of HarperCollins Publishers. Reprinted by permission.

The Power of Popular Fiction For Thomas Cromwell And Wolf Hall

Jennifer Chiaverini is the New York Times bestselling author of several acclaimed historical novels and the beloved Elm Creek Quilts series. A graduate of the University of Notre Dame and the University of Chicago, she lives with her husband and two sons in Madison, Wisconsin.
Visit Jennifer’s Website: https://jenniferchiaverini.com/
Find her on Facebook: @JenniferChiaveriniAuthor