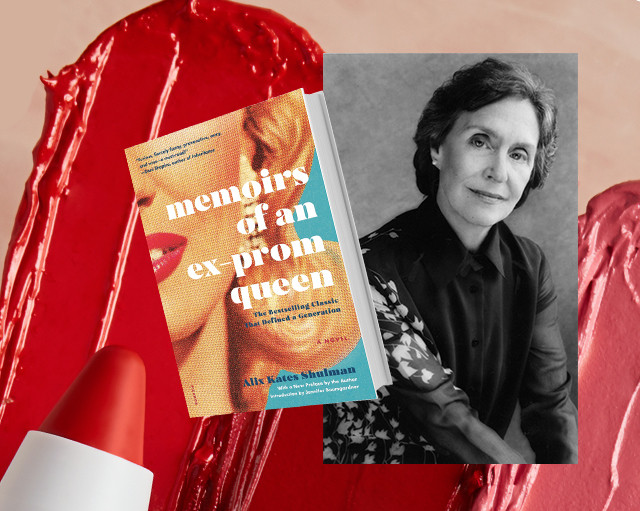 “IS SHE REALLY 87?” BUST intern Kerry asks while transcribing my interview with Alix Kates Shulman. “I...I can’t believe she’s talking about those things!”
Yes, she’s really 87. But Shulman is one of the youngest 87-year-olds you’ll ever have the pleasure of meeting. And indeed, she has long been willing to “talk about those things.” Her groundbreaking 1972 book, Memoirs of an Ex-Prom Queen, was her way of introducing “those things” to the world; of exposing truths about women and sex that simply weren’t being told. And now, for Memoirs’ 45th birthday, the novel is being reissued.

Shulman’s book-lined West Village loft is exactly the kind of apartment you’d expect from someone who’s written 12 books and was a founding second-wave feminist. Shulman was there in 1968 at the famous Miss America pageant protest, and attended consciousness-raising groups in N.Y.C. with names like Redstockings and WITCH, where women shared their frustrations and anger, and discussed how to change things.

In the book, a white, middle-class woman from the midwest named Sasha experiences many of the issues that women faced in the pre-feminist ’60s. Her husband rapes her after she threatens to leave him. She is almost raped at work, has an affair with her professor, and is ignored by her second husband once they’ve had children. And all the hard work she did in university has been mostly forgotten; tossed aside by the expectations for women in her era.

But despite the title including the word “memoir,” the story is very much fictional, says Shulman. While some aspects of Sasha’s life run parallel to that of Shulman’s, her tale is actually the amalgamation of a number of women’s stories. “I wanted to show everything that we were talking about, in consciousness-raising,” Shulman explains.
Even before the book was published, the manuscript was being excitedly passed around between female employees of big publishing houses. And once it was published, it became a literary sensation. Not everyone got it, though; especially not institutions like The New York Times, which called it “an angry little book.” “I think what the reviewers were responding to, was the relentlessness of male contempt [for women],” she says. “I’m sure that was recognizable. These young women were relegated in the publishing industry to being secretaries or file clerks or receptionists—how could they not be angry about that? How could they not be glad to see this called out?”

A former prom queen, Sasha is very concerned with her appearance. “Looks were an advantage for getting a husband, and getting a husband was everything,” Shulman explains. “You couldn’t even go to upscale restaurants in the evening if you were a woman alone or even two women. You had to have a man with you. It’s very hard for people to understand what it was like then. When Sasha is concerned about losing her looks, it’s about [losing] her power.”

Having recently watched Fleabag, I tell Shulman that I saw a lot of parallels between Fleabag and Sasha. Both women seem to be really into sex, but most of the sex they have is bad. “One of my goals was to show bad sex,” she explains. “But I don’t think [Sasha’s] ‘into’ sex. I think she has a lot of sex, not because she wants it, but because she is repeatedly in a situation where she has to have it. I wanted to portray her as someone with agency, but the limitations that sexism and misogyny imposed on her at every turn made it very difficult for her to do what she wanted.”

When I ask Shulman if she is surprised that women are still having such bad sex, her response is swift. “Not really,” she says. “And the reason is that the power relations between genders haven’t changed much. I think it takes a lot of trust and caring for good sex to happen—for women at least.”

What New Generations Can Learn From Elizabeth Wurtzel's Legacy