Ali Wong Continues To Be Hilariously Raunchy In "Dear Girls" 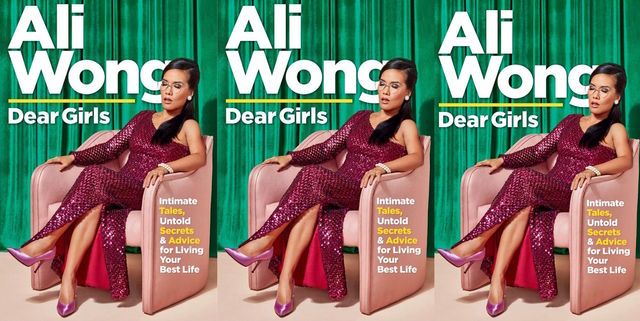 If you’re an Ali Wong fan, Dear Girls is the perfect addition to your bookshelf. The comedian, actress and writer is every bit as hilarious and raunchy in her new memoir as she is on stage. Yet the jokes and OMG moments don’t translate as smoothly to a book and seem better suited for the stage. Wong spends the preface emphasizing that she’s an “idiot” who shouldn’t be writing a book. And while her ability to embrace imperfection is inspiring,Dear Girls ends up feeling unfocused as a result.

The book is framed as a series of letters addressed to Wong’s daughters, which renders awkwardly when the intended audience is obviously the general public and the author is not “Mommy.” For the majority, we don’t hear Wong impart “secrets and advice for living your best life.” Instead we get lengthy, graphic descriptions of her sexual history, which are funny, but don’t really serve a point.

Dear Girls picks up speed in the middle when Wong moves on from graphic sex chronicles to graphic family chronicles. The chapters about her parents and siblings are as hysterical as they are poignant: when discussing reasons as to why more women aren’t stand-up comics, Wong presents an astute theory that safety is a major factor. "When I go on the road, I have to get into a car with a stranger four times a day," she writes. "For a man that’s considered an adventure, full of potential man shenanigans like in The Hangover."

However, the book ends on a sour note. The final chapter is written by Wong’s husband, Justin Hakuta, who attempts to come off as self-aware through his descriptions about coming from a high-achieving family as well as being married to someone who’s more successful and makes more money than he does, even though he graduated from Harvard Business School (Harvard Business School is mentioned a lot). His descriptions of bringing his children home from the hospital accompany the most irritating part of the chapter, in which he writes about the parental instincts kicking in, “along with relatives and Sofiya, your magical Ukranian nanny.”

Now, there is nothing wrong with having a nanny or any kind of help when raising children. But a caregiver is not something that just “kicks in” naturally. Hakuta’s narrative likens the “magical” Sofiya to a household appliance as opposed to an individual committing herself to help raise his children. Wong also doesn’t mention her once throughout the book, which is disappointing considering she spends an entire chapter waxing poetic about the challenges of parenting. She praises her husband and mother for being so involved but, for whatever reason, Sofiya, who has a significant impact in the children’s upbringing, is not acknowledged.

Overall, Dear Girls is worth a read, but I’d advise skipping the last chapter.

Tags: Ali Wong , Comedian , Dear Girls , Baby Cobra , Hard Knock Wife , Always Be My Maybe , books , book review
Support Feminist Media!
During these troubling political times, independent feminist media is more vital than ever. If our bold, uncensored reporting on women’s issues is important to you, please consider making a donation of $5, $25, $50, or whatever you can afford, to protect and sustain BUST.com.
Thanks so much—we can’t spell BUST without U.