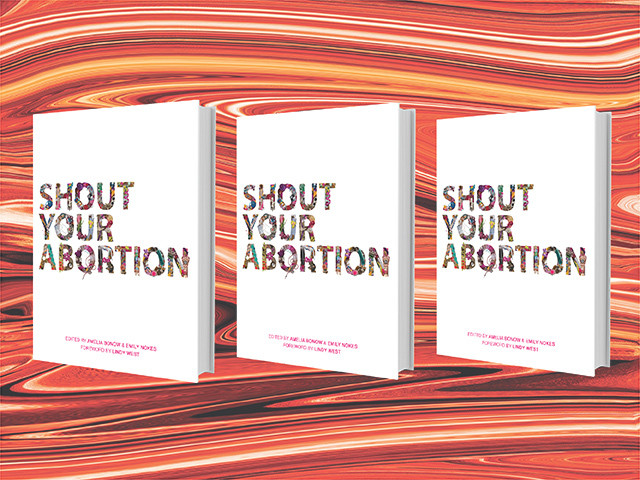 With the recent anti-abortion laws passed in Georgia, Ohio, Missouri, and Alabama, now seems to be an especially crucial time for Shout Your Abortion, a book which aims to release the stigma around abortions as well as normalize them as being an essential part of women’s reproductive health. The online grassroots movement began when the U.S. Congress voted to defund Planned Parenthood and editor Amelia Bonow opted to share her experience obtaining an abortion on social media. Her status update quickly went viral with the hashtag #shoutyourabortion, as people from all over the world shared their own stories. This led to a series of ‘zines and eventually this book, which compiles differing experiences from those who have had abortions.

While the stories vary greatly, each reaches the same unapologetic conclusion: that having an abortion was the right decision. The book has an immensely appealing design (created by co-editor and BUST music editor Emily Nokes) giving it a colorful DIY aesthetic. And stories are interspersed with eye-catching artwork, photography, and comics. Clearly, this book succeeds in its mission to lift stigmas and shed a light on the importance of abortion access. (5/5)

Shout Your Abortion was published November 1, 2018. This article originally appeared in the September/October 2019 print edition of BUST Magazine. Subscribe today!

“Shout Your Abortion” Is Creating A Book To Break The Silence