Healing Queer Heartbreak in Amber Smith’s “Something Like Gravity” 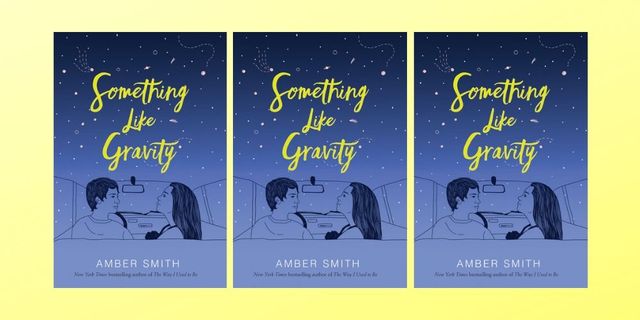 The last time I sat down to read a teen romance novel, I was twelve and the book was Breaking Dawn, the final installment of Stephenie Meyer’s Twilight Saga. I was so young I could not even imagine queerness for myself, let alone read it in books from the library. It was easier to imagine werewolves at my middle school than the lesbians or trans folk that now surround me. At twelve, I was squarely invested in the whole Edward-Bella soulmate spiel, though vaguely put off by the glorification of marriage and premature and ostensibly eternal commitment. Over ten years later, I can now identify what made me so uneasy: not the romance between Bella and Edward (though it was a deeply disturbing and abusive relationship), but the romanticization of the pair’s cis-heterosexuality. Destiny, magical transformations of humans into wolves and vampires, godlike beauty, and the sacredness of virginity imprinted on my youth and tangled into my understandings of love, “proper” gender performance, and sexuality.

The vast majority of YA novels out there made it difficult to envision – let alone find reflected – the real queer romance I would experience as an adult. Romance where gender presentation wasn’t always firmly anchored and didn’t dictate behavior, where we laughed at the idea of virginity and experienced fluid relationships where power is named and exchanged. At twelve, my books were telling me I was more likely to be wooed by a 200-year-old vampire than to experience that kind of romantic relationship.

The antidote to Twilight, however, is not gross, hypersexualized, and ultimately traumatic queerness a la Blue Is the Warmest Color. It looks more like Amber Smith’s Something Like Gravity. Smith, who you may recognize as the New York Times-bestselling author of The Way I Used to Be, is known to privilege complex, often woman-centered stories which explore how teens come to terms with trauma, family, grief, sexuality, and themselves.

Something Like Gravity is about Maia and Chris, two teens who become next-door neighbors when Chris moves in with his eccentric aunt for the summer. Maia is used to living in an empty, rural, and wide-open town. There are no secrets in Carson, North Carolina, and that makes Maia’s grief excruciatingly public: her older, artistic, and beautiful sister died not long before the novel’s open, and Maia feels like the unwanted, leftover daughter caught between bickering parents. Due to money problems, Maia’s parents are forced to live in the same house while effectively separated. Tensions are high, and Maia, desperate for some privacy, isolates herself – until she meets Chris, a boy who loves astronomy and has a dark past of his own. The two teens are drawn to each other. And, like gravity, their orbits pull them closer and closer together until the two fall in love. Recently out as trans, Chris’ parents are tailspinning over their son’s appearance and name change. Then, when Chris is brutally attacked by a group of transphobic boys, he’s sent off to North Carolina to cool off and give his parents time to process.

The relationship between Maia and Chris feels fragile, deep, and authentic. The two navigate Chris’ transness without making the book about being trans. They talk about family, sexuality, and desire with generosity and openness. There’s no confusion or shame about their desires, and Smith treats their relationship with a respect not often afforded to young people. It feels natural and sweet as the two practice enthusiastic consent or go on day trips in Chris’ beat-up car. Something Like Gravity is just what a summer romance should be: brief, bright, and bittersweet. Maia and Chris don’t get married or glitter in the sun. But they do warm to each other, grow, succeed and fail together. Something Like Gravity is the understated, healing answer to many of my own teenage heartbreaks.

Smith’s novel excites me, both as a lesbian and as a reader, and I wonder at the teens reading this book in their school libraries: passing over the typical, the cis, the heterosexual, and instead finding something like themselves.

sara gregory (they them + she her) is a lesbian writer. In addition to editing and reviewing for the journal Sinister Wisdom, Sara most recently curated the 2019 Sinister Wisdom Calendar, which celebrates lesbian and queer histories as creative, incendiary, and ongoing. Sara now works in the labor movement and organizes in higher education. She has been published in Jezebel, Bitch Media, Autostraddle, and The Advocate, among others. Find Sara on Twitter @SGregory91 or on Instagram @sinister.spinster.