Details
BY Mary Pauline Lowry
IN Books
Published: 13 May 2019 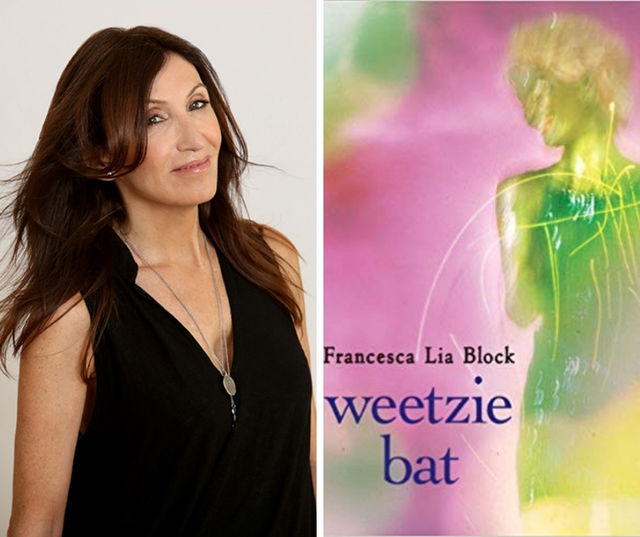 Thirty years ago, HarperCollins published Francesca Lia Block’s debut novel Weetzie Bat, about Weetzie, a high schooler who roams a lush, enchanted Los Angeles with her gay best friend Dirk, both of them looking for love. I first read a galley copy of the novel in 1989, when I was 13 years old and as I finished the first chapter, I knew the way I perceived love, life, and the City of Angels would never be the same.

As soon as I finished Weetzie Bat, I couldn’t wait for Francecsca Lia Block to write another novel. Luckily for me, Block has been as prolific as her writing is magical. Three decades later, Block has published more than twenty-five award-winning books of fiction, non-fiction, short stories, memoir, and poetry, which have been published in over ten languages.

I caught up with her in Los Angeles, where she was born, raised and still lives, writes, and teaches fiction, both privately and at nearby universities such as University of the Redlands, where she was a Visiting Assistant Professor in Creative Writing for 2018-19 and was a finalist for Professor of the Year award.

What is it like for you to consider that 30 years after the publication of your debut novel Weetzie Bat, it’s still an iconic novel, a cult classic and a favorite of many readers and authors who came of age reading it? What are the ups and downs (if any) of that?
I’ve made so many friends and met wonderful artistic collaborators who were originally readers of Weetzie Bat and I feel very grateful for that. It has enriched my life in so many ways. The only down side is that I’ve also written a lot of other things, including many adult publications, that sometimes gets overlooked because of the focus on my first book.

Your two most recent novels, The Elementals and Beyond the Pale Motel, are different from each other in many ways, but both have your signature lush language and strong sense of place. They also both deal with women who go missing. What drove you to write about this subject matter? Both of these novels have such a strong element of suspense. Was that a conscious choice for you?
I really enjoy stories with suspenseful plots and poetic voices (Donna Tartt and Tana French) so that was definitely intentional. I think the missing women are a commentary on the dangers women face and also a metaphor for my own sense of self-loss at different periods of my life.

Beyond the Pale Motel had a thread about the importance of self-love and the ways women’s quest for beauty can become a form of self-abuse. (For example, the narrator wears heels that hurt her feet, gets Botox injections that bruise her face, etc). Can you talk about this concept and why it might be important for your readers (or any women)?
I think this is rampant and needs to be addressed. I certainly struggle with it myself, even now.

You recently published The Thorn Necklace: Healing Through Writing and the Creative Process, which is both a memoir about your life and writing and a craft book. Can you talk about The Thorn Necklace, why you wrote it, and what response you’ve received from fans?
The response has been overwhelming. I feel so lucky I got to publish this book about the craft of writing and my personal experiences. I wrote it as a way to share my knowledge as a writer and writing professor and my struggles as a person, and as a way to hopefully help others.

What kinds of writing projects do you currently have in the works?
The Sea of Bones is a novel about a woman who becomes involved with a fertility cult while searching for her missing boyfriend around the Salton Sea. I wrote it with the help of my professors Stephen Graham Jones and Jill Alexander Essbaum at UCR/Palm Desert where I am getting my MFA. I also wrote a screenplay based on The Elementals and I’m working on one of The Sea of Bones with Joshua Malkin in my screenwriting cross genre.

If you could say one thing to fans who have read and loved your books anytime in the past thirty years, what would it be?
Thank you. I love you.

Last summer, casting was announced for a film adaptation of Weetzie Bat. Can you update us on that project?
It’s in development, but I don’t have any details. We’ll see…

To find out more about Francesca Lia Block’s writing, her in-person classes and, online coaching, go to her site.

Mary Pauline Lowry is the author of Wildfire. Her comic novel The Roxy Letters will be published by Simon & Schuster in April 2020. She's a regular contributor to O Magazine and her work has appeared in the New York Times, New York Times Magazine, The Millions, and other publications. You can follow her on Twitter @MaryPLowry or check out her work at www.marypaulinelowry.com.