How Georgian and Regency Literature Shaped Society's View Of Cats

Details
BY Mimi Matthews
IN Books
Published: 08 May 2019 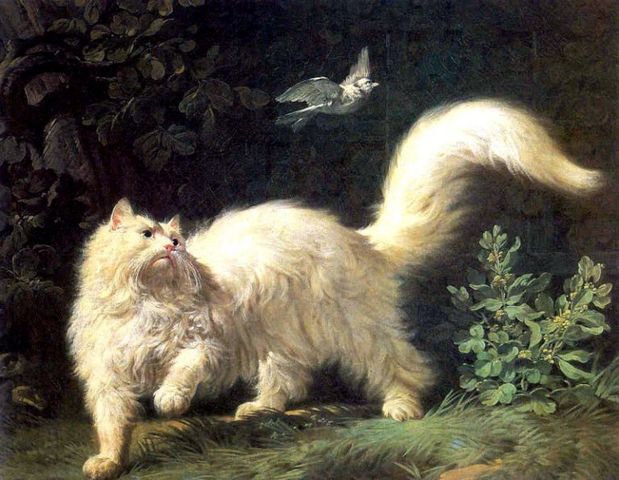 As popular a pet as cats are in modern day households, it was the dog that dominated the home and hearth of the 18th and early 19th century. Cats had their admirers, of course, amongst whom were such literary luminaries as Samuel Johnson and Lord Byron, but in general, their primary value lay in their ability to keep the premises free from vermin.

It would be some time before cats were viewed as favorably as dogs. Part of this can be blamed on the literature of the day. In stories featuring animals, courage and loyalty were traits frequently assigned as canine virtues, while cats were often portrayed as sly, self-serving opportunists. Just think of Puss in Boots (16th century), wherein the title character achieves his ends through trickery and deceit. 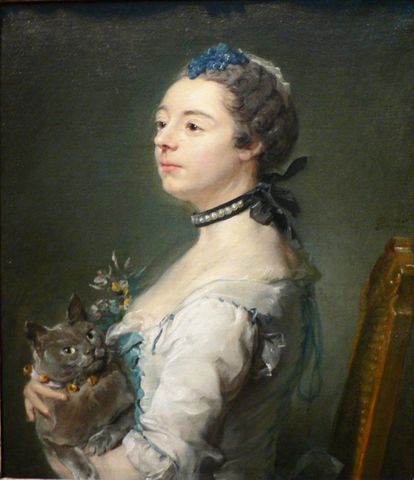 A 1712 poem titled A Fable of the Widow and her Cat details the downfall of an unprincipled feline who has exploited the widow who owns him. Largely attributed to poet Jonathan Swift, the poem is, in fact, a satirical commentary on the conduct of John Churchill, first Duke of Marlborough. Marlborough was formally accused of embezzlement in 1711. As a result, Queen Anne (represented by the widow of the piece) dismissed him from all of his appointments. I have included the poem in its entirety for your perusal.

THE WIDOW AND HER CAT.

A Widow kept a favourite cat,
At first a gentle creature;
But when he was grown sleek and fat,
With many a mouse, and many a rat,
He soon disclos’d his nature.

II.
The fox and he were friends of old,
Nor could they now be parted;
They nightly slunk to rob the fold,
Devour’d the lambs, the fleeces sold
And Puss grew lion-hearted.

III.
He scratch’d her maid, he stole the cream,
He tore her best lac’d pinner;
Nor Chanticleer upon the beam,
Nor chick, nor duckling, ‘scapes, when Grim
Invites the fox to dinner.

IV.
The dame full wisely did decree,
For fear he would dispatch more,
That the false wretch should worried be;
But in a saucy manner he
Thus speech’d it, like a Lechmere:

V.
“Must I, against all right and law,
“Like pole-cat vile be treated?
“I! who so long with tooth and claw
“Have kept domestic mice in awe,
“And foreign foes defeated!

VI.
“Your golden-pippins, and your pies,
“How oft’ have I defended!
“Tis true, the pinner which you prize
“I tore in frolick; to your eyes

VIII.
“Of this we’ll grant you stand acquit,
“But not of your outrages:
“Tell me, Perfidious was it fit
“To make my cream a perquisite,
“And steal, to mend your wages?

IX.
“So flagrant is thy insolence,
“So vile thy breach of trust is;
“That longer with thee to dispense,
“Were want of power, or want of sense —
“Here, Towzer! — do him justice.” 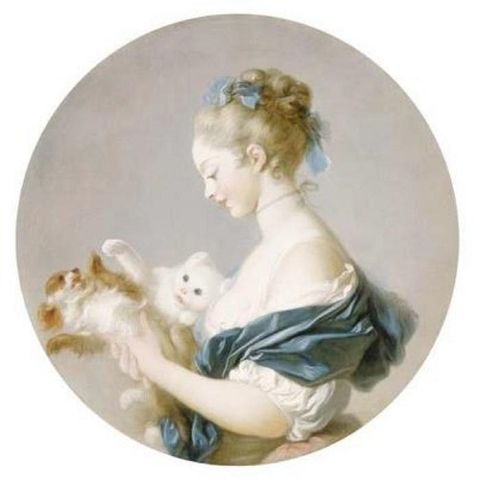 The housecat was not always a literary synonym for unprincipled villainy. In the following excerpt of a short story featured in the March 1784 edition of The Wit’s Magazine, the heroine – a luckless young lady named Phebe – is assisted by her cat when no one else (not even a dog!) will come to her aid.

“As she looked down the lawn, she saw, with surprise, her favourite cat, to which she had always been very kind, coming trotting after her…She burst into tears when she beheld the faithful animal come purring by her side, and looking up, as if in pity of her fate. The cat seemed to be guided by a superior instinct: there were three paths led from where her mistress sat, and she took one of them, and looked back as if inviting Phebe to follow; which action she repeated several times…”

You will note that the cat in this story is not only capable of sympathy, she is also possessed of a “superior instinct” and intelligence, guiding her young mistress safely through the dark. As if this is not proof enough of the cat’s value, the cat next leads her mistress to a sumptuous dinner.

“The cat had not gone far, before she turned a little from the way to a bush, and stopped, then went back to meet her mistress and returned to the same spot: this incited Phebe’s curiosity, and she followed to the bush. Here she found a clean white napkin, and in it a part of a very ﬁne capon with some good wheaten bread. Phebe’s feelings may easily be imagined; she sat herself upon the bank and divided her treasure with her friend.”

The author goes on to paint the cat in an even more heroic light by having her save her mistress from a fearsome bull.

“[Phebe] presently rose from her repast, and her cat still ran before, as if to conduct her. They came presently to a place where the stile had been hedged up, to prevent passengers from coming any more that road; the cat turned down the side of the hedge, and found a clear gap. When they came into the next ﬁeld, a ﬁerce bull ran bellowing, as soon as he saw Phebe, to attack her; but the cat placed herself between them, and seemed to spit fire in his eyes; at which he was so terriﬁed and pained, that he ran roaring away…” 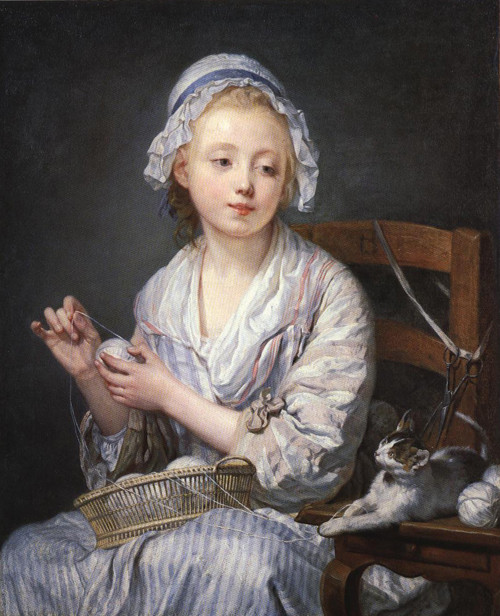 Of course, it was still the 1780s and, as remarkable as the cat was, she was still just a cat – as illustrated when the valiant little feline is disposed of rather grimly only pages before our heroine reaches her happy ending.

“To add to the terrors that surrounded her, the generous animal that went before her, scarcely at more than a yard’s distance, and that every moment kept turning it’s luminous eyes, as if to light and guide it’s mistress, suddenly tumbled down a precipice, and, by its cries, gave Phebe, whose feet were upon the very brink, warning of her danger, and its own apparent destruction.”

An unfortunate accident, to be sure, but almost worth it in order to read the heartfelt reaction of one of the characters upon hearing of the cat’s demise:

“The Lord of heavenly mercy bless me,” cried John Audley, “and save the soul of that poor cat, who, I warrant, was a better Christian than some of us.” 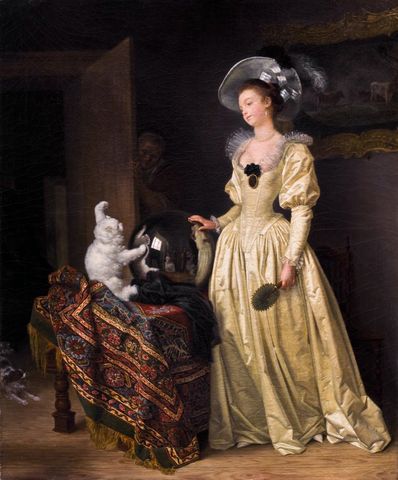 An article in the 1811 edition of The Reflector, titled Inquiries Concerning Instinct, goes one step further in rehabilitating the reputation of the cat. The Reflector was a quarterly magazine edited by Leigh Hunt (founder of the Cockney School and good friend to both John Keats and Percy Shelley). Instead of satire or fictional tales, the author of the piece examines the nature of animals from a scientific and philosophical standpoint.

“That some animals not only display wonderful sagacity and docility, but also reason on several occasions, is, I think, clear from the most satisfactory evidence. And, having already shewn that some of their actions are instinctive, I shall now endeavour to shew, as the contrary supposition has crept into the writings of philosophers, that several of them are undoubtedly rational also…

“One of my friends, on whose judgment and veracity I can rely with the utmost confidence, had a tame bird which she was in the habit of letting out of its cage about her room every day. One morning after breakfast, as the bird was picking some crumbs of bread off the carpet, her cat, who always before shewed great kindness for the bird, and was then near her, seized it on a sudden, and jumped with it in her mouth upon a table. The lady, perfectly astonished and alarmed for the fate of her favourite, on turning about observed that the door had been left open, and that a strange cat had just come into the room. After turning it out and shutting the door, her own cat came down from its place of safety, and dropped the bird without injuring, if I may so express myself, a hair of its head.” 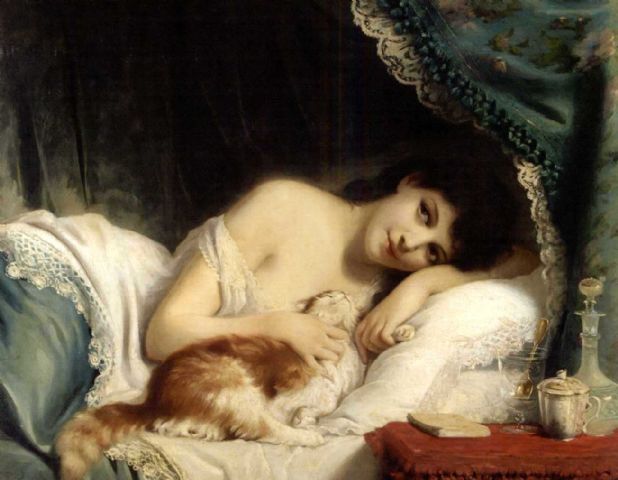 The cat has come a very long way since its early depictions in literature. Today, cats in novels are cast as loving companions, courageous sidekicks, comic foils, and even, occasionally, as the main character. And yes, every so often there is still a cat depicted in a negative light or, even worse, portrayed merely as a means of illustrating a human character’s cruelty and depravity.

How are cats portrayed in your favorite novels? How would you like to see them portrayed? Leave your answers in the comments section below! 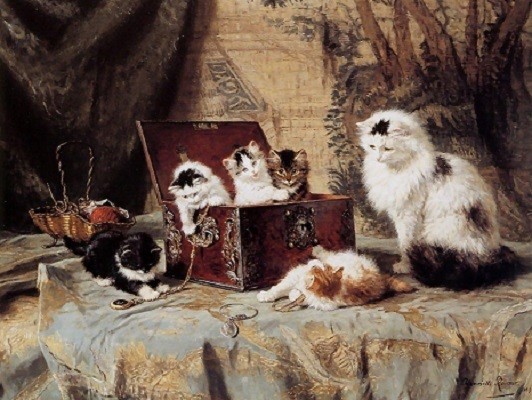 Thus concludes another of my Friday features on Animals in Literature and History. I did not focus on a particular breed this week, but here are a few hard facts:

More than 1.4 million of those cats are euthanized.

We can all help to decrease these numbers by having our companion pets spayed or neutered. If you would like to do more, even a small donation of your time or money to a local shelter or rescue organization can have a profound impact on the lives of cats in need. I encourage you to utilize the below links as resources: