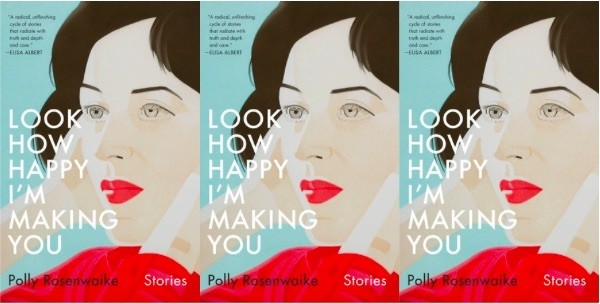 Polly Rosenwaike’s debut story collection, Look How Happy I’m Making You, examines the period of early motherhood. Her characters are women in the throes of all aspects of reproduction—from breastfeeding to infertility, from morning sickness to abortion—and she portrays them not with the time-honored air-brush of pale pinks and blues, but in a bold palate full of contrasts, with candid, emotional empathy and raw somatic rigor. There is blood and discharge and spit-up. There are sore parts and torn parts; there are women hopeful, raw, and ravaged. With two of our children at school and one home sick on the couch, Polly and I spoke by phone from our homes in Michigan and Seattle.

Tell me the backstory of this book. What inspired you?

After my first daughter was born, I didn’t write fiction for over a year, and then I slowly got back into it. I was sitting in the library one afternoon, paying for her to go to day care, and I thought, why don’t I write a collection that chronicles this period I’ve been going through, this time in women’s lives of choosing to become mothers? That idea solved the problem I felt I was having of what my book would be about—I’d been writing stories for years, but I didn’t have a particular focus—and it gave me much more direction in moving forward. I already had several stories that fit the theme. I knew that I still wanted to have a story about miscarriage, and a story about postpartum depression, and a story about sleep training. The book became a chronology of different characters’ experiences with pregnancy and new motherhood.

Books about motherhood have become a thing. What made you want to jump into this trend pond?

When I had the idea for the collection and wrote a number of the stories, I hadn’t yet read some of my favorite books about motherhood. I didn’t think of myself as necessarily entering into a conversation that was out there—I just wanted to tap into this intense experience I’d had and explore some of its emotional challenges through fiction. Then Jenny Offill’s Department of Speculationcame out, and I thought, now this is the novel I really wish I could have written. I think Offill’s mention of Rachel Cusk’s A Life’s Workon her website led me to that memoir, which I adore and see as a kind of bible about the darkness of early motherhood. Helen Simpson’s story collection Getting a Lifeis amazing: I would like to have written that, too. So in reading these books, I’ve tried to consider how mine might fit into this growing canon of sorts. But I’d also like to think that writing about motherhood isn’t just a trend. If we care about women’s experiences, then we should keep seeking out books about what it’s like to become a mother.

Angela Garbes’ recent piece in The Cut makes the argument that most of the motherhood books being talked about focus on middle-class white women. How do your stories add to this conversation?

I read that piece, too, and thought, yep, my book totally falls into that category. I absolutely agree with Garbes that we need to think about why the conversation about motherhood books has been narrow. I wrote about characters in this white, middle-class, well-educated demographic because that’s what I’m in, that’s what I know. But I do see it as a limitation of my own work. I, too, am looking for more books that represent more diverse experiences, and I hope to encourage them in whatever way I can.

The range of reproductive situations in these stories is huge, from miscarriage to accidental pregnancy, abortion to adoption. How do you see these stories in relation to our political moment in time?

The story "Field Notes" is about a woman choosing abortion, and it was important to me to have that story in the book alongside stories of women choosing to continue their pregnancies. We need to represent a range of narratives about abortion and not see it as something that can’t be talked about or that can only be presented as a debate rather than as an account of an experience.

It also feels politically inflected to talk about women’s bodies and pregnancy and childbirth as experiences that women uniquely have, and to consider that these aspects of women’s health and lives are often underfunded, undervalued. They’re often represented in limited ways. I don’t include direct political statements in the collection, but I do see it as very much a feminist book that says we need to pay better attention to women—not just as baby-makers, but as people.

You write about the nitty gritty aspects of the human body, and specifically women’s experiences with their bodies—periods, abortions, miscarriages, breastfeeding, sex while pregnant or bleeding, to name a few. Tell me about this deliberate choice.

In “Period, Ellipsis, Full Stop” I wanted to write about both the strangeness and the normality of getting a period, to think about how girls react to that process beginning in their bodies, and how women continue to talk about it, or not talk about it. I was explaining to my eight-year-old-daughter what it would be like (to get her period) and realizing that I had some power in the way I presented this information. I was trying to discuss it as just an ordinary thing, but it was hard, and I could see her recoiling a bit, like, blood’s going to come from where?

At one point, my editor said to me, “I don’t think I’ve read a story before where a guy takes out a woman’s tampon.” But these things happen, you know, and I wanted to write about those experiences that many women have that you don’t discuss in polite company. Breastfeeding is often presented as beautiful and blissful, but there can be intense pain and difficulty in that activity. I had a really hard time with it, and it was important for me to put that into the book, especially in “Ten Warning Signs of Postpartum Depression”—to show new mothers struggling with what’s considered a natural, uncomplicated, female thing.

It’s amazing when you think about what all of these biological processes make possible, but it can also be terrifying, as a woman, to bear so much responsibility for reproduction. In “Period, Ellipsis, Full Stop” again, Cora attaches her fear of failure in various areas of her life to her experience of having a miscarriage. Of course having a miscarriage is not an indication of a woman’s failure, but a lot of people get stuck in thinking of miscarriage as shameful, as being somehow their fault. And there’s this deeply rooted idea that being on your period is embarrassing, unclean. My hope is that the more these things  become normalized through candid discussion, the less frequently women will be trapped in unhelpful and painful narratives.

Motherhood is both a moment in time and a long continuum. I like the way your stories reach beyond the early motherhood time period and get at the complexities of motherhood, mothers, mothering—for all women, mothers themselves or not. How did you think about this continuum as you crafted the stories for this book?

Most of the main characters in these stories have hardly experienced motherhood yet. They’ve experienced pregnancy, and maybe the awe and shock of having a new baby. But taking care of children who can argue with you, who ask hard questions and challenge your ability to explain the world—I haven’t scratched the surface of that! In a way, I see this as a coming-of-age book. These young women are making decisions about romantic partners; questioning whether they want to have children and, if they do, how that will affect their other relationships; reacting to how they’re changing, physically and emotionally.

The stories focus on the beginning of the lifecycle—birth—but death is also very present. One of the women is losing her dear aunt, her role model, to cancer, just as she’s about to become a mother. Women whose mothers have died get together on Mother’s Day. An older woman meeting her granddaughter for the first time feels the loss of her husband, who will never get to see his grandchild. And a four-month-old dies in his crib. For me, one of the most poignant things about welcoming a new baby is reflecting on the scope of it all—how expansive and limited one life is. When I first became a mother eight years ago, I really struggled to adjust to the all-encompassing role of caring for an infant, to the day-to-day exhaustion and tedium. But when I thought about what it would mean to watch this tiny being become her own person, year after year–well, I still get teary.

Heather Havrilesky Asks "What If This  Were Enough?" In Her First Essay Collection

Margot Kahn is co-editor of the New York Times Book Review Editors’ Choice collection This Is the Place: Women Writing About Home. Her essays and reviews have appeared in Lenny Letter, The Rumpus, Tablet, Publishers Weekly and elsewhere. Learn more at www.margotkahn.com.