“Goddess Mode” Is A Cyberbunk Comic Full Of Tech, Magic, And Girl Power 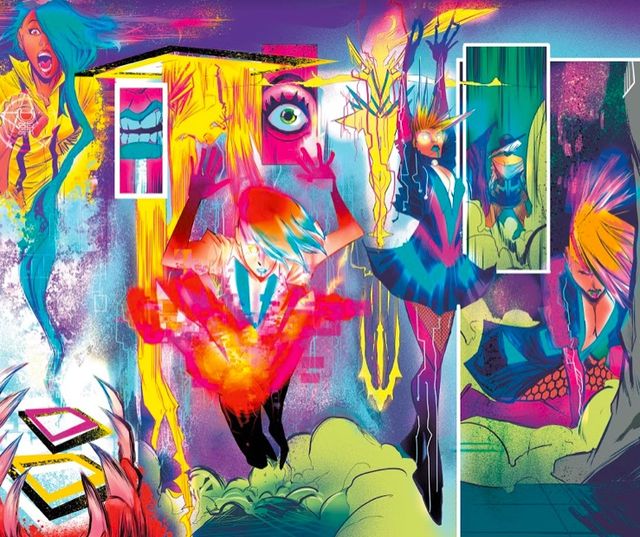 The cyberpunk genre has given us some of our greatest pop culture feminist icons: Furiosa in Mad Max, Major Motoko Kusanagi in Ghost in the Shell. Now, comic writer, author and game developer Zoë Quinn has given us four other badass women navigating a fucked-up future.

Set in a world where technology makes air breathable and water drinkable, Goddess Mode centers on Cassandra Price, a brilliant woman with some serious hacker skills who makes a living as a system administrator to a corporation called Hermeticorp. In this world, most diseases have been eradicated; AI technology has evolved into almost god-level proportions, yet severe income inequality and poverty still exists. There is, however, one very terrible disease that remains called Tucker Bradley Syndrome. It leaves its victims comatose, brain-damaged, and completely reliant on technology to live. Among these victims? Cassandra’s father, also a brilliant tech scientist for the corporation.

In order to see her father, Cassandra steals his credentials and hacks into Hermicorp’s medical facility. While illegally telepresenting herself in her father’s room, Cassandra witnesses a system fail which severely endangers her father and tries to fix it herself, notifying the higher-ups that someone has hacked their system. After her foray in the medical facility, Cassandra is summoned by the CEO of Hermicorp and, to her surprise, is promoted/blackmailed to do a job looking into an unprecedented system failure that has spread across Hermicorp’s network. It’s then that she is sucked into Azoth, the world (operating system) that controls Hermicorp. After Cassandra is nearly eaten by demons, she’s saved by three badass women with different powers in awesome outfits. This is where the true journey begins.

All in all, Goddess Mode is a comic that has a lot of punch, tech, and magic. 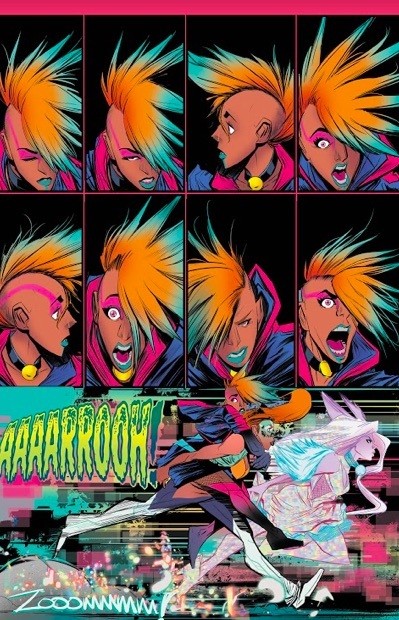 To write the story, Quinn drew from her own experience as a professional System Administrator and game developer. But instead of making the story heavy on tech, she uses magic to explain Cassandra’s time in Azoth.

“I’m trying to sort of blend the whole tech and magic thing—consolidate it and make it more accessible to people. It’s super jargon-heavy, and magic is, too, in this weird way. But the nice thing about magic is I think it’s a little more relatable. It’s a little bit easier to get across, way less dry and, personally, I think it’s a solid metaphor for the power that tech can have in our lives,” Quinn told BUST.

Magic and science have been interlinked and have had close relationship for a long time. Some of history's most noted scientists such as Galileo and Isaac Newton believed in both magic and science. Seeping the tech-focused, cyberpunk world of Goddess Mode in magic makes perfect sense.

Unlike other cyberpunk stories, which are typically dystopian, Quinn wanted to create a story that shows tech in a more nuanced way.

“[My inspiration] was kind of looking at where tech is going and what we’re moving towards. A lot of quantum computing and network institutions and stuff like that can get really magic-sounding when you dig into it,” Quinn told BUST. “Part of it was that, and part of it was examining the way that we interact with tech in our lives.”

Through the use of magic and tech, Cassandra is exposed to a new world and a new side of herself. Quinn explained that this book is not only about a cyberpunk future, magic, and badass women, but it also speaks to our generation. Technology has played a role in connecting the entire world, but some scientists have also talked about negative effects such as disinformation, increased loneliness and isolation, and other effects on our mental health. Quinn, who is also a tech advocate, is telling a story of humanity interacting with tech that can be helpful or harmful.

“It’s trying to take a point of view that doesn’t position humanity and technology as opposites, and more that technology is as neutral in terms of good and bad as humans are. It all comes down to what actually is going on and what [technology] is being used for. I think tech and humanity are not at odds at all because, you know, technology is basically the most human thing there is,” Quinn said. 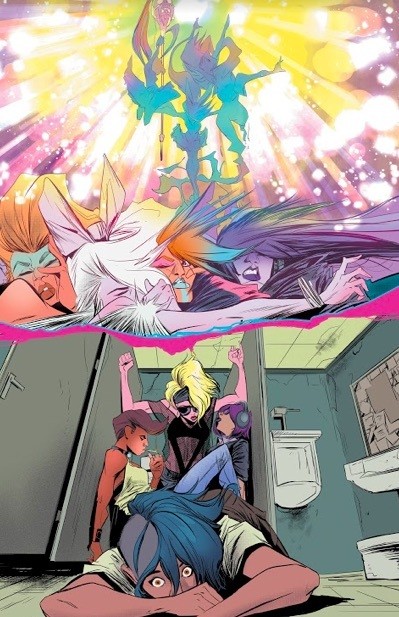 As for the artwork, Quinn met with artist Robbi Rodriguez and colorist Rico Renzi to explain her vision. Quinn, Rodriguez, and Renzi kicked it off right away. According to Quinn, Rodriguez and Renzi understood exactly what she wanted: together, Rodriguez and Renzi captured the gray analogue world and the neon-colored world of Azoth perfectly. The inspiration for the outfits of Cassandra Price, Farrah St. Geremaine, Tatyanna Cole, and Mary Levy, a.k.a. the oracles, is a mix of cyberpunk/Sailor Moon. Honestly, these outfits are the dream of any cosplayer.

Though the protagonists are all female, Quinn said, “I didn’t want to make a story that was necessarily about gender. I just wanted to let the cast be not dudes and have that be fine. And not treat it as weird. It’s more about these overall feelings that are shared by a lot of different people and a lot of different situations, and not focusing on [identity], just using it as a backdrop.

“Fundamentally, the type of story I want to tell [examines] types of power, and that’s one of the big reasons I’m doing all this Internet metaphor, too. Bcause if you’re one person and you’re seeing your place in this gigantic sea of stuff, it’s very difficult to feel like you can do anything meaningful. So that’s kind of the attitude that I’m taking with it. And they just happen to be running in really cool outfits.”

Each oracle has been condemned to a literal world of demons. Each one has the power to interweave between Azoth and the analogue world. They come from different backgrounds and each one has a different life outside of Azoth. But they all have one thing in common: they are oracles charged to solve an evil in a system that can help or hinder humanity. The colors, writing, and the journey of these four women is enough to keep a reader captivated. 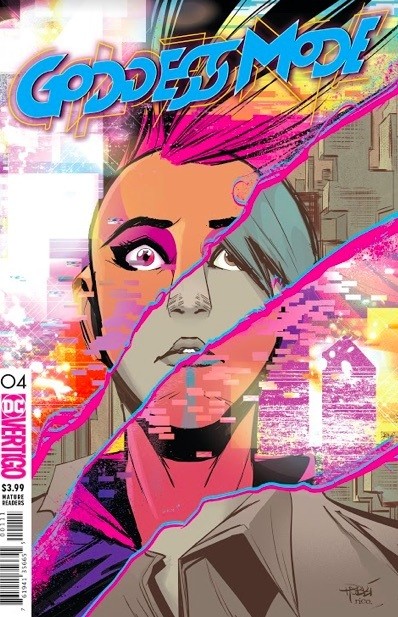 All photos from Goddess Mode

Tags: Goddess Mode , Zoë Quinn , comics , cyberpunk , comics
Support Feminist Media!
During these troubling political times, independent feminist media is more vital than ever. If our bold, uncensored reporting on women’s issues is important to you, please consider making a donation of $5, $25, $50, or whatever you can afford, to protect and sustain BUST.com.
Thanks so much—we can’t spell BUST without U.