The Good, The Bad, And The Importance of SCUM Manifesto 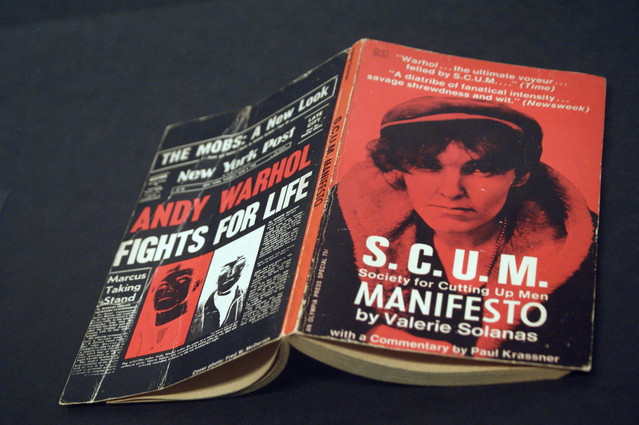 “Life in this society being, at best, an utter bore and no aspect of society being at all relevant to women. There remains to civic-minded, responsible, thrill-seeking females only to overthrow the government, eliminate the money system, institute complete automation, and destroy the male sex.”

I first bought a copy of SCUM Manifesto at Wooden Shoe, the anarchist bookstore in Philadelphia in 2013. I did not know a lot about it but I read the text (as shown above) and felt instantly understood. From one page to the next I found it shocking, relatable, freeing, cringe-worthy, and healing. I have since recommended it to many of my friends but I always preface it by explaining that parts of it are very outdated while other parts are still extremely revelatory. In any case, it is part of the feminist canon and deserves a worthwhile, albeit critical, read.

First of all, who was Valerie Solanas?

Valerie Solanas is most well known as “the woman who shot Andy Warhol.” But as with all underrated women, there is a lot more worth knowing about her than her relationships with, and to, men. In doing research about her, a lot of what I found wrote her off as “crazy” or “insane,” and while there may be truth to her suffering from mental illness, there were reasons behind what she did that are worth examining. All of the following information I gathered from SCUM Manifesto, its introduction, and the film I Shot Andy Warhol which was based on her life (and definitely worth watching for anyone interested in knowing more).

Valerie was known to be a butch lesbian, often wearing baggy masculine clothing, cursing, and smoking. In 1977 when Village Voice wrote that she was not a lesbian, she said, “I consider the part where you said, ‘she’s not a lesbian’ to be seriously libel.” Solanas was college-educated but filled her writing with a lot of crassness which isolated her from academia and made her more in line with artists and proto punks. Solanas was not respected amongst her feminist peers, and was mostly unheard of until she shot, and nearly killed, Andy Warhol in 1968.

A lot of her backstory is tragic and complicated. She lived mostly in solitude until she died broke and alone, having emphysema and pneumonia in a welfare hotel at age 52. Earlier in her life she was abused by both her father and grandfather. As an adult she financially supported herself by having sex for money, and trying to sell her art: SCUM Manifesto. It makes sense that she would have strong negative feelings towards men, which also makes the book a cathartic read for like-minded folks. As she put it, “women who think a certain way are SCUM, men who think a certain way are in the men’s auxiliary of SCUM.”

So, what is the SCUM Manifesto?

The copy that I have includes an introduction by Michelle Tea about her own experience with SCUM Manifesto. She ends her introduction by saying, “And to those of us who ‘who think a certain way’ SCUM Manifesto will always be a fascinating confusing document: a product of a place and time that remains sadly relevant; a piece of political literature, pre-riot grrrl, pre-punk punk, prescient and perturbing and revelatory. For all of its enduring controversy, or perhaps because of it, this work will be with us for the ages, to be wrestled with and fought over and never quite figured out.” Tea is right that SCUM represents a specific time and place. It is cathartic, problematic, brilliant, and ignorant all at the same time.

The largest problem with SCUM is that is in very binary around gender and excludes trans folks. As Michelle Tea writes in the intro, “Valerie’s understanding of gender was limited by her place and time.” The flaws come in her assumptions of gender essentialism in referring to people as the sex they were assigned at birth. These issues are complicated by the fact that Solanas did not conform to femininity in a number of ways so her own definitions of gender stray from the standard binary.

Why should we still read it today?

SCUM Manifesto is a great read if you are looking for a cathartic rant about the shortcomings of cis men, and there are many to be sure. The political climate we are living in is incredibly frustrating for women and gender non-conforming folks. SCUM Manifesto makes it clear that many of these same frustrations have been present and wrestled with for decades. But this work is more than rambling misandry—it was also anti-capitalism at a point where those thoughts were not as widespread as they are today. Her lawyer, Florence Kennedy, who was a radical feminist of the time referred to her as “one of the most important spokeswomen of the feminist movement.”

Michelle Tea speculates in her introduction that one of the reasons the book did not gain as much popularity at the time was because people were not ready for her critiques of capitalism and the links she tied between intersections of patriarchy and capitalism. Michelle Tea wrote, “the manifesto is as much a call for a class war as a gender apocalypse.” She went on to explain that, “indeed, the hysteria at a woman threatening to kill men within a culture where men kill women regularly has been so great as to even now distract from the class rage inherent to the book.” As always we live in a society frought with double standards where only certain people (mostly straight white men) get to have their stories told and recieve empathy, which was even more present during Valerie's lifetime.

How Should It Be Read?

To get a full read of SCUM, it is important to consider not only what was written but who wrote it and why. It is something to read carefully and critically, which is easy to do since it is relatively short. It should be read both as a product of its time and as a product that was written off as “crazy” and therefore did not get enough attention in its time.

It should be read with empathy for Valerie, as her opinions reflect many hardships she faced. She grew her theories out of personal experience which is more than can be said for many academics who over intellectualize things. She speaks from her heart even when it is not always eloquent or proper. Many parts of the book are very witty and funny. At the end of the day, it is a refreshing read for those of us who have, and understand, an innate rage towards cis men.