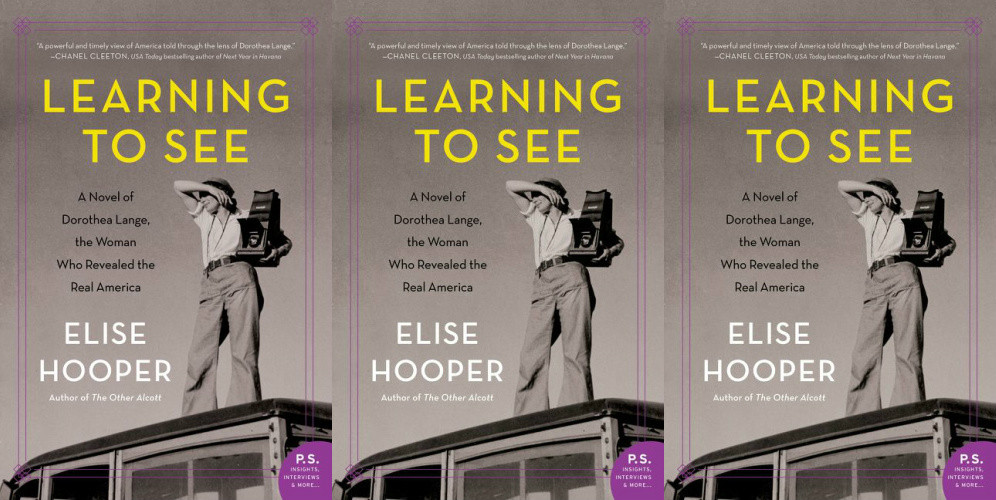 Elise Hooper’s new novel, Learning To See: A Novel of Dorothea Lange, the Woman Who Revealed the Real America, charts two decades in the life of Dorothea Lange, the pioneering documentary photographer who captured iconic images of the Great Depression and the incarceration of Japanese Americans during World War II. After meeting at a writers’ party, Elise and I spoke over the phone from our homes in Seattle. 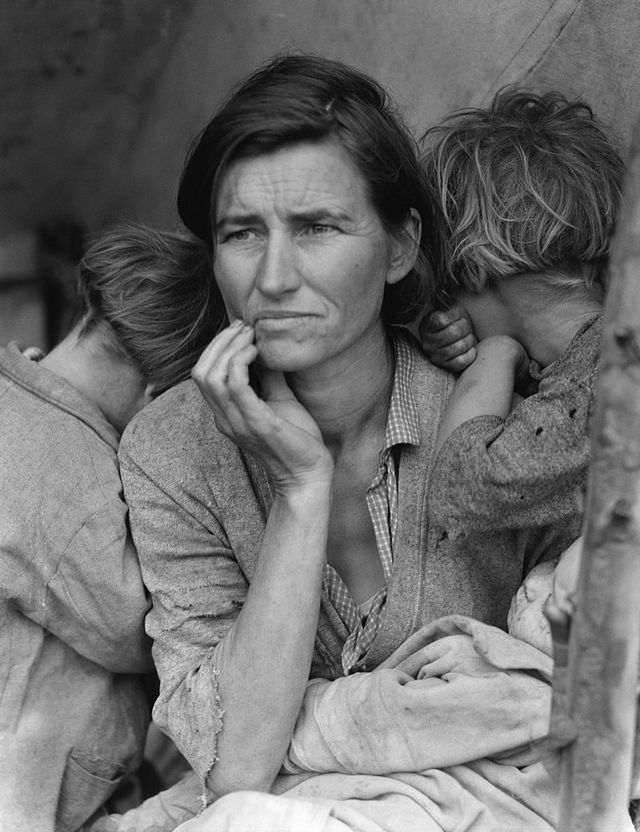 You’ve written a beautiful, layered, page-turner of a book about the American photographer Dorothea Lange. It’s said that all biographers are in love with their subjects. While this is a historical novel, how would you describe your relationship with Dorothea?

I’ve been very obsessed with Dorothea, and I will make no bones about it that I absolutely admire much of what she did. I admire the tenacity and passion she brought to her work. I also think she’s very interesting as a time capsule of the predicament of an ambitious woman in the ‘30s and ‘40s who wanted to have a career outside of the home and all of the challenges that came along with it. I definitely felt empathetic to her plight and the decisions she made.

What drew you to write about her?

Before I started writing this book, I knew that Dorothea had taken those iconic photos of the 1930s, and I knew that she had photographed the Japanese internment. But I became fascinated by the transformation she made from being a successful society portrait photographer in San Francisco to becoming someone with a real eye for social justice. I was intrigued by how she seemed to be willing to look at things that everyone else around her seemed to be willing to ignore, like poverty and injustice. For most of her peers, like Ansel Adams, Ed Weston, and Imogen Cunningham, the human dimension of what was happening in the 1930s and ‘40s did not seem to interest them in the same way; their work remained focused on portraits of well-known people and abstracted images of nature. I was curious as to what made Dorothea different.

In part, when the market crashed in 1929 and some of her paying work dried up, she needed to change with the times. But I think it was Dorothea’s past that made her ripe for the new direction she pursued. Having had polio at the age of 7, she knew what it was like to be a little different, what it was like to be an outsider. And, having her father disappear at the age of 12, she could understand what it was like to experience hard times, what is was like not living the American Dream. I think her experiences drew her to people in similar situations, and it allowed people to be open with her, too, recognizing in her a certain degree of empathy. 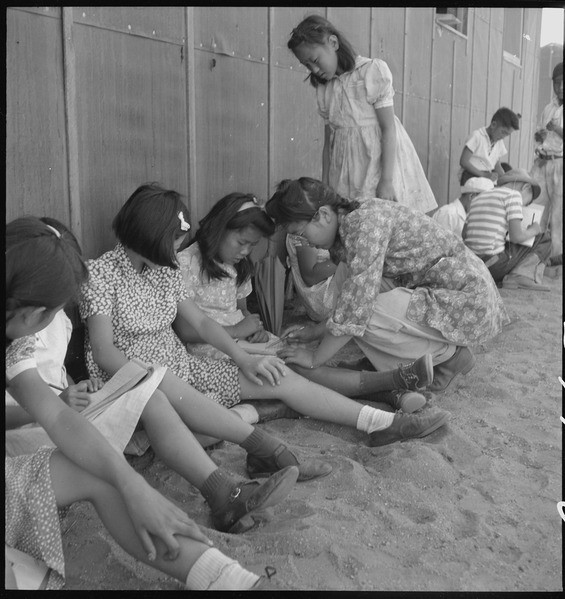 There’s a terrific tension in this book between Dorothea Lange’s role as a mother and her ambition as an artist. You could have easily downplayed the relationship with her children to focus more on her work, as many biographers have done when writing about her famous painter husband, Maynard Dixon. Why did you choose to make this issue, and these relationships, so central to the story?

Honestly, I think they were central to the story, and I think that there’s no way you can separate the Dorothea who was walking the streets of San Francisco and the fields of broader California and beyond from the Dorothea who was wrestling with the affairs of her heart. I could see that she never apologized for the decisions she made, but at the same time, I think she was never at peace with them. I think that’s a fascinating tension for everyone, but especially for women. Even though we feel secure in the fact that we are doing work to support our families and to satisfy our own curiosities, I think we often hold ourselves to a high standard of parenting. I think we carry certain expectations, and we put pressures on ourselves to be good at everything.

You’re speaking of the decision Dorothea made to put her children in the care of a sort of adoptive family during the work week, because at that point she was the breadwinner of the family. Do you think anything has substantially changed for women artists today?

I think that’s a really interesting question. Clearly for many women, for certain social classes, it is much easier to find very safe and positive childcare for our young ones. But childcare is expensive for everyone, and I’ve seen firsthand the struggles of people who are barely making ends meet. When I was teaching high school, I had students who had to miss school regularly to take care of younger brothers and sisters because their parents were working two jobs—a day job and night job. I think we are fooling ourselves to say we’ve come a long, long way. I think that’s a pressing concern for many, many women today.

To me, this book is about ambition, loyalty, and justice. What’s it about to you? 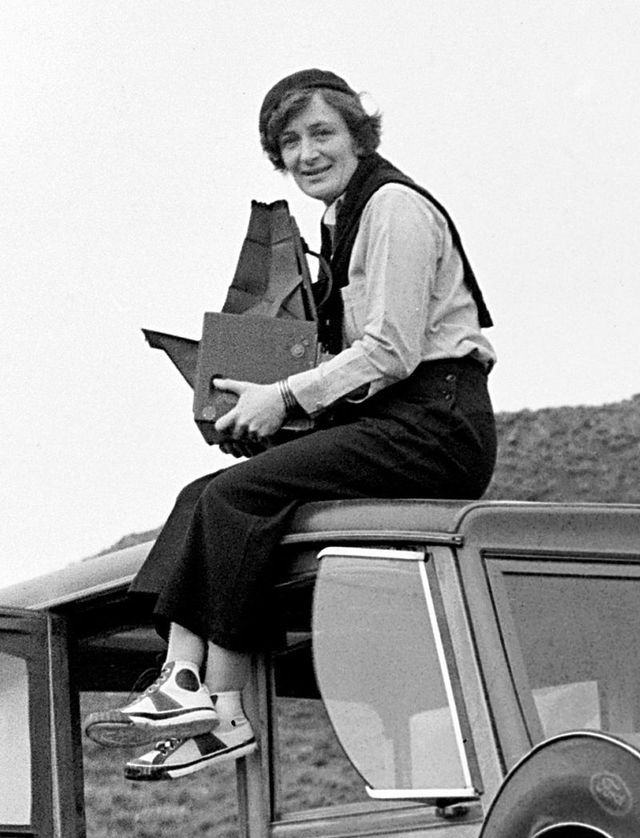 Dorothea had two husbands who influenced her trajectory and transformation, as I think many women of that time did. Georgia O’Keeffe is another example of a female artist whose well-known husband, Alfred Steiglitz, influenced her career. How do you square these inside versus outside forces?

I think some of the negative space of men in Dorothea’s life—her father leaving, and Maynard’s lack of interest in her work—pulled her back from thinking she was an artist and instead she focused on trying to play the role of the supportive wife of a volatile artist, the role of the mother, and the role of the businesswoman supporting her family. It wasn’t until she let go of Maynard that she was really able to embrace so many of the things that interested her.

Dorothea never had a force quite like Steiglitz. Unlike Steiglitz, who was so involved in O’Keefe’s work, Maynard seemingly wasn’t that interested in what Dorothea was doing at all. It was really the pressures he put on her to support them that shaped Dorothea. But I think Dorothea’s second husband, Paul, did open up a whole new world to her. He was her college education, in many ways. He opened her eyes to this whole different kind of work, but then she was really off to the races with it and he followed her lead. He would have seen himself not so much a shaper of her as that she was opening things up for him. They both were very influential for each other.

You did a lot of research for this book. What most influenced you, both historically and creatively?

One source I relied upon heavily was the American Masters documentary about Dorothea, Grab a Hunk of Lightning. I also really liked Linda Gordon’s biography Dorothea Lange: A Life Beyond Limits. I found her biography to ring the most true to me. Dorothea’s photographs were a huge source for me, both to study as part of the historical record, but also to look to for inspiration for scenes and what I needed to include in the story. And then I also read other books set in that time period. I read a lot of Steinbeck and re-read a little paperback copy of Farewell to Manzanar that I read in high school. I was always reading about other photographers, like Ansel Adams and Imogen Cunningham, to try and piece the story together of what life was like for these people.

And once I had written it out and was working with my editor on structure, I wanted a framing structure of looking back, and for that I drew upon Melanie Benjamin’s The Aviator’s Wife to get some ideas. But there are a lot of novels that use that structure. I also really loved Dawn Tripp’s book Georgia, about Georgia O’Keeffe, and I looked at that a few times for how she handled some of Georgia’s past, how much did she dwell on it, how did she deal with it.

What are your current literary obsessions? And what’s next on your to-be-read list?

I am very interested in fairy tale and mythology re-tellings. I like how ancient stories and even the classics can be retold in such fresh ways. I’m loving Katherine Arden’s Winternight trilogy. I’m always really interested in Madeline Miller’s Song of Achilles and Circe. And next on my list is Soniah Kamal’s Unmarriagegable – the re-telling of Jane Austen’s Pride and Prejudice, set in Pakistan. I’m looking forward to reading that!

Get Your Fix Of Stunning Vintage Photography By Women

"Corn Fed" Writer Melanie LaForce On Anxiety, Writing, And Coming Of Age In The Midwest

Margot Kahn is co-editor of the New York Times Book Review Editors’ Choice collection This Is the Place: Women Writing About Home. Her essays and reviews have appeared in Lenny Letter, The Rumpus, Tablet, Publishers Weekly and elsewhere. Learn more at www.margotkahn.com.

Tags: Elise Hooper , Learning To See , Dorothea Lange , interview , books , photography
Support Feminist Media!
During these troubling political times, independent feminist media is more vital than ever. If our bold, uncensored reporting on women’s issues is important to you, please consider making a donation of $5, $25, $50, or whatever you can afford, to protect and sustain BUST.com.
Thanks so much—we can’t spell BUST without U.