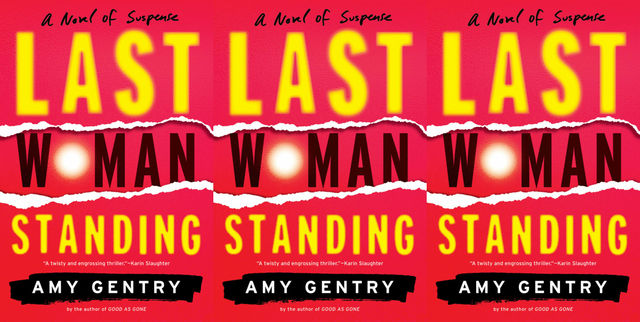 Curious that Last Woman Standing (Houghton Mifflin Harcourt), a speedy, feminist thriller, is being released in January instead of June. If a beach read is a book that wins your attention easily and tends toward women’s interests, this book is a perfect addition to the category, and would sell well if positioned thus. The plot is memorable and easy to track through multiple reading sessions, while the characters twist and turn under author Amy Gentry’s skillful direction. Perhaps the people who calendar book releases considered it too unpleasant, too bloody, to be a beach read. If so, they’ve missed the nature of being a woman in the world.

Gentry, however, has not. Her main character, Dana, struggles thoughtfully against the patriarchal forces massed against her. She is a stand-up comedian, but she is Latina and female, two strikes against such a career. (It’s not for me, a white critic, to say whether Gentry, a white writer, has erred in her choice to narrate through a first-person Latina character, but I found the choise interesting, and never jarring.) Dana is recovering from an assault that was prototypically “not that bad” and a difficult move from Los Angeles, where she hoped to make it big, back to Austin, where she simply hopes to make it through.

After a stand-up performance, seemingly by chance, Dana meets and befriends a woman named Amanda. The pair veer into a Strangers on a Train-like arrangement of swapped revenge against men who have committed terrible deeds. Dana enters this pact nervously, unseriously, and discovers a capacity for violence that appalls her. Amanda has planned her part of the pact much more carefully, and Dana is in deep before she realizes how she’s been manipulated and trapped. The violence escalates, and Amanda’s behavior grows more obsessive and threatening. Dana turns to her old friend, Jason, but Jason has never been particularly sympathetic about gender relations. During one of their conversations, Dana notes, “I could have told him that asking if anything serious has ever happened to a woman—it’s like asking a comic if any of his jokes are funny. By asking the question, you’ve made it clear who’s in charge of the answer.”

The novel ends in a series of revelations—some of which have been telegraphed, but which are no less interesting for that, as observing the effects of plot twists on well-developed characters is worthier than being tricked as a reader. The conclusion is either a victory of justice or a defeat of feminism, or both. As such, it’ll linger in the reader’s mind, and be worthy of discussion.

The book will do that, too. The lines of decent and indecent behavior the characters cross and re-cross, like a cat’s cradle, or the train tracks in the opening to Strangers on a Train, proving difficult to untangle. As Tana French’s The Witch Elm posited in late 2018, possessing a non-cis-male gender identity often means pursuing justice on one’s own, rather than relying on traditional authority structures. Amanda elects to abandon those structures altogether and seek revenge with her unique skills (she is a computer expert), while Dana would rather shove her traumas into a drawer and forget about them. The criminal justice system doesn’t condone revenge, but trauma isn’t as easily forgotten as Dana would wish.

Thus, neither woman is doing it right, and neither is doing it wrong. The novel delves deeply into paradoxes like these. It’s impossible to endorse Amanda’s bloodthirsty vigilantism, but the extremity of certain traumas makes her violence seem appropriate. The app she tries to pursue as a software developer, which aggregates and makes public women’s anecdotal experiences with men they’ve dated, sounds to some like a safety measure, and to others like petty reputation-wrecking. Dana’s inaction allowed a famous comic (so similar to Louis C.K. in behavior that the parallel barely warrants explanation) to exploit other women after her experience with him, but what would have happened if she’d come forward? Nothing, probably. Except her career would have been finished. As Dana asks Amanda, “Truth after truth, and where has it gotten you? Nobody wants to believe the world is what it is.” Gentry highlights and parses the particular experiences of women in the world, and she destabilizes the broad ways in which crime and justice are supposed to work.

All this, and Last Woman Standing is a crackerjack read, too. The highly unusual tension between its external genre (crime novel) and its internal context (stand-up comedy) is part of why it moves so quickly, but the continual pivots and quick-steps of its characters’ changing emotions and priorities keep it speedy, too. It dances through its plot. However, the net result is not joy, but unease.

All this dancing and line-crossing keeps the book interesting, but so, too, does the book’s nudge to thoughtfulness. The reader must consider what she would do in these borderline cases, these situations that don’t suit calling the police or reporting to HR. Would she be sorry if the guy who felt her up with impunity took one too many sleeping pills? Would she resort to a blunt object slammed against the jaw of a vulgar Photoshopper? Last Woman Standing ably asks these questions, but it’s the characters—and the readers—who have to answer them.

Katharine Coldiron's work has appeared in Ms., the Guardian, VIDA, the Rumpus, LARB, and elsewhere. She lives in California and at kcoldiron.com. Follow her at Facebook.com/KatharineColdironMason and on Twitter @ferrifrigrida.