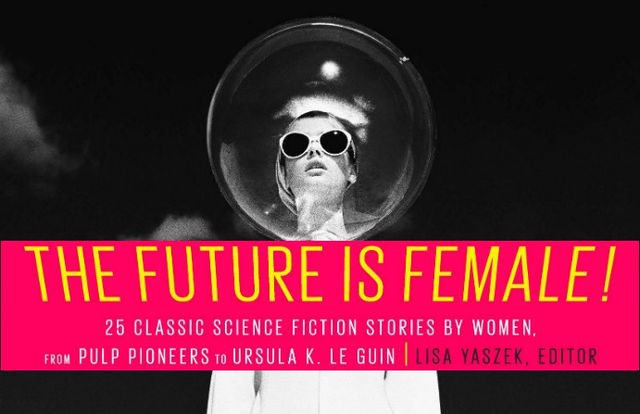 Despite the common trope of men ruling over the rest of the universe just as they do on Earth, science fiction has often afforded women a lot more agency than other genres. Due to sci-fi’s speculative nature, it’s easier to get away with exploring outsider and progressive themes without it causing too much of an uproar with male fans of the genre. Also, since sci-fi is on the fringes itself, its platform lends itself nicely to a feminist take. In a world that is very limiting to women—especially in the times the stories in The Future Is Female! 25 Classic Science Fiction Stories By Women, From Pulp Pioneers To Ursula K. Le Guin were written, between the 1920s and 1960s—sci-fi was the outlet for writers and fans alike. It was way to look beyond the present’s limitations and envision a much greater (or grimmer!) future.

Editor  has compiled an eclectic variety of short stories in her stunning anthology. These stories offer readers a different perspective, often putting women into the roles of sheroes—complex, honest, well-defined female protagonists who couldn’t be present in popular (and male-centric) sci-fi without the aid of women in the writers’ room.

Throughout the anthology, women writers rethink gender roles in a time when that really wasn’t conceived of, as many of these stories predated feminism and the women’s lib movement. Instead of assisting the heroic male figure, the sheroes of these stories save the day instead. In Lesli Perri’s “Space Episode,” the shero saves two cowardly men from dying when an obstruction in a tiny rocket ship means certain death for all—or only for one brave soul. In other stories, gender-bending is explored in revolutionary ways, as in “Another Rib,” in which some of the last remaining men of the human species offer to switch genders to advance mankind. Written by John Jay Wells and Marion Zimmer Bradley back in 1963, this short story broke ground back when the American Psychiatric Society classified homosexuality as "a sociopathic personality distrubance," and the word "transgender" hadn't yet been coined. What makes the story so progressive for its time is that the entire crew is supporting these gender swaps—aside from the team’s captain, who grapples with his bigotry throughout the story.

Mankind’s relationship with other life forms is explored throughout the collection, often as a metaphor for humanity's hostility toward other cultures and races. In these stories, aliens are shown to be more human than human—making the reader question who the real monster is. (Spoiler: it’s us!) Stories like Leslie F. Stone’s “The Conquest of Gola” describe the advantages of collaborating (an approach women tend to prefer) over competing (the typical approach of the alpha male), and offer a peek into what our lives could look like on a daily basis if our culture was peace-loving instead of war-obsessed. I cringed while reading Leigh Brackett’s “All the Colors of the Rainbow,” a story written in 1957. Brackett describes a married alien couple who are brutalized by small-town hicks while passing through on a road trip. As they attempt to stay overnight at a hotel and grab a quick bite, they’re chased out of town and called racist slurs by the townspeople, ultimately scaring the married couple back to their own planet. The story is a painful metaphor for the Jim Crow-era South, and rings truer than ever in current times with Trump’s nationalism terrorizing America.

My favorite stories from the anthology are reminiscent of Black Mirror, a piece of sci-fi that has entered into the mainstream, despite its bleak view on modern life and focus on our parasitic relationship with technology—a point of view usually too real for the masses. While you can’t choose your own adventures in any of these sci-fi stories (Sorry, Bandersnatch fans), the oh-wow-did-they-really-take-it-there level of dark subject matter is definitely present. Kate Wilhelm’s “Baby, You Were Great” is a story about a woman hired for a 24-hour television show where the stakes must always be increased for the viewers to keep getting thrilled and tuning in—and draws parallels with everything from the rise of virtual reality gaming, to the 1998 movie the Truman Show, to the 1987 movie the Running Man, and a few Black Mirror episodes (the fun-loving nature of “San Junipero” spliced with the voyeuristic terror game show world of “White Bear”). Another favorite is Kit Reed’s “The New You,” a precursor to the Stepford Wives—the original movie, not the mega-cheerful Nicole Kidman version—and Black Mirror’s “Be Right Back." "The New You" focuses on a woman down on her looks and marriage who decides to buy an upgraded version of herself, but is unable to get rid of her old self after the transformation is complete. Somehow, the story is hilarious throughout, which was a nice comedic break from some of the darker tales in the anthology.

Yaszek provides lengthy biographies of each contributor at the end of the Future Is Female!, which is cool for so many reasons. As an aspiring fiction writer, it’s motivating to learn how these women got started in writing, and to see how much they achieved throughout their careers. Yaszek's bios also point out how some of the stories featured in the anthology paved the way for huge sci-fi franchises, with Leigh Brackett—aforementioned writer of “All the Colors of the Rainbow—contributing to the first draft of The Empire Strikes Back, shortly before her death. Wilmar H. Shiras, whose contribution “In Hiding” for the anthology details the life of a mutant child, later wrote the Children of the Atom series, which is regarded as a precursor to the X-Men comic book series (and X-Men: Children of the Atom remains my favorite arcade video game of all time). The author bios also offer extensive reading recommendations, so I’ll be using the book’s back matter to find more stories by these women writers.

Despite these authors’ mass appeal, this isn’t your high-school boyfriend’s favorite sci-fi—this stuff’s super-female-friendly and readable. And that’s what makes The Future is Female! so revolutionary—and these women authors so feminist AF.

The Future Is Female!  is out now.

"Meanwhile, Elsewhere" Is A Stunning Collection Of Sci-Fi Short Stories By Trans Writers

Tags: sci-fi , science fiction , The Future Is Female! , The Future Is Female! 25 Classic Science Fiction Stories By Women From Pulp Pioneers To Ursula K. Le Guin , books , book reviews , books
Support Feminist Media!
During these troubling political times, independent feminist media is more vital than ever. If our bold, uncensored reporting on women’s issues is important to you, please consider making a donation of $5, $25, $50, or whatever you can afford, to protect and sustain BUST.com.
Thanks so much—we can’t spell BUST without U.