"My Sister, The Serial Killer" Is A Dark, Funny Novel With A Lot To Say 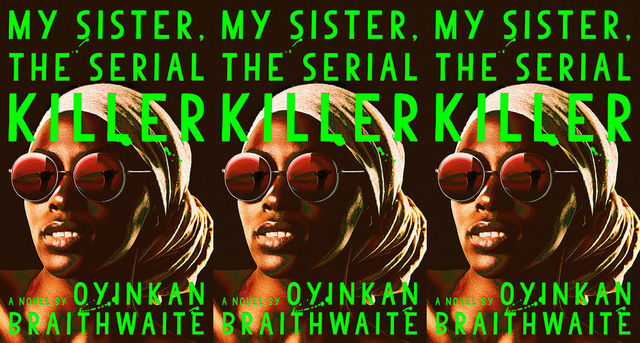 My Sister, the Serial Killer opens with an intriguing two sentences: "Ayoola summons me with these words—Korede, I killed him. I had hoped I would never hear those words again."

Because the dead man—Femi—is the third boyfriend that Ayoola has killed. And each time, Korede—a successful nurse with expert cleaning abilities—has helped Ayoola dispose of the body and cover her tracks. The first time she killed a man, Ayoola claimed self-defense. But then it happened again. And by the time Ayoola kills Femi, Korede is beginning to suspect that there might be something more to the story. Korede googles it: Three murders makes a serial killer. And that means Ayoola is a serial killer.

Oyinkan Braithwaite's debut novel, set in Lagos, Nigeria, is a darkly funny story about two sisters, the bonds between them, and, yes, murder—lots of it. On the surface, the characters feel familiar: Korede, the older sister, is plain, brilliant, successful, and perpetually single. Ayoola, the younger sister, is beautiful, charismatic, and has rich boyfriends lined up to pay for everything she wants.

As Korede struggles with what to do about Ayoola's serial killing habit (especially after Ayoola begins dating Korede's crush and boss, the handsome doctor Tade) and Ayoola's body count grows higher, Braithwaite slowly reveals the sisters' backstory. In bits and pieces, we grow to understand just why they're so close—and why Korede helps Ayoola cover up the murders. We learn about what's hiding behind Ayoola's beauty and Korede's practicality—these are no stock characters, after all. Braithwaite pairs the post-murder scenes with descriptions of everyday violence against women, from the police who harass Korede on her way to work to the sisters' late father's abuse, showing a subtle, feminist theme beneath the over-the-top plot. My Sister, The Serial Killer is a novel with substance, and it's also one that you won't be able to put down.

Tags: My Sister , The Serial Killer , My Sister The Serial Killer , books , book review , Oyinkan Braithwaite
Support Feminist Media!
During these troubling political times, independent feminist media is more vital than ever. If our bold, uncensored reporting on women’s issues is important to you, please consider making a donation of $5, $25, $50, or whatever you can afford, to protect and sustain BUST.com.
Thanks so much—we can’t spell BUST without U.