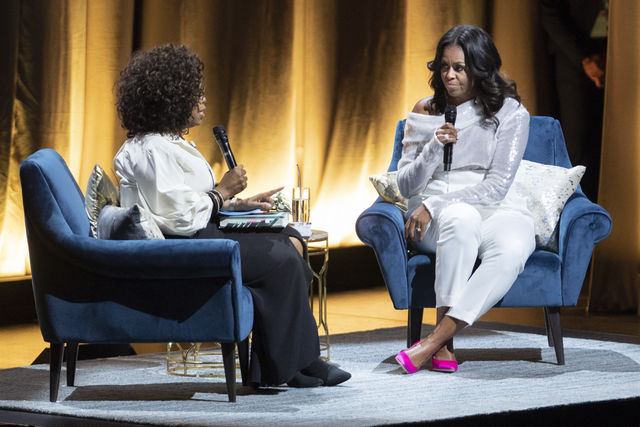 Michelle Obama is an inspiration to countless women, including this writer. When I found out I had been approved to cover the kick-off to her Becoming book tour in her and my home city of Chicago, I was thrilled. The night was one of candid conversation and deep reflection.

We all know Michelle Obama as the former First Lady, as a former lawyer, and as a graduate of Harvard Law School and Princeton. We know about her life in the White House and the microscope she lived under for eight years. In her new memoir Becoming, and at the kick-off event at Chicago’s United Center, we were all invited to get to know Michelle Robinson Obama, the woman, and learn about the journey that turned her into the person she is today.

The night began with buzz and excitement. People were taking pictures of Obama's million-watt smile beaming at you from posters, lights, and photobooths. As the seats were filled, the audience watched videos of Obama's time at the White House, showing her doing pushups with Ellen DeGeneres, "mom dancing" with Jimmy Fallon, and eating breakfast with Grover on Sesame Street.

By 8:45 p.m., the voice of another icon was heard. It was the moderator for the night: Oprah Winfrey. The last time Winfrey was at the United Center was for the final taping her show, The Oprah Winfrey Show, which filmed in Chicago for 25 seasons until its finale seven years ago. As Winfrey stepped on stage, her radiance filled the 23,500-seat stadium. She reminded us, “We are all here because we were inspired by the story of one woman.”

As the video rolled, we heard Obama's voice, giving her last speech as First Lady: “Be focused, have faith, be determined and be hopeful." And as the music swelled, the audience couldn't help but get emotional. We are indeed living in strange and uncertain times. But this night was about the story of one woman. Right before Obama stepped on stage, we watched a video showing her saying, “In sharing my story, I hope to create a space for others to seen and heard.” 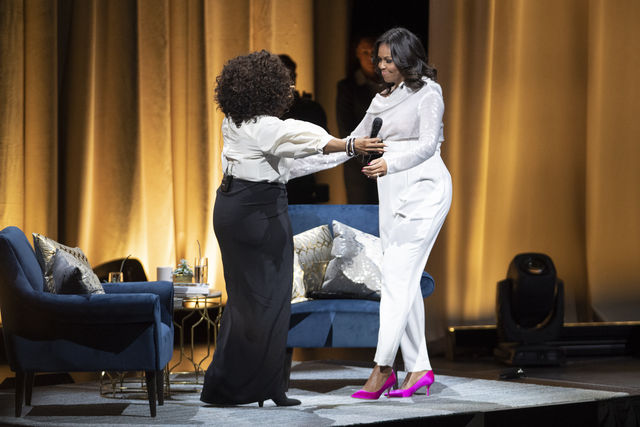 Without much ado, one idol introduced the other. Obama stepped on stage, gave Winfrey a hug, and both women sat down. Although the United Center, like the many other centers Obama will be at during her book tour, is huge, her presence filled the room. Instead of holding a giant concert, the room held a conversation between two women that was intimate, candid, and real. And Obama did not hold back, in the same way she does not hold back in her book.

Winfrey began by asking Obama about her time as the First Lady. She got to the heart of one of the questions we are all dying to know: how she felt during inauguration day, and what she thought abut the memefied picture. Obama candidly explained the stress that happens when a new president is sworn in. On the same day that the president is sworn in, the former president must move out of the White House. The night prior to inauguration day, Sasha and Malia’s friends had slept over. So that morning, Michelle Obama was trying to get weeping girls out of the house and prepare everything for the inauguration. She explained, “The parade is kind of like to give us more time to move.”

On a more serious note, Obama explained what it was like to sit on the stage during that particular inauguration. “The optics on the stage are very different when you are sitting on the stage. When we were up there, there was a sea of diversity in the crowd,” she said. But during the Trump inauguration, the crowd was predominantly white, and as Obama said, “there were Satanists”—members of the Satanic Temple protesting Trump's election. As she listened to Trump's inauguration speech, she realized, “Things were going to be really different.”

The stress of moving out of the White House was incredibly hard, Obama recalled. In another funny moment, she confessed that she jokingly told Winfrey in private that when she would get on the helicopter to leave, she was going to lean out the window and say, “Bye Felicia!" But in the end, she didn’t. “I didn’t do it,” she said, laughing. “No, when I got on the plane, I think I sobbed for 30 minutes. I think it was just the release of eight years trying to do everything perfectly. I said to Barack, 'That was so hard.' I wanted to say that for eight years.”

Obama explained that the First Family experiences a type of stress very few know. We can read about the world’s problems in the newspapers or even report on them, but the president has to solve them. The world looks to the United States as world leaders. And that's why Obama waited to tell her personal story until now, because as the First Lady, it was important to keep the nation’s needs in mind before her own. 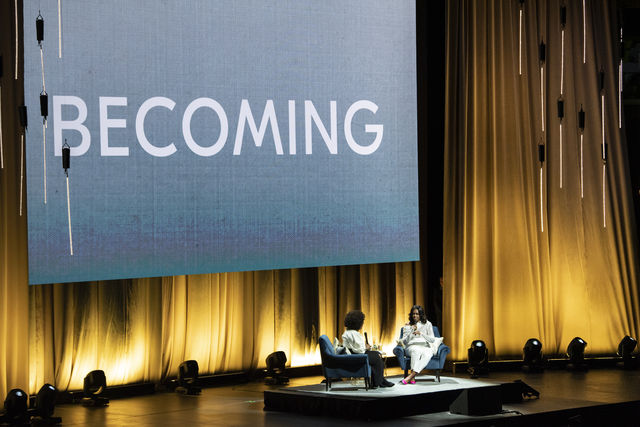 Now that she is sharing her story, she is encouraging all of us to become who we are and want to be. A large part of Obama's evolution was her role as a woman—not just as the First Lady. Before Barack Obama was even a glimmer in her mind, she was a focused, straight-A student. She was, as she said, a box-checker, and still is. She got into Princeton—although her high school counselor dissuaded her from applying—went to Harvard Law school, worked for a major law firm, and then realized that she hated what she was doing. Coming from a poor background, she felt finding her “bliss” was a luxury she wasn’t really afforded.

“I never stopped to think, 'who am I?'” Obama said. “There are kids who have the financial backing to explore their passion. All I thought was, 'Well, you don’t have debt.' I had to struggle with how do you do it.” Her story and message resonated with the audience, which responded with applause, mmhmm-s, and tears. She is not a self-help guru or the next Tony Robbins, but by sharing her story, struggles, and experience, she opens the door for the audiences and readers to be vulnerable.

There were many highlights of the night, but one of the biggest takeaways was Obama's reflections on our places as women. “People are still confused of the job of the First Lady, because we are still confused about who women should be," she said. She went on to talk about the importance of women working on ourselves and shared that, for a while, she struggled to figure out who she was. She was an overachiever, but didn’t feel like she had lived.

Later in the night, Winfrey asked Obama, “Why do you think there are so many women who lose themselves?” To which Obama responded, “I’m still trying to figure that out. I still think we have a limited view of what women can be. We are still grappling with that.” Obama stressed the importance of listening to women's stories—both hers and our own. Our stories mold us; they are our thread.

At the end of the night, Obama left us with this thought: Our stories matter, they are valid, and it is necessary for us to move forward. No matter what our background or race is; no matter if we are poor or immigrants. And, importantly, it’s really hard to hate up close. If we know each other’s stories, we can understand each other, and continue to grow and become who we should be.