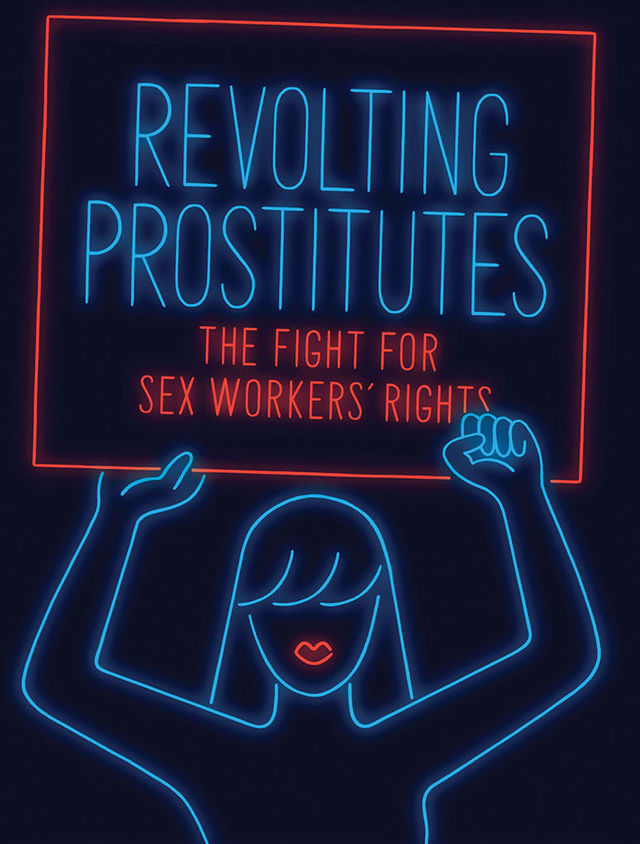 Revolting Prostitutes: The Fight for Sex Workers' Rights, recently released by Verso Books, is everything I hoped it would be. This is an important read for anyone interested in feminism, labor rights, racial equality, and immigration. The book is not focused on whether or not sex work is legitimate work (it is), but rather the “assault, exploitation, arrest, incarceration, eviction, and deportation” that often comes with it.

The authors, Juno Mac and Molly Smith, are both sex workers and activists. Mac works with Sex Worker Advocacy and Resistance Movement (SWARM)—a sex worker-led collective based in the UK. Smith is also a part of SWARM, in addition to being involved with the Scottish Prostitutes Education Project (SCOT-PEP), a sex-worker led charity based in Edinburgh, which is working to decriminalize sex work in Scotland. You can read her articles about sex work policy in The Guardian and The New Republic.

It's clear from the very beginning of the book that Mac and Smith's “concern is for the safety and survival of people who sell sex.” The book goes into detail about the relationship between the contemporary left and the sex workers' rights movement. The first sections of the book, "Sex," "Work," and "Borders," give an overview of the sex workers' rights movement, while further chapters go into greater detail about policy in various locations, with chapters called "A Victorian Hangover: Great Britain," "Prison Nation: The United States, South Africa," "Kenya, The People’s Home: Sweden, Norway, Ireland, and Nevada," and "No Silver Bullet: Aeotearoa (New Zealand) and New South Wales."

Revolting Prostitutes begins with an introduction contextualizing the issues at hand. The authors explain, “Attitudes towards prostitution have always been strongly tied to questions of race, borders, migration, and national identity in ways which are sometimes overt but often hidden. Sex work is the vault in which society stores some of its keenest fears and anxieties.” This is telling of the ways society pushes sex work under the rug, because to confront sex work is to confront the larger systemic problems within society.

The authors assert that sex workers are the original feminists. In 19th century Great Britain, sex workers created communities of mutual aid including sharing income and childcare. In the United States in 1917, 200 sex workers participated in a protest which has been referred to as “the original Women’s March” in San Francisco. In 1974, Ethiopian sex workers joined the Confederation of Ethiopian Labor Unions and engaged in strike action that ultimately helped to bring down the government.

Mac and Smith then go into contemporary sex work activism. “Recent years have seen a significant shift in the sex worker movement away from protective ‘Happy Hooker’ myths, towards a Marxist-feminist, labor-centered analysis," they write. Contemporary sex work activism focuses on the intersections of poverty and patriarchy in order to see sex work as a symptom of oppression, rather than the cause. “After all—as any woman knows—it is a struggle to be heard if your detractors can easily dismiss you as ‘sluts,'" Mac and Smith write.

In the intro, Mac and Smith also explain the concept of “carceral feminists.” This term refers to feminists who look to the legal system to solve problems; this will never work since many sex workers feel a lot more endangered by police than they do by their clients. Mac and Smith explore the history of how the police force was designed to inflict “non-lethal” violence in order to protect the interests of capitalism as the working class started to organize, protest, and riot, both in the US and the UK.

Sex workers, and women in general, have good reason to distrust and fear cops. After excessive use of force, sexual assault is the second most reported form of police violence. On-duty police commit sexual assault at more than double the rate of the general US population. It is also very common for police to threaten to arrest and deport migrant sex workers, even when the worker has come to them as the victim of violence.

The first section of the book examines the "sex" part of sex work. The authors empathy with sexual assault survivors is clear and they emphasize their understanding of the hesitancy that can be tied to sex for many women. “Sex can be as much a site of trauma—or uneasy compromise—as a site of joy or intimacy," they write. They break down the sex-positive and sex-negative binary among feminists and “assert the right for all women to be ‘sex-ambivalent.’”

In anti-sex work discussions among feminists, sex is often spoken of as something that is too special or precious to be sold, which perpetuates puritanical views of sex and virginity. Younger feminists are developing more open-minded views of sex work, which the authors connect to “hook-up culture” and the disconnect of emotions and sex. Technology and blogging have also made it easier for women to talk more openly about sexual pleasure, which has brought “a new sexual revolution built by millennials.” However, the authors also acknolwedge that the pro-sex and pro-pleasure conversations may not be nuanced enough, and that there can be further complications for sex workers.

Regardless, criminalizing sex work absolutely does not work as a means to end sex work, to make sex work safer, or to give people more options. Sex work is often delegitimized by people who make “tragedy porn,” such as documentaries that only feature soul-crushing stories in which the worker has no agency. Another danger to sex work is rape denialism, or the idea that sex workers can't be raped—which the authors say is “unconscionable and completely contrary to feminism.” At an Amnesty International meeting in 2017, a sex worker named Nikita said, “Part of believing me when I say I have been raped is believing me when I said I haven’t been.”

The next section delves into the "work" part of sex work. “Most workers suffer from unfair conditions in the workplace and would not, as a rule, do their jobs for free.” Society has a violent history of erasing the emotional labor that is attached to a lot of women’s work, including reproductive labor as well as sex work. This view reduces sex work to being available as a sex object, rather than considering the realities of providing sexual labor as work. It also assumes that you can purchase consent, which then leads to the rape denialism that was mentioned in the previous section.

The book compares this assertion with the notion of someone purchasing a massage and then thinking they can do whatever they want to the worker, which would be obviously wrong. That this claim is made about sex workers “shows how deep the belief goes that women who sell sex give up all bodily boundaries: it is a belief shared—and mutually enforced—by those who assault us and those who imagine themselves out defenders.”

Sex workers fear being honest about poor workplace conditions, because it can give opponents of sex work ammunition to use against them, rather than the intended reason of hoping people will help with their activism. But in a criminalized market, there can be no regulations and no workers’ rights. When sex work is decriminalized, it allows for specific regulations that can help with safety and right for workers.

Opponents to sex work also tend to victim-blame and assume that sex workers could easily find other work to support their livelihood. The authors assert, “The high prevalence of marginalized people in prostitution is seen as evidence for its predatory strangeness, but in reality, it reflects the normalized, systemic failure of mainstream society.” We can therefore locate the problem to be with the construct of work and capital, rather than the existence of sex work: “To be better than poverty or a lower paid job is an abysmally low bar.”

This section goes into greater detail about the problems with capitalism and how it creates a dangerous environment for women, and sex workers in particular. They also explain how sex work activists structure their need and demands: “When sex workers assert that sex work is work, we are saying that we need rights. We are not saying that work is good or fun, or even harmless, nor that is has fundamental value.”

The next section of the book talks about borders and migration in relation to sex work and human trafficking. Many opponents to sex work conflate sex work with trafficking as a means to criminalize all sex trade. The main, and extremely important, difference between sex work and trafficking is consent. Though it can be argued that under capitalism, consent cannot freely be given when there are no other economic options, the same can be said for all jobs, and therefore should not be held against sex workers.

The truth of the matter is that “the vast, vast majority of people who end up in exploitative situations were seeking to migrate and have become entrapped in a horrifically exploitative system because when people migrate without papers, they have few-to-no options.” The authors “take a firm stance that no human being is illegal.” Borders make people who need to cross them vulnerable, and abusers prey on vulnerable people.

The book quotes migrant rights activist Harsha Walia, who said, “While history is marked by the hybridity of human societies and the desire for movement, the reality of most of migration today reveals the unequal relations between rich and poor, between North and South, between whiteness and its others.” The rise in criminalization of immigration leads directly to higher rates of trafficking as it leaves people without other options.

Revolting Prostitutes explores different models of sex work policy that are used in various regions of the world. I am going to leave that to the reader and jump to the book’s conclusion. On the first page of the conclusion, the authors write, “We aren’t asking that you love the sex industry. We certainly don’t. We are asking that your disgust with the sex industry and with the men doesn’t overtake your ability to empathize with people who sell sex.”

Sexual politics, worker's rights, and immigration are all issues that sex work activism focuses on. However, those movements also need to center sex work activism. As the authors write, “The most potent source of untapped power for sex workers is not sexual liberation, social rebellion, or even money, but solidarity.”

Revolting Prostitues is an essential read for anyone interested in feminism, activism, and other social justice movements. Sex work should be centered in activist movements, since it intersects with so many systems of oppression. I will end my review with the powerful words that end the book: “We want a future where feminist revolt and resistance is uplifted by the brazen spirit of the prostitute who demands to be safe, to be paid, and to be heard. In the words of Black Women for Wages for Housework: When prostitutes win, all women win.”

Tags: sex work , immigration , labor rights , feminism , activism
Support Feminist Media! During these troubling political times, independent feminist media is more vital than ever. If our bold, uncensored reporting on women’s issues is important to you, please consider making a donation of $5, $25, $50, or whatever you can afford, to protect and sustain BUST.com. Thanks so much—we can’t spell BUST without U.