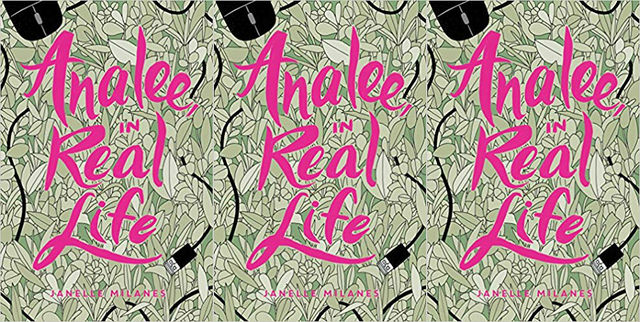 Fall is here, and love is in the air. Or, rather, fake dating is in the air. Where first To All the Boys I’ve Loved Before captured the internet’s hearts with a damn cute high-school fake dating story, followed by Sierra Burgess Is A Loser’s re-imagining of Cyrano de Bergerac with a side of catfishing, now Analee, In Real Life, the latest novel by Janelle Milanes, has arrived to give you all the dramatic irony via high-school fake dating you crave. Will those two kids fall in love, despite only professing to be dating for appearances and reasons of convenience? Why even ask the question?

Analee Echevarria would rather play her online RPG than go on a date. In the world of the game, she’s not a daughter who’s still grieving her mother; she’s not a shy teenager whose recently-widowed father is marrying a perfect blond social-media yoga star named Harlow; and she’s certainly not a loner whose best friend, Lily, abandoned her to date a popular boy. Instead, she’s a confident, powerful warrior who just happens to be in love with Harris, her fellow gamer, even though they haven’t met. In the way that such events transpire in a juicy YA novel, Analee ends up pretending to date Seb, the king of her school’s popular crowd and a dashing soccer player to boot. Naturally, their plan to fake date without emotions getting in the way doesn’t go quite as planned, especially when her online crush Harris decides to get into the picture IRL.

As I finished Analee, In Real Life, the first question that came to mind was the following: How does an author write a high school romance in the year 2018, when so many precedents in the genre are unfortunately rather dated? (See: Sixteen Candles, The Breakfast Club, Pretty in Pink, Back to the Future, Weird Science, Molly Ringwald’s essay for the New Yorker on being John Hughes’ muse.) How does an author show a high school relationship that is both realistic and also somewhat aspirational—to be true to what the high schoolers of today are experiencing, but also showing them a positive example of what a mutually respectful relationship looks like?

It’s actually the first question I ask Milanes during our interview. She replies, “It takes a lot of almost reprogramming yourself to understand what’s not okay. What you’ve thought of or what our society has told us and drilled into us, like ‘this is completely normal,’ and we’ve had to teach ourselves now that ‘no, it’s actually very harmful.’ As writers […] especially when you’re writing YA, you have a responsibly to somewhat portray healthy dynamics especially when you have a love interest in a book and you know teenagers are going to be reading it and possibly idealizing certain characters. So you want to make them flawed, but you also want to be careful of what you’re projecting as a healthy relationship. And if you’re writing about a relationship that’s more toxic, to make it clear in the text why the relationship is toxic and what about that character could be harmful to a young woman.”

I press further: in Analee, In Real Life, there are some scenes where, despite only ostensibly fake-dating, Analee and Sea do begin to get a little physical in their relationship. Were there any instances in the book where Milanes began to write out an interaction or conversation between the two, and then backtrack because she realized she was unconsciously replicating the problematic dynamics of these earlier tracts on high-school love? She remarks that “the book shows it’s a tricky situation where feelings are getting involved because their relationship isn’t real, but it does definitely evolve into something. So the issue of consent does become very important, and [Seb] never does anything with Analee that she’s not explicitly comfortable with. There are scenes of Analee and Seb where they’re starting to get physical, and Seb is checking in with her. And when she’s breaking down a little bit, he doesn’t continue doing anything with her.”

Having the love interest be a typical jock (but with a heart of gold) also provided Milanes an opportunity to give a well-worn stereotype some much-needed nuance. “Seb starts out as a little of a stereotypical jock, and when you first start reading the book that’s what you imagine him to be, so I didn’t want to fall into any harmful stereotypes of portraying his character that way. I wanted to flesh him out a bit. He has some depth to him, and he has a respect for women, and it’s not just him taking advantage of Analee in the situation they’re in […] you can see he cares about her and is treating her with the respect she deserves.”

As far as making the high school romance ring true to high schoolers, Milanes had plenty of opportunities to study her own high school students (she has previously worked as a teacher). She admits to admiring the verbal dexterity and virtuoso pop culture referencing of the characters on Gilmore Girls, noting, “it’s almost like you want it to be grounded in reality, but also want it also to be aspirational in some way […] I think when you’re writing YA, you’re writing an idealized version, in a way, of what YA readers would want their relationships to look like or sound like. And it’s a fine line because you don’t want it to be completely unrealistic, but at the same time you want to elevate the dialogue you hear.”

So Milanes had the inside track on how high schoolers think and relate to one another when writing this book. I have to ask, then: Why is this high-school fake-dating subgenre becoming so popular? I tend to associate fake-dating tropes with fanfiction or stories with adult characters (see The Man from UNCLE, 2015). Are high schoolers actually pretending to date one another and then somehow falling in love? Or are these stories a result of people writing for older readers as a form of wish fulfillment? Milanes replies, “I think readers like to think that they’re in the know before the characters in the book are, and you know where it’s going. You know that when a couple begins to fake date, they’re obviously going to fall for each other. […] You take pleasure in knowing how it’s going to pan out. You want to watch these characters learn it on their own, and that’s part of the fun.” But is there an epidemic of adolescents finding love in the hopeless halls of high school while pretending to be together? Milanes cites her own sister as one of several cases she knows of personally where this very scenario occurred: “[She] is actually married to her high school sweetheart—they were good friends and started fake dating. I think there were some people interested in them that they did not have those same feelings for, and they were fake dating to throw those other people off, and came to realize that they did have feelings for each other. I don’t know that that’s common, but it does happen in real life.”

They say you should write what you know; when it came to developing her grouchily lovable protagonist Analee Echevarria, Milanes drew from her own experiences and research. Analee’s love of RPGs is derived from Milanes’ own World of Warcraft phase, where Milanes admits, “I would play, and I realized that once I started playing after work, before I knew it, I hadn’t eaten and it was three in the morning. And I realized, ‘oh, I need to stop doing this. I have an obsessive personality, and it’s not going be good for me.’”

Similarly, much of Analee’s emotional turmoil in Analee, In Real Life is derived from the lingering sense of loss she feels after the death of her mother. While Milanes hasn’t experienced the death of a parent, she has dealt with the passing of other family members. When it came to understanding how best to write Analee, she “spent a lot of time “talking and listening to people who have dealt with intense grief and loss.” And the loss of Analee’s mother places a heavy burden, both narratively as well as in the story, on the shoulders of her father, Rafael, whose upcoming marriage to what Milanes describes as a Gwyneth Paltrow-type fitness and lifestyle guru creates another rift in the father-daughter relationship. Milanes notes, “Analee and her dad are very similar in the way they deal with grief. Instead of leaning on one another for support after Analee’s mom passes, they both try to cope by withdrawing and shut down. I wanted to show two sides to Rafael: he is a flawed parent, one who loves Analee deeply but has difficulty reaching out to her when she needs it. He is also an individual who has lost the love of his life and is doing his best to find happiness again. Analee has difficulty understanding his intentions. She can’t see past her own grief to recognize his.”

Analee’s initial “inward focus,” as Milanes puts it, also means that the character of Harlow, the aforementioned social media yoga star, undergoes a shift before our (and Analee’s) eyes. There’s a particularly sharp scene where Analee calls out Harlow for appropriating a dish Analee’s mother used to make—Harlow, being a fitness guru, takes the name, but changes everything about it to make it healthy. But where a conversation about cultural appropriation could have risked coming off as preachy, Milanes handles it with grace and humor, and the discussion plays out like a conversation people would actually have with one another. Milanes says of Harlow, “As I kept going, I was empathizing with her a little bit, because a lot of her missteps were coming from a place of ignorance, as opposed to bad intentions. I wanted to explore her vulnerabilities a little more in the book, and trying to see it from her perspective because I didn’t want to write her as the evil stepmother. I started thinking from her perspective—how difficult it could feel for this white woman who’s entering this culture she doesn’t understand.”

Since Netflix is reviving the young adult romantic comedy genre almost singlehandedly, I have to ask the question I’m sure all authors are tired of being asked: If Netflix were to come calling, are there any actors Milanes has pictured for her characters? Aside from Gwyneth Paltrow as Harlow, Milanes says, “I pictured Gina Rodriguez a lot, like a high school version of Gina Rodriguez. Gina Rodriguez is very outgoing, and that’s who Analee is on the inside once you get to know her, so I definitely saw that. For Seb, I had this vague hot guy in my head, not any particular. I did look up Spanish soccer players […] Seb is basically as a hodgepodge of hot Spanish soccer players in my head.”