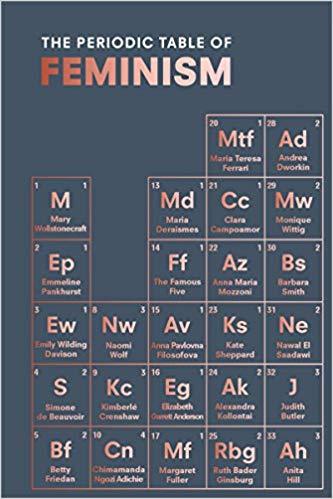 The Periodic Table of Feminism, written by Marisa Bate, features one-page bios of a variety of women, movements, and organizations. The majority of the book focuses on authors, activists, politicians, musicians, actresses, poets, artists, and other individuals, including Sojourner Truth, bell hooks, Ruth Bader Ginsburg, Frida Kahlo, and Roxane Gay. Bios are also dedicated to movements including Riot Grrrl, organizaitons including Bitch Media, and activist groups including Femen. Some of the bios are accompanied by illustrations of subjects, along with powerful quotes (One of my favorites is from Nellie McClung of the Famous Five—a group of Canadian feminists who won women the right to be appointed to the Senate—who said, “Never explain, never retreat, never apologize. Just get the thing done and let them howl.”). The book and table are divided into feminism’s four waves, and organizes key contributors within each wave according to who the author considers like minds. Since the book clocks in at just under 200 pages, is small in form (it’s about a 5x7” with tiny font and plenty of white space, making it more about form than function), and contains lots of illustrations, it’s not a comprehensive read on the topic. Bate makes no promises to provide an exhaustive delve into feminism’s herstory, and states that the book instead is meant to detail some of the most influential women of each wave.

When reading the book solely for learning about who the major players were from each wave and learning what seminal work each woman provided for women’s rights and feminism, the book was fairly successful. I learned about a ton of cool feminists from all over the globe and in the US alike who’ve been overshadowed by white feminism. I’ve added so many books to my Amazon wish list already, and I'm definitely checking out Judy Chicago’s installation "The Dinner Party" (a triangular table with 39 place settings for prominent women—both historical and mythical) at the Brooklyn Museum ASAP. That said, it was difficult to see musicians like the Spice Girls and Beyoncé featured in the book, while Madonna is left out—yet she’s mentioned in bios about other women. Surely, Bate felt Madonna was influential enough to use her quotes elsewhere in the book, but failed to include her as an influential feminist in her own right. Among other women undoubtedly neglected here, Madonna’s omission was a glaring one.

As for Bate’s approach to the topic, the book’s premise as a periodic table is gimmicky at best. The only element of The Periodic Table of Feminism that has an actual periodic table is the cover. Since the book is quite small, only a few of the “elements” are featured in chart form on the cover. Also, the only part of the book that’s printed in color is the cover art, so none of the feminist elements throughout the book are categorized by color; rather, they’re all varying shades of gray (which is a little bleak and depressing if you give it too much thought, like I did). The most relevant comparison Bate provides for the use of the periodic table to sort through feminism is because these women are described by the author as “explosive free radicals, conductors and catalysts. They are reactionary, elemental, precious. They come together and create new, incredible things.” While the use of metaphor here does explain Bate’s use of the table a little, it still doesn’t make sense to repurpose the periodic table of elements to express a few analogies connecting feminists and chemicals. Furthermore, it was an odd choice to convey this info largely in text, given the book’s concept is a graphic and wholly visual in nature.

At the very least, the book should have offered either a pull-out poster of the periodic table of feminists, or had a full-color insert in the middle of the book to give readers a bigger picture of how the book comes together. Without a visual aid, it’s hard to tell where the book’s subjects would appear on the table since the visual representation is never adequately provided.

Finally, and most importantly, the apparent lack of fact-checking was my biggest problem with the book. In an entry about Pussy Riot, the women are described as wearing signature bandanas instead of what they actually are known for wearing: colorful balaclavas. Since Pussy Riot’s rise to fame was so recent—and their choice of accessory was so iconic, and crucial to their aesthetic and message—it’s quite the oversight. In addition, elsewhere in the book Bate mistakenly cites Gloria Steinem’s book My Life on the Road” as On the Road. I just can’t forgive such egregious errors—especially since I work as an editor at a book publisher. These overlooked mistakes made me wonder how much of what else I had read, on topics I couldn’t verify myself, was also untrue.

Despite its problems, I still enjoyed reading about the feminists Bate featured in The Periodic Table of Feminism, admired the book’s overall visual appeal, and liked the illustrations of fierce feminists featured throughout. The book would great for younger readers, serving as a feminist starter kit of sorts. It would also make a super-cute coffee table book—I might keep it at my work desk to page through in my downtime and use as a jumping off point to learn more about the women Bate featured.

Most importantly, the book sheds some light on the movement’s forgotten contributors, those overshadowed by key players in white feminism. It’s so important to have texts teaching the work and ambitions of ALL feminists who have helped mold the movement. Furthermore, it’s truly inspiring to read about what women have done throughout the ages to carve out a place in the world for women, particularly in the first wave when doing such work was completely radical. Hopefully, The Periodic Table of Feminism will inspire present-day and future feminists to do more for the movement, and inspire them to find a way to contribute to the cause in a way that works for them. Whether it’s art, writing, politics, or protesting the patriarchy by any means necessary—your activism can align with your interests and strengths in really cool ways—and this book attests to that.