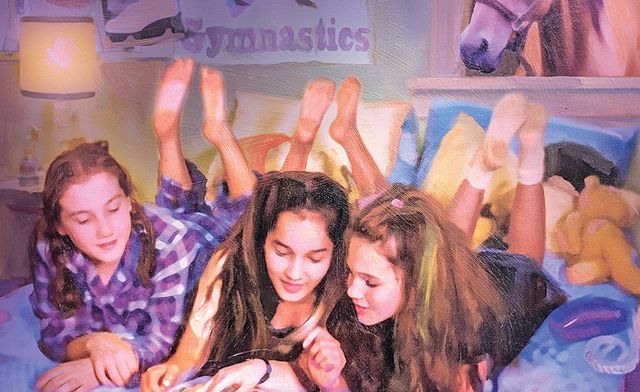 If you were obsessed with the drama of Sweet Valley High long before Gossip Girl premiered; if you dreamed of starting your own business as a preteen thanks to the Baby-Sitters Club; if you kept yourself awake at nights because Goosebumps made you too scared to sleep—in other words, if you were a preteen or teen in the '80s or '90s—you'll want to pick up Paperback Crush: The Totally Radical History Of '80s And '90s Teen Fiction by Gabrielle Moss.

In chapters organized around teen fiction themes—including "Love," "Friends," "Jobs," and "Terror"–Moss examines the teen fiction boom of the '80s and '90s; traces the history of YA from its birth in the 1940s to the present; looks at how '80s and '90s teen series reflected cultural conversations of the time; and investigates what made teen paperbacks so popular.

Moss has a lot of affection for '80s and '90s teen fiction, and it shows—the third paragraph mentions "Claudia Kishi's pumpkin earrings [and] that time Jessica Wakefield accidentally joined a cult while she was at the mall (Because, honestly, who hasn't?)." But Moss also confronts '80s and '90s teen fiction's shortcomings, such as how rare it was to find main characters who were people of color or LGBTQ, or how the '80s trend of "eating disorder novels" reinforced dangerous stereotypes about the illness.

Moss mentions that her peak teen fiction reading years were from 1989 to 1994, and Paperback Crush mostly focuses on that time period, and a little earlier—in the introduction, Moss defines it as "the period after Judy Blume but before J.K. Rowling." My own peak teen fiction reading years came a little later, in the late '90s and early 2000s, and though Paperback Crush includes plenty of books I'm familiar with—the Baby-Sitters' Club, the Saddle Club, the Face on the Milk Carton series, Goosebumps, Judy Blume's and Paul Zindel's books—there are also many series that I learned about for the first time here, such as Wildfire, Teen Angels, and the Taffy Sinclair series.

Being familiar with the books covered helps, but Paperback Crush's strength is in its willingness to take teen girls and their interests seriously—while also having fun. "...the good lessons we learned from them are (mostly) worth remembering," Moss writes. "They taught us that girls and girls' experiences mattered, that things our parents or teachers thought were frivolous were actually important enough to spend a book or ten teasing the meaning out of. [...] They made us. And there's something to be gained by going back and thinking about how exactly we got here."

In "I'll Be There For You," Kelsey Miller Dives Into The Complicated Cultural History Of "Friends"