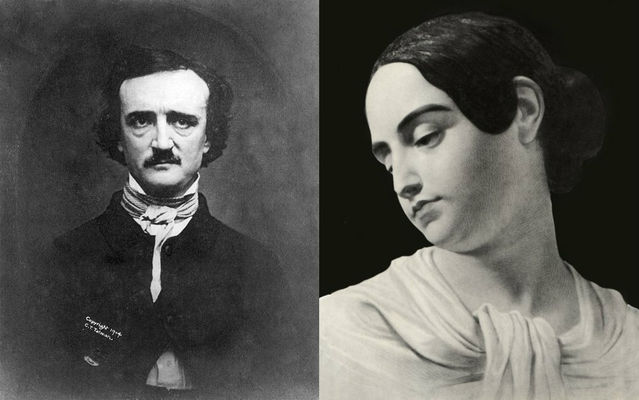 There is a quote by Edgar Allan Poe that reads, “I became insane with long intervals of horrible sanity.”

It’s one of his most popular lines. Many people might assume it’s from one of his fictional pieces and tweet it without any regard to its historical context. Maybe it’s from "The Pit and the Pendulum"? "The Raven"?

This notorious line is actually from a letter he wrote to a fan—a Mr. George Washington Eveleth—dated January 4, 1848. Poe's wife, Virginia Clemm, had died a year prior from consumption, which we know today as tuberculosis. She was 24.

Virginia Clemm Poe was 13 when she married the estranged author—an age, even in the 19th century, that proved too young. So young, in fact, that she forged her age, stating that she was 21 on their marriage certificate. Not only was little Virginia a young girl—she was also Edgar’s first cousin.

While it wasn’t uncommon to marry your first cousin in 1836, the idea of tying the knot with one of your family members in this day and age may seem repulsive. But it wasn’t taboo for Edgar and Virginia. What proved odd was the age difference between them—fourteen years. In fact, Virginia was so much younger than him that when Edgar fell in love with his first sweetheart, Mary Devereaux, Virginia served as a giddy messenger between the two. She was nine.

Not much is known about Virginia other than that of her relationship with her husband, who is arguably America’s most popular poet. So why is that? Shouldn’t a woman who was married to gothic fiction’s most legendary author be well known or…even respected?

I like to think that historians don’t focus, or maybe even care, about Virginia Poe because of her lack of education and “influence,” though I believe both are false. Even though Virginia wasn't formally educated, she was rather bright. Mayne Reid, who was a novelist and colleague of Edgar’s, wrote that after he visited the family he found Virginia was knowledgeable, writing, “In this humble domicile I can say that I have spent some of the pleasantest hours of my life—certainly some of the most intellectual. They were passed in the company of the poet himself and his wife […]”

Despite this, professionals in the historical field seem to focus more on Virginia's appearance than anything else. She was a pretty young woman with dark eyes, hair as black as midnight, and pale skin—the embodiment of the women who graced Poe’s stories. Mayne Reid also wrote of Virginia's ghostly beauty: “[…] I well knew that the rose-tint upon her cheek was too bright, too pure to be of Earth.”

Virginia was a kind woman and, even as she suffered from a vicious case of consumption, was pleasant to be around. Her nurse Marie Louise Shew once said that Virginia drank her wine with a smile, “even when difficult to get it down.”

In the state of New York, while Edgar vicariously struggled to become successful, his little house very drab and cold. Poe was fussy about his pay and eventually quit his job at the newspaper in which he wrote, giving up his annual $800 salary. This left the family of three—Edgar, Virginia, and Edgar's aunt Maria, who was also his young wife’s mother—to suffer under the iron grip of poverty. They could barely afford blankets; Edgar draped his military jacket over his wife as she slept.

Somehow, Edgar managed to purchase a piano for Virginia, despite their dwindling finances—music was one of the few areas in which she showed talent. She often performed for the very few guests that the family hosted, including Captain Mayne Reid.

As for their married life, many historians, including Marie Bonaparte, believe that Edgar and Virginia never consummated their marriage, though this isn't confirmed. A Poe historian by the name of Joseph Wood Krutch implied that Edgar didn’t desire “women in the way that normal men need them." However, according to Dawn B. Sova, who wrote Edgar Allan Poe A to Z, friends of the family implied that the two had a “normal” marriage when Virginia began to sleep in Edgar's bed at sixteen years old, thus inferring physical intimacy.

While Poe was naturally a morbid character, many underestimate the impact of the untimely loss of his wife. When she died, he literally collapsed at her bedside and demanded a portrait be painted of her, as he had no photographs of his “little wife." There is speculation that this painting might be of Virginia, painted on her deathbed, but it hasn’t been confirmed: 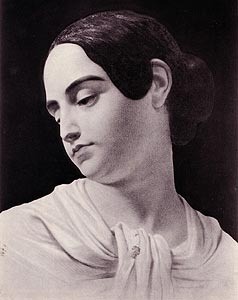 via Wikimedia Commons
One night, as Virginia sang over the ivory keys of her piano, she began to cough up blood. Poe explains this in the letter he wrote to George Washington Eveleth: “Six years ago, a wife, whom I loved as no man ever loved before, ruptured a blood-vessel in singing.”

Virginia was 19 when she contracted tuberculosis, and she died at the age of 24 after suffering for five years. Her health, according to Poe, seemed to maintain a strange imbalance. There were periods of time when she’d regain her natural stature, being bright and hearty, and then others when she’d be an invalid who was confined to her bed.

Virginia’s long-standing illness tore Edgar apart. He became a heavy alcoholic as her condition worsened and, when she passed, he became so despondent that he didn’t care if he lived or died. It is said that a handful of his poems are based on her, including the renowned “Annabel Lee” where he writes:

And so, all the night-tide, I lie down by the side
Of my darling—my darling—my life and my bride,
In her sepulchre there by the sea—
In her tomb by the sounding sea.

It’s true that natural curiosity made Poe gravitate towards the darker things in life, but the death of his best friend, arguably his only friend, rendered Poe entirely useless and his behavior quite erratic. Virginia Clemm Poe is widely disregarded in the historical community…despite her immortal influence on one of the greatest poets of all time.

This was a woman who gave all her love to a man society had branded as strange and fruitless. She should be praised as a saint—someone who remained kind and persevering until her premature death. When Poe was accused of having, not one, but two affairs, she remained steadfast even in frail health to retain her sanity and uphold his reputation. She stomached poverty and was married much too young, even giving up the chance to experience proper schooling to become a wife.

Virginia Clemm Poe might be remembered as a penniless spouse and a victim to others, but to me she is a symbol of hope and macabre inspiration—an immortal and iconic influence whose soul impassioned one of the most revered artists in history. She was an ethereal beauty with a spirit too friendly and too soft for this world.

We must remember that just because a woman didn’t impact history by waving flags or creating something of their own, that doesn’t make her less significant or illustrious. I urge historians to unveil more of Virginia’s history to the mainstream public and to treat her with more kindness and respect, because her sweetness and unconditional humanity brought even Edgar Allan Poe to his knees. For that, she must be remembered.

What Happened To The Wild Ravens Of London?

Tags: Virginia Clemm Poe , Virginia Poe , Edgar Allan Poe , history
Support Feminist Media!
During these troubling political times, independent feminist media is more vital than ever. If our bold, uncensored reporting on women’s issues is important to you, please consider making a donation of $5, $25, $50, or whatever you can afford, to protect and sustain BUST.com.
Thanks so much—we can’t spell BUST without U.