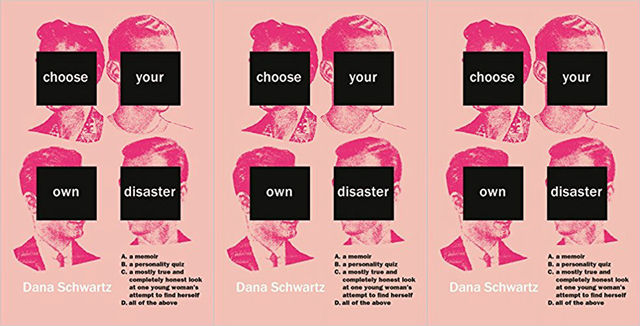 Choose Your Own Disaster
By Dana Schwartz
(Grand Central Publishing)

You might know Dana Schwartz from her prolific Twitter accounts (her alter ego, the satirical @GuyInYourMFA, has over 94,000 followers) but after reading the journalist’s first memoir-slash-choose-your-own-adventure novel, you’ll wish she was your real-life best friend, too. In Choose Your Own Disaster, Schwartz seamlessly moves from thoughtful and often hilarious observations into more difficult and heavy topics, including sexual assault, body image, and bulimia, all while refusing to shy away from the least glamorous details of early adulthood: The reluctant Tinder dates. The hours spent re-watching comedy specials. The lonely, empty apartments.

Much of Choose Your Own Disaster focuses on Schwartz’s experiences falling in and out of love with some all-too-familiar kinds of men (the self-described “asshole,” the guy who ends a relationship via text). But her memoir is at its strongest when Schwartz is falling in and out of love with the many potential versions of herself. Both a memoir and an elaborate personality quiz, this book is a small love letter to women everywhere still figuring stuff out, and it’s a reminder that we aren’t alone. (4/5)

By Lydia Wang
Choose Your Own Disaster was released June 19, 2018
This article originally appeared in the October/November 2018  print edition of BUST Magazine. Subscribe today!

Nadya Tolokonnikova's "Read & Riot: A Pussy Riot Guide To Activism" Is The Kind Of Guidebook We Need Right Now: Review

Tags: Choose Your Own Disaster , Dana Schwartz , books , book reviews , from the magazine