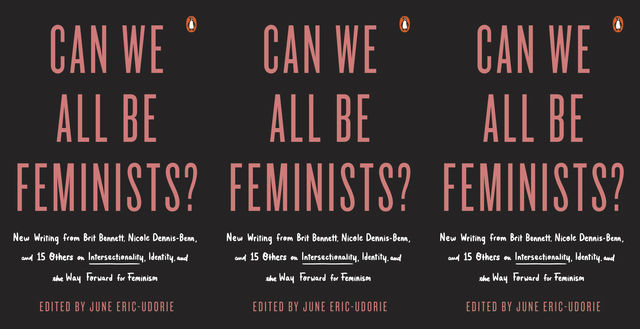 You know your movement’s lost its revolutionary status when everyone shows up to the protest in hot pink hats. Seeing feminism’s as popular as ever now, it’s disappointing what the movement has done—or rather, fails to do—for women as a whole. With so many so many underserved women on the fringes, it's a real state of emergency for the movement’s gatekeepers to transform feminism into one that's inclusive and radical. So what do you do when the girls’ club’s just as exclusive as the boys’ club? Can We All Be Feminists?: New Writing from Brit Bennett, Nicole Dennis-Benn, and 15 Others on Intersectionality, Identity, and the Way Forward for Feminism is a collection of essays edited by 20-year-old writer and activist June Eric-Udorie, named one of the top 100 inspirational and influential women of 2016 by the BBC. The anthology convincingly argues why intersectional feminism should replace the current feminism, which predominantly caters to white cisgender women, ignores the needs of marginalized women, and ultimately fails us all.

The book is filled with reluctant feminists who remain faithful to the movement due to a lack of options, but desperately want to see it evolve. Prostitute Laundry author Charlotte Shane’s essay “No Wave Feminism” is a fine introduction to the anthology, which discusses many of the movement’s failings, including how feminism is now worn as an accessory, with little to no real substance for its consumers. I also like that Shane contested Sheryl Sandberg’s ridiculously problematic book, Lean In, because it’s the perfect example of white feminism’s—aka white privilege’s—utter cluelessness. But the most problematic aspect of feminism is that it oftentimes mimics the very power it thinks it’s fighting against. Shane writes, “Feminism should expand our commitment to each other as human beings, not contract it by replicating the same power structures we should be decisively overthrowing.”

Even when black women are the victims of police brutality and anti-black violence, women are eerily absent from the picture, despite the media attention given to black male victims of the same crimes. Evette Dionne—Bitch magazine’s editor-in-chief—writes “Intersectionality and the Black Lives Matter Movement,” where she discusses how overlooked women are as victims of police brutality in the trending social media and news stories, public outcry, and even protests. Despite staggering numbers of black women being murdered by the police, they’re rarely spotlighted (one exception being Sandra Bland), and of course, are completely ignored by feminism. Dionne describes the harm in leaving the work of protecting victims largely to black feminists alone, and how intersectionality in feminism can give voice, access, and power to the issue. Dionne writes:

“When feminism is solely about the issues pertinent to middle-class, cisgender, heterosexual white women, the issues that impact women of color, such as police violence, are sidelined, and it becomes a parallel problem rather than an integrated one that feminists with access to power and privilege and resources can work toward dismantling.”

For other intersectional feminists, there is no waiting around. Instead, these feminists are reclaiming the space oversaturated with white feminists, and representing themselves—and their unique brand of feminism—as they see fit. In Aisha Gani’s essay “Representation as a Feminist Act,” the author discusses how Nadiya Hussain catapulted to superstardom after winning season six of BBC’s The Great British Bake Off. While it should come as no surprise that a reality show winner would go on to build a brand from her newly found fame, the simple fact that Hussain is a Muslim woman resulted in ridiculous scrutiny from lily-white critics, who seemed to think she shouldn’t try to take up any more than her “fair share” of space in the public realm. How much space is that, exactly? The hypocrisy of white people thinking people of color don’t deserve to claim some of the space overpopulated by white people in the mainstream is appalling.

Despite the burden of trying to break through mass media gatekeepers, resist tokenism and racism, and succeed on one’s own terms, representation is often the key to intersectional feminism—the chance to put one’s voice out there, one that’s genuine, brutally honest, and not some caricature or product of othering that only does harm. Gani writes:

“This is how representation can be a feminist act. When marginalized women face oppression from white feminism and traditional patriarchal structures, claiming such a space is a powerful act. And it is about amplifying and giving that space to other women at the intersections, too, forming those networks, creating those platforms where nurturing and mentorship can happen. For me, to practice intersectional feminism is to disrupt, to firmly plant your ass in a seat at the table.”

And everyone needs to pull up a chair if feminism’s ever going to evolve. We need to collaborate—not compete—for feminism to work.

Until then, intersectional feminists will continue to fight for what’s right and do great things—with or without a mainstream feminism movement that supports them, as proven throughout Can We All Be Feminists?. I loved reading about the myriad directions intersectional feminism takes, and, of course, I’m beyond ashamed and embarrassed that the feminism that has always had my back turns its back away from so many women who clearly need its help more than I do. Eishar Kaur, who writes about growing up feminist within Punjabi culture, concludes her essay with hope: that is, for a unified feminism, one that embodies the humanity and substance the once-radical movement had the potential for in its infancy. Kaur writes, “My hope is that by then, mainstream feminism will look very different, and include space for the women who are changing a culture through many small rebellions.”

Tags: Can We All Be Feminists? , June Eric-Urdorie , books , book review
Support Feminist Media!
During these troubling political times, independent feminist media is more vital than ever. If our bold, uncensored reporting on women’s issues is important to you, please consider making a donation of $5, $25, $50, or whatever you can afford, to protect and sustain BUST.com.
Thanks so much—we can’t spell BUST without U.