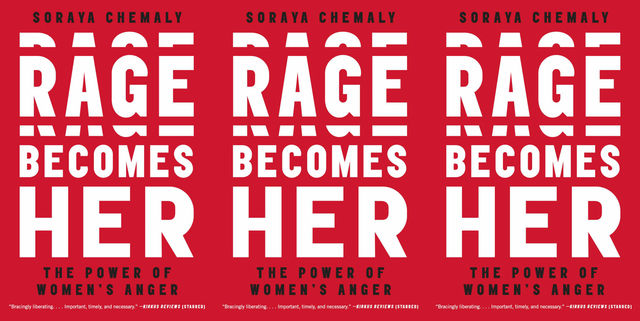 It’s an easy time to be a mad woman in Trump’s America, from reproductive politics to “grab her by the pussy” and everything in between—catcalling, harassment, intimate partner abuse, rape, diet culture, the wage gap, motherhood...the list goes on and on. Whether we hide it from the world or shout it from our laptops, the anger never goes away, and finding peace of mind seems basically impossible when faced with the problems women endure. So what do you do with all that pent-up anger? In Rage Becomes Her: The Power of Women’s Anger, writer and activist Soraya Chemaly describes the myriad reasons women have to be so angry over the course of the book’s ten chapters, and in the end offers readers a few tips on how to channel that anger for the greater good.

Throughout the book, Chemaly discusses a laundry list of issues contributing to women’s anger...including the laundry. That is, all the extra work women do as caregivers for children, family members, and significant others—aka women’s work. But the women's work that actually needs to be done by us is discussed in chapters about the #MeToo movement and women organizing to resist Trump before and after his election, both pivotal moments in herstory. These movements show the greatest potential for women’s anger—detailing the powerful work this powerful emotion can accomplish if it’s used as a tool for something better—instead of being avoided and repressed. Chemaly perfectly describes the power behind the Women’s March that occurred upon Trump’s inauguration:

“The march served an important purpose for women everywhere, showing us all that we could and would defend ourselves and our interests. That we would not shut up and go away. That we would no longer put up with being represented by people who were failing us.”

From harassment and rape to intimate partner violence and murder, everyone largely fails women in the criminal justice system with these crimes—Olivia Benson won’t save us IRL. And the media fails us, too. Chemaly begins the chapter “The Politics of Denial” with the story of Elliot Rodger, who targeted women in a 2014 mass shooting where he shot 20 and killed six people in Isla Vista, California. The story reminded me of the 1989 mass shooting at the Ecole Polytechnique in Montreal, which I read about in the book I Hate Feminists! by Mélissa Blais. In the Ecole Polytechnique shooting, Marc Lépine shot 28 people and killed 14 women before killing himself. In both shootings, instead of discussing the fact that the shooters targeted women, the media instead chose to play up the tired lone wolf and mental illness angles...like always. Even when women are being targeted by terrorists—because that’s exactly what mass shooters are—this doesn’t get discussed.

Despite the sentiment of BS—er, business—as usual, it was still disappointing to learn that Chemaly’s close male friends didn’t even believe her when the scholar expressed her grief over Rodger’s crime, and told them the shooter was targeting women. Men simply do not understand why or how women go through life living in utter fear of some complete psychopath unleashing on them at any given second—despite all the statistics and news stories making this everyday reality for our gender known to the public. It’s beyond infuriating that even the friends of a feminist scholar subscribe to the sexist worldviews that keeps their own friend sadly in check—and them out of the hot water when a news story seemingly turns their gender into the villain. Why is the male privilege so important to keep intact, even at the expense of their friend’s suffering? Even if it’s surprising to read about, it’s really not hard to believe. After all, we’re used to people thinking we're making it up.

So where in the world do we go from here? Rage Becomes Her describes in aching detail so many rage-inducing struggles from the everyday lives of women that the anger seems nearly impossible to overcome. In the book’s final chapter, “A Rage of Your Own,” Chemaly offers readers practical advice on what to do with all the anger women face due to all the issues discussed throughout the book. My favorite piece of advice from this chapter is to name and write about anger as a method of practicing self-awareness. Chemaly writes, “Naming, talking, and writing, are beneficial because they actually interfere with the neurological mechanics causing anger or anxiety. They constitute a kind of anger mindfulness.” As someone who’s used journaling and meditation to deal with emotions, I can attest to this method. Chemaly offers a lot of great insights in this final chapter, and I had hoped for more of the book to be in this vein really, as I was expecting the book’s purpose to be more about how to channel the anger than citing the sources of anger. After all, we all know fairly well the gendered and racial circumstances that lead us to rage. The real challenge is knowing what to do with the anger—how to get to a spot in life where we’re able to live somewhat happily despite the hardships we constantly endure.

Ever since childhood, I’ve dealt with anger, and I’ve never quite understood it. As I was taught to believe, I assumed that I was the problem, and that it was my problem alone to solve. Thankfully I learned that was BS a while ago. But this book helped bring the point home. I’ll definitely reread the tenth chapter of the book to revisit my relationship with anger, as it offers constructive ways to view and use anger. Not manage it, because as the author points out, the notion of managing one’s anger suggests there is something wrong with anger. And there isn’t anything wrong with anger. In fact, as Chemaly writes, “Contrary to the idea that anger clouds thinking, properly understood, it is an astoundingly clarifying emotion.” A necessary delve into a heated subject, Rage Becomes Her challenges the all-too-common perception of having an anger “problem,” and works to demystify women's anger, transforming the difficult emotion into one that’s as coveted as happiness.

Tags: Soraya Chemaly , Rage Becomes Her , books , book review
Support Feminist Media!
During these troubling political times, independent feminist media is more vital than ever. If our bold, uncensored reporting on women’s issues is important to you, please consider making a donation of $5, $25, $50, or whatever you can afford, to protect and sustain BUST.com.
Thanks so much—we can’t spell BUST without U.