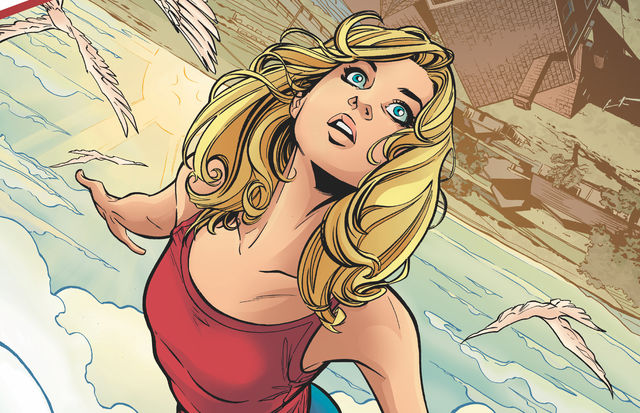 Author Mariko Tamaki has brought Kara Danvers—also known as Supergirl, Superman’s (technically) older cousin—a whole new origin story. Introducing and and gorgeous artwork by Catwoman writer and artist Joelle Jones, Supergirl: Being Super is a graphic novel that deals with contemporary issues with heart and humor. Tamaki took sometime to talk with BUST about diversity in comics, why she gave Supergirl a reboot, and the importanceof having LGBTQ characters in fiction geared toward young audiences. 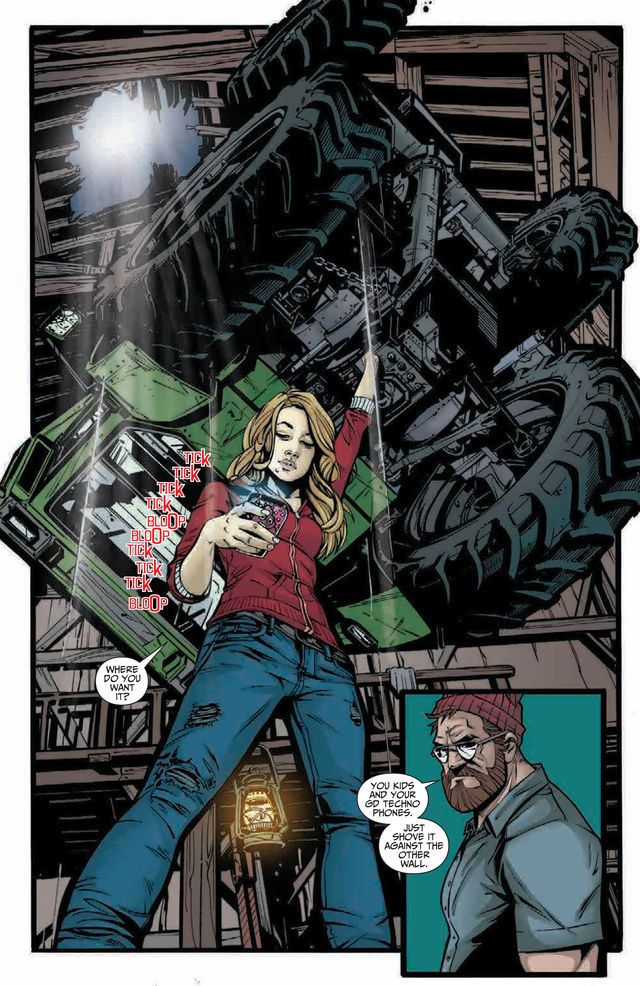 Supergirl has been done in so many different ways. Why do a reboot?

It was presented to me as, "Do you want to do a Supergirl comic?" I was told that it doesn’t have to be in congruity [with the other Supergirl comics], it can just be its own thing. So I was like, "Yeah. That sounds like a lot of fun." There was a couple of things I thought we could change about her story.

Superman and Supergirl comics have always had an outsider theme. Is there any particular group you wanted to speak to?

The outsider theme is something that can apply to so many different groups. I think it’s incredibly difficult as a teenager to be honest about who you are, and I think most teenagers, for a variety of reasons, feel that they are set apart from the people who they think know them the best. My inspiration was this idea that being an alien can mean so many different things. It is such a great metaphor, because there are so many people who feel like they don’t fit in.

I always felt two steps behind or eight feet away from most of the people that I knew when I was in high school, for a variety of reasons. One of the reasos was the fact that I was queer. I was like, "I don’t understand what’s going on, ever." When all my friends were falling in love with boys, I was like, "Please explain why this is such a big deal. I don’t understand." So that is definitely the inspiration, and the thing I think about as an outsider. I also read this incredible book for another project that was about undocumented teenagers and their experience trying to apply to colleges, and I had not known about that part of the American experience; that is something I definitely thought about when we were in the editing stages. 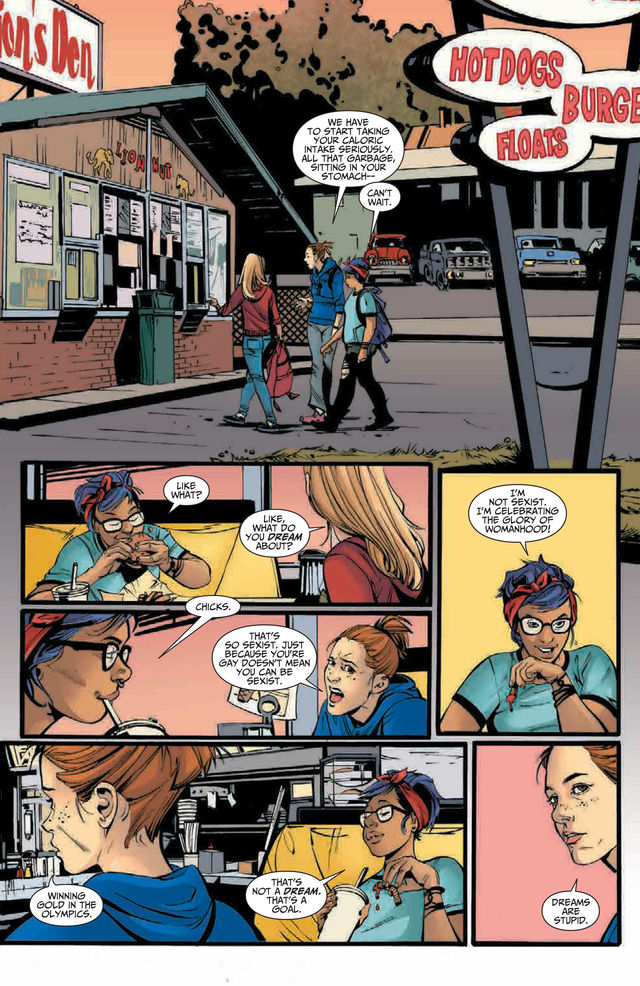 Kara with Dolly and Jen; Supergirl: Being Super, p. 10

I loved that [Kara's friend] Dolly is a lesbian, and she is very comfortable in herself and in who she is; she is an emotional center of the comic. Can you talk a little more about Dolly and the LGBTQ themes you have in the book?

Well, both of Kara’s friends in the book have a really strong sense of who they are, and Kara—Supergirl—is hiding who she is. She’s not really somebody who has stated her identity clearly, and she has people around her who are so comfortable in who they are and what they want to do: Jen knows she wants to be a track star, and Dolly is like, "I am a lesbian and I’m really cool, so that is my identity." It goes to show that you don’t have to be a nerd or an athlete—there are many other identities that you can put on yourself as a teenager. I wanted to give Kara a variety of options to be looking at, not just a Breakfast Club standard.

Why did you feel that it was important to have LGBTQ representation?

That is who is in the world. Why would you not have those people in there? I feel like the question so often is, "Why are you including these people?" And to me it seems like a very specific decision not to include them. We have the canon, and it looks like what it looks like, but there is no reason it can’t include more people. It’s not like we don’t know that they exist. I’ve always lived in a world as someone who is not white, who knows that not-white people are around, and that not-white people are awesome. To me, it has always been a default to say you have to include more than just one type of person. Those are the stories. It’s not like the ground is going to come out from under you if you bring a few more Asian, Latina, and Muslim characters into the scene, you know? It does nothing but enhance the narrative that you’re telling to have more perspective. 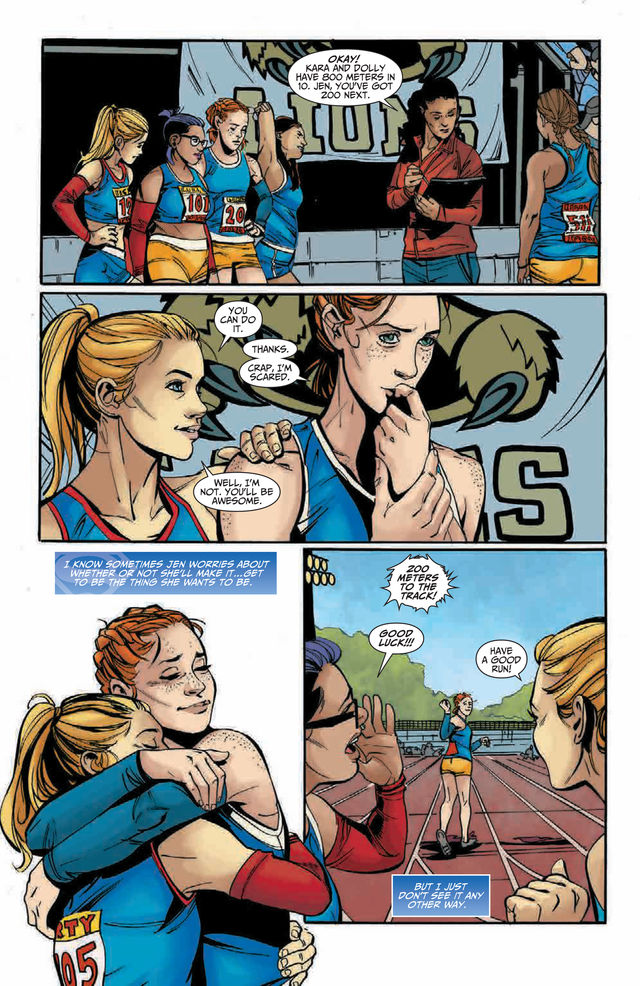 Do you feel that having non-white queer characters like Dolly helps mold an impression of how young readers see the world? That the character you aspire to be like lives in an diverse world, like you do?

I think that’s a really complicated question, because it plays on all these fronts. I was at a school event in Texas once, and I was talking to these kids. I asked, "What other country would you like to see?" And this kid was like, "I’m never leaving Texas because Texas is the best." I was like, "Well, that’s cool; it is pretty awesome here, I give you that, but there are so many other awesome things. It’s not going to erase your sense of self to experience things outside of yourself." I feel like that’s part of it—to  broaden, and to provide windows as mirrors. I also think it’s changing; I did a lot of tours in grades 4-6 recently, with the LumberJanes series, and whenever I talk about lesbian characters, it’s no big thing. That wasn’t true ten years ago.

In Supergirl: Being Super, you also touch on mental health, with Kara’s depression after losing one of her friends. How did you go about tackling the depression in your writing?

I think with every issue you deal with in any story, you try to stay really close to the specifics of how a person is feeling. The decision to have this really traumatic event happen, to me, was about the fact that this is a story about a teenager, and real, big things happen to teenagers, too. It’s not like, "Oh, well, because she’s Supergirl, the only bad thing that’s going to happen is her hamster will be lost." It’s going to be something that is the scale of who she is. She is somebody who has immense power, so having something big happen to her makes sense in terms of her story. In terms of writing about it, I try to think about it as a series of moments, like when she’s texting her friend and they don’t know what to text each other because they can’t just be silly anymore, because this horrible thing has happened. Also, when something horrible happens, you’re not sad 100 percent of the time. You have moments when you’re not sad, and then you’re really sad again. So, I tried to play that out as being as close to what I remember that kind of experience being like. 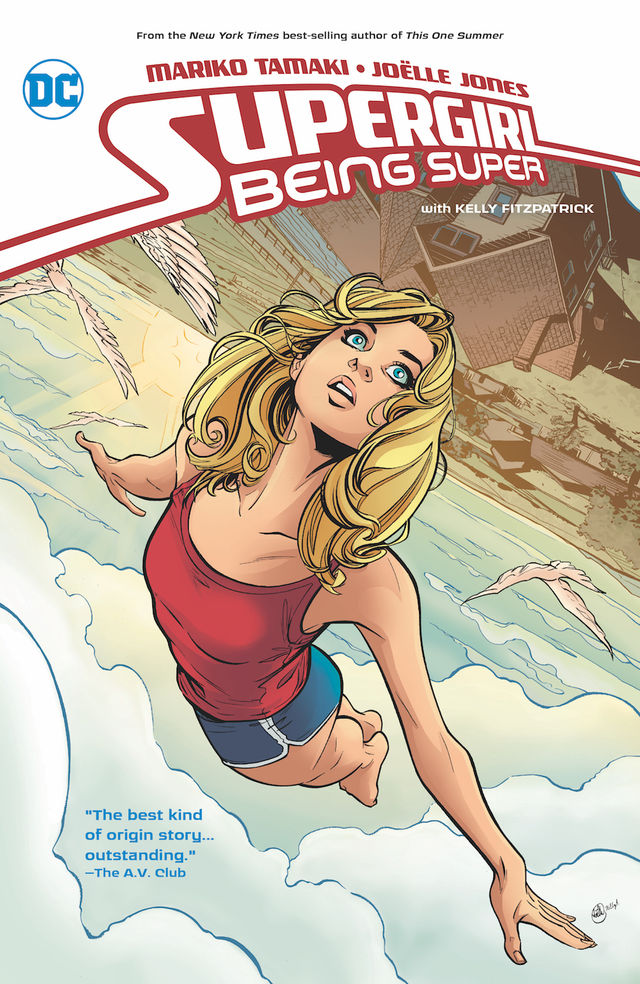 What do you think is the most important takeaway readers from Supergirl? Will there be a follow-up?

I would love there to be a follow-up, but there is no official follow-up right now. I really just hope that people enjoy it. I hope that they really enjoy the story. I wanted to create a Supergirl story that is like Friday Night Lights to me: that has a super emotional investment in characters, and that goes through what they go through. If that’s what people feel after reading it, then I’m very happy.

images from Supergirl: Being Super

The Evolution Of Supergirl, From Sidekick And Sex Object To Leading Lady

'Supergirl: Being Super' Is The Feminist Comic We Need