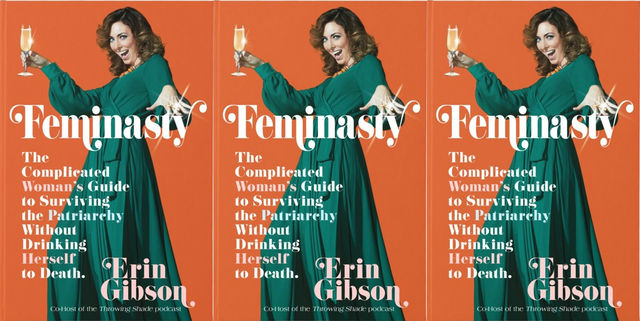 In times like these, we need funny women more than ever. Luckily, we have Erin Gibson. An Emmy-nominated comedian and self-proclaimed "Southern loudmouth," she’s been hard at work turning dire political news on its head with her trademark wit, unapologetic takedowns and absurdist slants.

The L.A.-based actress, writer and comedian cut her teeth working at comedy website and production company Funny or Die (including servin as the creator, writer, and director of the Emmy-nominated webseries Gay of Thrones) and appearing on shows including Key & Peele, Parks and Recreation and The Kroll Show. Since 2011, she’s co-hosted the podcast Throwing Shade, helping the show garner more than 30 million downloads and consistently make the iTunes Top Ten Comedy Podcasts list. In 2017, she and co-host Bryan Safi premiered a late-night TV show of the same name on TV Land that they wrote and starred in.

On Sept. 4, she released her debut book, Feminasty: The Complicated Woman's Guide to Surviving the Patriarchy Without Drinking Herself to Death. The essay collection covers everything from the male-dominated beauty industry to how sexism pervades everything from the workplace to the polls. We chatted with Erin about why she chose to write this book, how she finds humor amid an endlessly depressing news cycle, and how she keeps her anxiety at bay.

"I feel like it’s time for a book that combines hardcore feminism and really silly, absurdist jokes as a way to dilute the power of people in charge and find our collective power."

Why was now the time for you to write this book?

I actually sold this book three-and-a-half years ago. It was right before we started doing our [Throwing Shade] TV show. If I had finished it during the Obama administration, it might not have the resonance it does now. It’s weird how it worked out—all these things kept getting in my way. Writing a book is such a long process, and when I was doing the TV show I had to put it on pause. Luckily, I feel like more people care about these issues than they did a few years ago—these issues I’ve been talking about for the last seven years. I’m excited because it feels like a less lonely place. I feel like it’s time for a book that combines hardcore feminism and really silly, absurdist jokes as a way to dilute the power of people in charge and find our collective power.

What do you want people to take away from this book?

I hope this book gives people that feeling of connection that lets them know they’re not the only ones angry about these things. I hope I can open eyes to some other ways women are marginalized that aren’t as discussed or as obvious as issues like abortion rights and equal pay. This book is angry, and I’m happy about it. It’s definitely a comedy book, but it’s also a manifesto rant couched in dirty jokes and really good Mike Pence and Ivanka Trump burns.

With all the statistics and facts in the book, it’s almost like a snapshot of the state of things for women in the times we’re currently living in.

Who is this book for?

This book is for women who have an inkling or a sense that they’re upset about some things and want to learn more. I know I’ll be preaching to the choir with some women because they’re already upset about this stuff, but they still want to read about it in a way that’s funny and entertaining—not just a dry, news-like regurgitation of depressing facts. I want people to be entertained, and I want them to feel like there is hope. There are ways to change things on an individual level. It’s easy to feel out of control and like you can’t do anything about what’s happening. The most comforting thing for me is to know other women out there feel the same way I do. Some of them are even running for office, and they might be able to change the status quo.

Should guys read this book?

I really hope guys read this book. I talk a lot about rape culture and the ways that women perceive things. I talk about the invisible forces holding women back. It’s really easy to say, “the patriarchy sucks,” but at the end of the day we’re all just doing what we think we’re supposed to do. I think guys would get a lot out of this book. I don’t want a guy to read the book and think that I’m just another author rallying against men. It’s like, no, masculinity is fucking you up too, let’s talk about it. It’s not their fault, but it’s something we all need to fix together.

It seems like you and your Throwing Shade podcast co-host Bryan Safi have struck a magical balance of informing people and conveying how dire situations are in a way that’s hilarious but not flippant. How have you mastered that?

It’s like the valve on a pressure cooker. The jokes on are the valve that releases the steam and lets the pressure out. It’s hard to take action when you feel the weight of the world on you. If we can release that through jokes, then we can do something about it. If I can’t figure out a way to make something funny, I can’t do my job, which is to bring this information to people.

You don’t necessarily need to be someone who grew up like I did, which was lower middle class in Texas, undereducated and surrounded by a bunch of ding-dongs, but it helps because I know how to talk to those people and make it relatable. I eat hot dogs over the sink. I used to swim in mud puddles. I have a soft spot in my heart for small towns and small-town people — I just don’t like small-town minds. I hope I can bridge the divide between people who sound like West Coast liberal elites and people who sound like my Uncle Junior.

What do you do when the news and current garbage fire of it all feels like too much?

Humor helps—trying to take the piss out of it because I think that helps dissolve their power. If you don’t take them seriously then they don’t have as much power, and that’s what jokes do. I also exercise so much. It’s not an L.A. thing. I have to do it. I have a dog who loves walks. My advice: get a dog — it doesn’t matter how bad it is, he comes in and we just cuddle. Try not to drink too much. And if you’re in states with legal weed, you should absolutely be hitting that up.

Get your copy of Feminasty: The Complicated Woman’s Guide to Surviving the Patriarchy Without Drinking Herself to Death and check out Erin’s book tour dates at feminasty.com.

Podcast Of The Week: Throwing Shade

10 Lady Podcasts You Should Be Listening To Right Now

Caroline Cox is a writer, editor, and content marketer in Atlanta, Georgia. See more of her work at carolinecox.net, and follow her at @carolinecox on Twitter because she's funny and "Roses" by OutKast is about her.