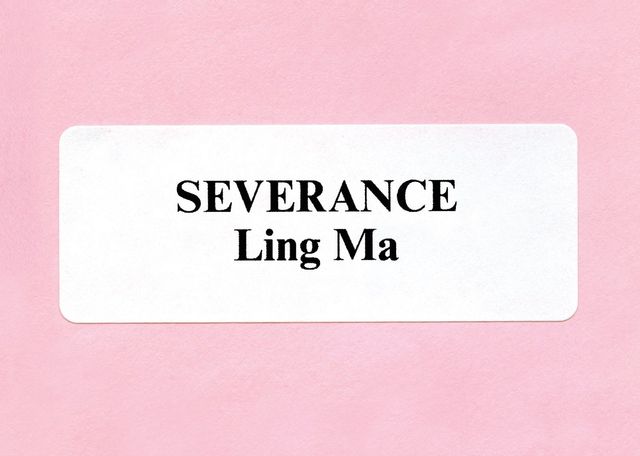 The apocalypse that Ling Ma creates in her debut novel Severance is all too easy to believe: “Shen Fever,” a mysterious disease, originates in Shenzhen, China and slowly spreads around the world, drawing media attention, panic, and uneasy joking—just like the 2014 ebola epidemic and the 2009 swine flu pandemic. But unlike ebola and swine flu, Shen Fever is always fatal...in a way. Those who catch it die, but their bodies live on, mechanically living out the routines of their daily lives—setting a table, turning the pages of a book—as their flesh begins to rot. They’re like zombies, but harmless zombies. So harmless that the survivors of Shen Fever can easily round them up and shoot them.

One of those survivors is our lead character, Candace Chen, a first-generation Chinese-American millennial who was orphaned shortly before the epidemic began—which happens not in some amorphous present, but in 2011, in the midst of the Occupy Wall Street movement. Before the fever, Candace worked in specialty Bible production, finding the cheapest ways to outsource the production of fancy Bibles—often using Chinese factories, including some in Shenzen. As the fever slowly spreads, Candace keeps working, trekking for hours each morning from her apartment in Greenpoint through an increasingly deserted Manhattan to get to her office. She keeps up her mundane worker bee life in the face of the apocalypse because she's been promised a generous payout if she works until a certain date. But it's more than that, too—with the world falling apart, what else is she supposed to do? It's a satire of 21st century capitalism, both a funny and an empathetic one. As Candace's coworkers who have fled the city stop responding to her calls and emails, and the few who have stayed in the office with her decide to leave, Candace needs something else to do with her time. She begins documenting the empty ruins of Manhattan online, under the name NY Ghost.

Ma tells Candace's story in disjointed flashbacks, paired with a present timeline in which Candace has finally fled Manhattan and joined a group of survivors led by the power-hungry Bob. Bob has created creepy, cultlike rituals for his group to follow and is leading them on a pilgrimage to an abandoned mall in the suburbs of Chicago, where he intends to rebuild society. As they get closer to their destination, Candace and Bob increasingly butt heads, causing conflict that could be deadly for Candace.

Like the 2014 post-apocalyptic literary novel Station Eleven by Emily St. John Mandel (a book I love enormously), Ling Ma’s Severance focuses on the small, human details of a world in collapse, and shows how it's possible to rebuild that world. But unlike any other novel of its genre that I’ve read, the details of that apocalypse create resonances the main character’s experiences as a first-generation Chinese American. Ma’s descriptions of an abandoned, ruined Manhattan will stay with me—as will the character of Candace Chen.

Tags: Severance , Ling Ma , books , review , book review
Support Feminist Media!
During these troubling political times, independent feminist media is more vital than ever. If our bold, uncensored reporting on women’s issues is important to you, please consider making a donation of $5, $25, $50, or whatever you can afford, to protect and sustain BUST.com.
Thanks so much—we can’t spell BUST without U.