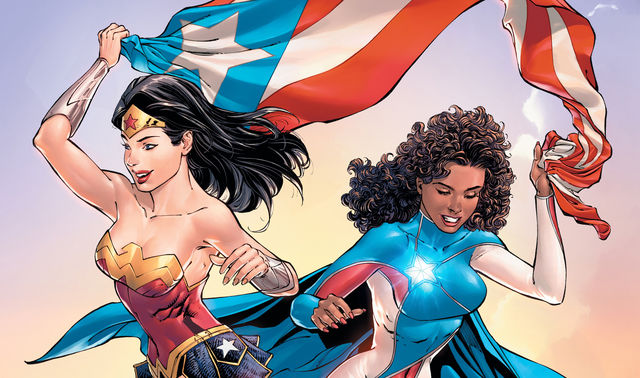 It has been ten months since Hurricane Maria hit Puerto Rico. Since then, we have seen horror stories come out of the island, as well as stories of true heroism. We've seen grassroots organizations come together to send over supplies, and have learned of the heroes on the island literally saving lives. Although Puerto Rico is no longer actively in the news, those helping Puerto Rico have not stopped their efforts. While the cable news cycle may be obsessing over the president’s latest tweet, people on the ground in Puerto Rico are “metiendo mano,” as we like to say. Some Puerto Ricans who lived in the States for years are moving back to help rebuild, while others in the diaspora are helping in their own way.

One of those people is comic book artist and creator of the Puerto Rican superhero La Borinqueña, Edgardo Miranda-Rodriguez. In his latest work, the anthology Ricanstruction: Reminiscing & Rebuilding Puerto Rico, la Borinqueña is helping rebuild Puerto Rico, and she is not alone. DC Comics let Miranda-Rodriguez use the licensing for their most famous characters to tell stories of hope in this anthoogy. Miranda-Rodriguez made this collaboration happen while signing copies of his comic, La Borinquña, at New York Comic Con.“They [DC Comics] literally came to my table,” Miranda-Rodriguez tells BUST, explaining how he, an independent comic book artist, was able to strike such a coveted collaboration. “I was pretty much already overwhelmed by the response that I was receiving. One of the things that were happening is when people would come to the table they would cry, they would ask me about my family—I still had not heard from my family. We were asking each other, hugging, apologizing.”

Miranda-Roddriguez says he feels like this was a unique opportunity. While other people may have been intimidated to ask Didio such a question, Miranda-Rodriguez was not. “My protege was there and they were just looking at me like, ‘What the heck is going on here? How did you have the balls to just talk him like that?' It’s not audacity,” Miranda-Rodriguez says. “We’re in crisis mode right now. We need to look at how we can help Puerto Rico and I’m in the comic book industry. We should be joining forces with talent, with media. Why shouldn't I be looking at how I can work this to help Puerto Rico?” 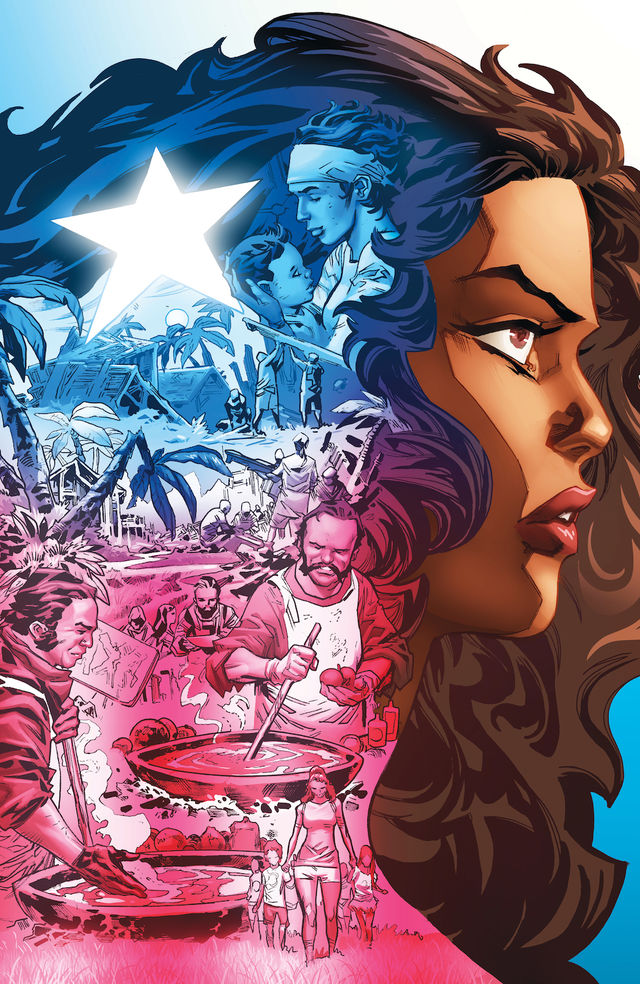 Miranda-Rodriguez didn’t just tap DC Comics in order to create this beautifully written collection of stories. He also personally reached out to over 150 writers and artists to contribute to the anthology. With 100% of the book's sales going to help Puerto Rico, heavyweight talents like actress Rosario Dawson, comic book author Gabby Rivera, comic book artist Frank Miller, and many other actors, writers, and poets were only too eager to lend their talents and voices to the project.

“It’s a very important community to me and my family and it’s one that really shows up with a lot of passion and love,” Rosario Dawson tells BUST about her story for the anthology, which she co-wrote with David Atchison with illustrations done by Dawson's uncle Gustavo Vazquez. “It’s wonderful to be able to figure out a way to collaborate towards justice and support with a community that is so moved by story, artistry, and history, and I think it’s just a really smart way to illuminate the issue without it just being reduced down to a hashtag or something else.”

Dawson says she feels the inclusion of characters like Wonder Woman—who is such a staple of American culture—alongside new characters from Puerto Rico brings the comic to another level awareness and empowerment. 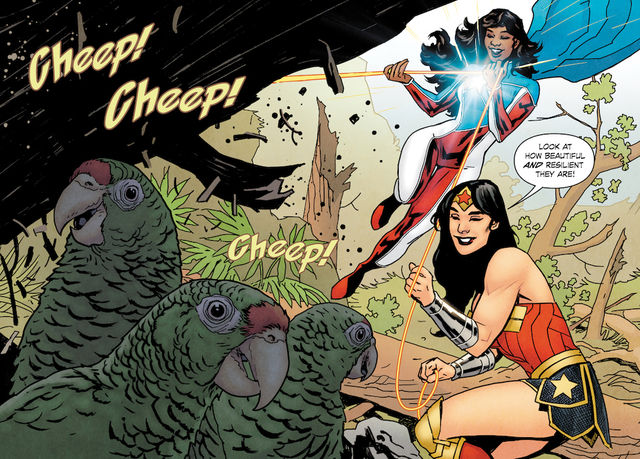 Parts of Puerto Rico are still blacked out, and this blackout is the worst in U.S. history. Thousands of people are still without power and some lack access to clean, potable water. As recently as July 3, the Center for Investigative Journalism in Puerto Rico (CPI) and CNN reported the spike in the number of deaths caused by the bacterial disease leptospirosis were so high that officials should have declared it an epidemic. Much like the response in aid the government gave to Puerto Ricans, the response to these issues by both the federal and the Puerto Rican government has been lacking, leaving these U.S. citizens out of the conversation and devoid of help.

“When we talk about Latinx issues, Puerto Rico is kind of forgotten about,” says Afro-Boricua actress Reagan Gomez-Preston, who contributed a poem for the collection. “Seeing how horrible our administration is—they are horrible anyway, but especially for marginalized people of color.” Gomez-Preston goes on to explain she wanted to do something to help the island and was very happy when Miranda-Roriguez reached to her to contribute.

As the island continues to recuperate, we’ve come to see the biggest response in aid has come from other Puerto Ricans, grassroots organizations, and local communities who want to find a way to help. The Ricanstruction anthology is a part of that help, with 100% of its proceeds going to benefit organizations that are doing the work Puerto Rico needs.

“I hope it raises a lot of money that we could send over. I know we don’t like to talk about money, but I hope people can vibe with it as a love letter, from those of us here to folks that have experienced tragedy on the island," says Marvel’s America creator Gabby Rivera. Her story for the anthology, "Borinegra," focuses on a queer social media maven whose followers worry about her after the blackout happens.

“I wanted to highlight the power of young people and how you know we always think we’re these saviors of the youth and that’s not the case. Like young people are always advocating for themselves and for each other,” says Rivera.

She has a point: after the hurricane hit, one of the fiercest voices from the island was the grassroots group Colectiva Feminista en Construccion, who were able to crowdfund in order to create a center and offer medical and emotional support to women and LGBTQ and non-binary people on the island. The group also organized #BrigadasFeministas, where they would go into different communities to distribute goods.

“I do my best to write with LGBTQ youth in mind always. That is a community that I want to honor and always respect. So first and foremost for them and their survival, it’s like, ‘Hey, I know you exist. We know you are struggling, we know this isn’t easy here, and here’s something so that you can see yourself and so that you can see a reflection of how you're being a part of the community,’” says Rivera. 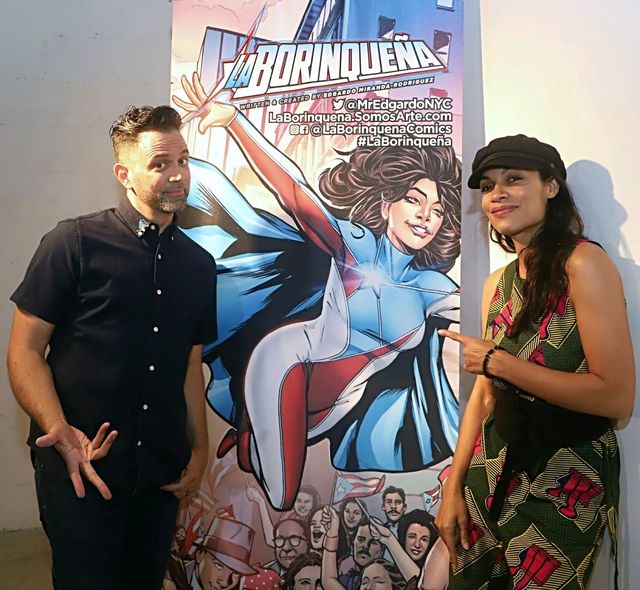 The idea of not having outside saviors was also very important to Dawson. Her story highlights the colonial struggle of Puerto Ricans and who has a say in what their needs are. “I wanted to highlight that history for the people who are just kind of coming around to thinking about Puerto Rico, if at all. You know, there’s been a plight that has been going on for a really long time, and also connecting it to the realities of right now,” Dawson explains.

“There is water that is sitting in bases and these sort of protected areas, and not going out to people, and medicine and all kinds of things. You know there’s the arguable kind of side of, 'Well, we’re collecting these things and then we disseminate them a certain way.' But it’s very complicated. How does that work? Who, locally, is being involved in that conversation how is it being organized? And they’re important questions to ask.” 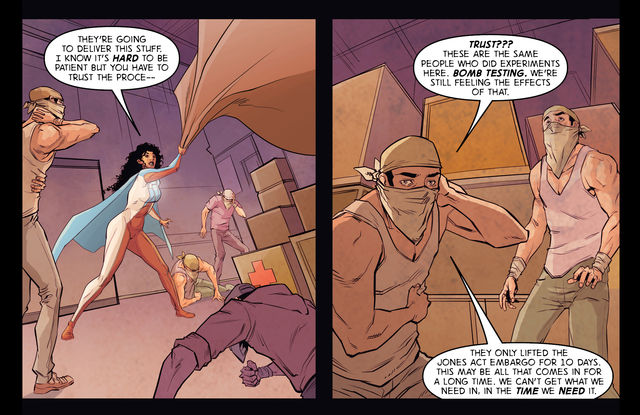 Dawson emphasizes it is important that we are “recognizing having people there on the ground, Puerto Ricans themselves” who are working and know what they need. She explains, “You know we’ve got family members in the military who were like, 'It’s crazy how little information people are getting and access people are getting and it’s just, it’s really wrong and people are in desperate need. It’s like, who do you turn to? And how do you not compromise each other for the sake of the immediate?” 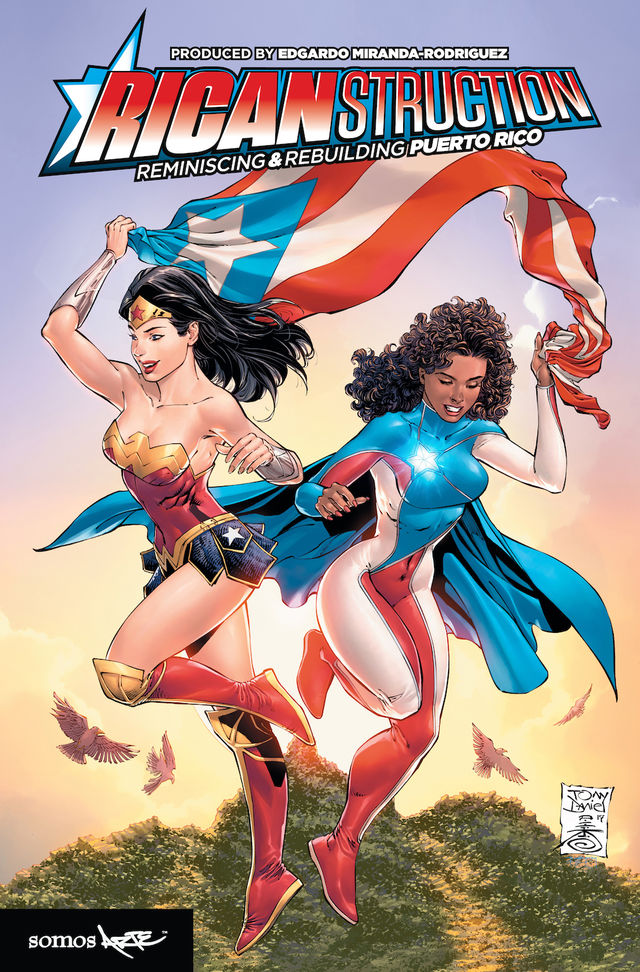 The book is a love letter and more. It is a reimagining of what our beloved island can be and a tool to help those affected by the storm to heal.

“You’re getting some exchange and your getting some culture and you’re getting some history and you’re getting some inspiration and you're becoming a part of a community that is really celebrating the reason as to why we need to come together and help each other," explains Dawson. "I think that just takes it to this extra level that it’s just beautiful to be creating some kind of artistry out of this in this same moment that could sort of resonate and provoke success and inspires us to do more and just buy the book, you know?”

The efforts of Miranda-Rodriguez and all those who took part in this project show that you don't have to have superhuman powers to make a difference.

Tags: Rosario Dawson , Puerto Rico , Hurricane Maria , Edgardo Miranda-Rodriguez , La Borinquena , Ricanstructino
Support Feminist Media!
During these troubling political times, independent feminist media is more vital than ever. If our bold, uncensored reporting on women’s issues is important to you, please consider making a donation of $5, $25, $50, or whatever you can afford, to protect and sustain BUST.com.
Thanks so much—we can’t spell BUST without U.