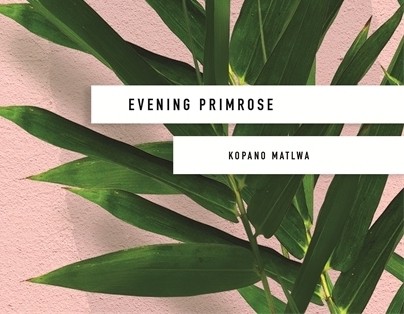 Evening Primrose by Kopano Matlwa numbers under 150 pages, but the slim book with a beautiful cover—pale pink with a green branch—contains much depth in its pages.

The novel—Matlwa’s third, and a nominee for South Africa’s Barry Ronge Fiction Prize—follows a young woman, Masechaba, who has finally achieved her dream of becoming a doctor, a dream brought on by menstrual health problems she suffered as a young girl: excessive bleeding, fainting, and pain that caused her to “[tell] Ma I wanted it taken out, cut away from me and incinerated in the large chamber at the hospital behind a hill.” Masechaba wanted a hysterectomy, but doctors refused to perform it, so Masechaba decided to become a doctor herself: “I only wanted to become a doctor so I could make a friend at medical school who’d be willing to do the hysterectomy that all the doctors we’d seen so far had refused to perform.”

But by the time Masechaba becomes a doctor, her menstrual health problems have decreased, as has her period; what remains is monthly cramps and occasional spotting. Now, Masechaba is struggling with mental health: grief and depression brought on by her brother Tshiamo’s recent suicide, and stress and burnout from her new job in South Africa’s public health-care system. There are simply too many patients, not enough doctors, and not enough resources, so Masechaba’s patients are dying and in response, she has simply stopped connecting with them: “They come to the hospital so late anyway, what can you do really? They are irresponsible, many of them. They know better, but our people refuse to take responsibility for their own health.”

When Masechaba makes a new friend, fellow doctor Nyasha—a politically active immigrant from Zimbabwe—things begin to change. After a wave of xenophobic attacks send injured immigrants to Masechaba’s hospital, Nyasha and Masechaba fight over their care: “He’s just another foreigner to you, another kwere-kwere!” Nyasha says after Masechaba neglects a patient. Masechaba also witnesses how Nyasha is treated by her coworkers: one of them lectures Masechaba for sharing a water bottle with Nyasha—in front of Nyasha. Nyasha shrugs off the incident, comparing it to “growing pains” for South Africa (to which Masechaba answers, “like period pain”), but it means something to Masechaba. In response, Masechaba becomes increasingly politically active—even when Nyasha warns her that she’s putting herself in danger by being so public with her activism.

Matlwa uses descriptive prose and humanly flawed characters to tell a story that brings a myriad of political issues—sexism, racism, xenophobia, corrective rape—to light. She describes violence and pain of many kinds, but she does so with empathy and concludes with hope, making Evening Primrose a must-read.

Tags: Kopano Matlwa , Evening Primrose , books , book review
Support Feminist Media!
During these troubling political times, independent feminist media is more vital than ever. If our bold, uncensored reporting on women’s issues is important to you, please consider making a donation of $5, $25, $50, or whatever you can afford, to protect and sustain BUST.com.
Thanks so much—we can’t spell BUST without U.