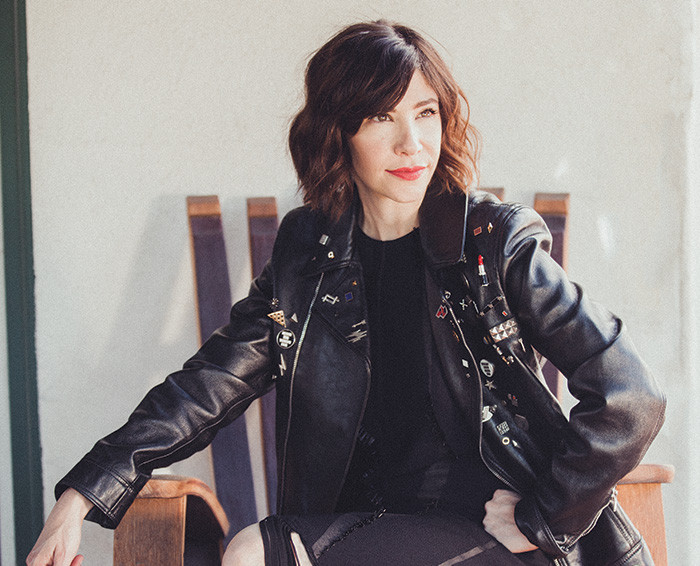 The first time I saw Carrie Brownstein perform, her band, Sleater-Kinney, and my band, Sonic Youth, were both playing the 1997 Bumbershoot festival in Seattle. Watching her on stage, with her flying mop of hair and long arms windmilling in the style of Pete Townshend, I was riveted by her willingness to give it all to the moment. Backstage, her mom told me that Carrie had grown up watching videos of the Who.

That particular detail is one of a few that didn’t make it into her amazing memoir, Hunger Makes Me a Modern Girl (out now), an engrossing account of her evolution from attention-seeking, imaginative child to music fan to influential rock star. As someone in a band who had indie cred but never really conventional success, I related to Carrie’s book a lot. Hers is a bittersweet story about being in a group, and the writing has an energy that is distinctly Carrie: human and relatable.

The book is so intense and amazing. How do [your bandmates] Corin [Tucker] and Janet [Weiss] feel about it?

They haven’t read it! On this most recent Sleater-Kinney tour, I sat with Corin in our hotel room and read passages to her, because I wanted to make sure she was comfortable with me talking about the early years of the band, which haven’t really been written about before. I wanted to make sure that it didn’t feel too revealing, and that I was honoring her privacy. She ended up being flattered, so then I felt better. She was really the person I was most concerned about, because she is so large in the book. When I was writing it, I realized it’s almost a fan letter to Corin.

It was such a clear portrait of that time. And it wasn’t just about you—it was a look into the whole Olympia scene.

I often wonder what bands like yours thought about that strange scene out of Olympia, where everyone was so married to the politics that they couldn’t be separated from the music. I think in retrospect, I felt envious of the fact that you were just, like, “Well, we’re gonna make art,” because I felt this weight and responsibility.

I always felt Sleater-Kinney was the band that brought riot grrrl to a wider audience. You were such a good mix of politics and art.

That was definitely intentional, and it felt very treacherous at the time. Like, when we hired a publicist, literally no one [in that scene] had hired a publicist before. To even acknowledge that you wanted somebody to write about your band—it was like you had to keep that a secret. That’s why I really appreciated playing with you guys. You saw the bigger picture. There was freedom that allowed us to see ourselves in a way that wasn’t so constrained by “the rules.” It’s almost like having an alcoholic parent. You want praise, but you’re so fearful of that scorn.

I think it must have been really hard for [riot grrrl pioneer] Kathleen Hanna to do anything after Bikini Kill. But she manages to still have a large core audience of girls.

Remember how free that first Le Tigre album sounded? Like, the first bars of “Deceptacon”? I really felt like she freed herself. As important and incendiary as Bikini Kill was, I totally felt like she had unleashed herself from people’s expectations. That’s why that first Le Tigre album was so joyous. I was like, “Oh my God, she made a dance record! Good for her.” It was exciting to hear that.

I forgot, until I read about it in your book, that Spin outed you [and your previous romantic relationship with Corin] in your first mainstream magazine article when you were just 21. That’s so horrifying.

Yeah. It’s strange, when I re-read the article before writing about it, I was actually more offended by his characterization of me as a groupie. He described me as this gurgling girl, circling around Corin. I was so taken aback by that description. In some ways, I’m grateful that it happened before the Internet, because it came out, and then a month later, another issue of Spin came out, and the only conversation I needed to have was with myself and with my parents. It felt like a personal assault, but dealing with it felt personal instead of public.

A woman playing music is at odds with the normative path of having a family and raising kids and that sort of thing. It is easier for men to do. You saw firsthand, with Corin having kids and you not having kids, either way you’re made aware of the situation.

Yeah, it definitely feels conspicuous culturally. And it’s weird that there are still these conversations about “having it all.” Having it all to me just feels so capitalist. What are we supposed to be striving for? As I get older, I think about people’s expectations of what it means to age and mature. You know you’re supposed to hit these milestones in terms of career or family, and there aren’t as many signifiers and symbols for women existing outside that. Men can be renegades or rebels or silver foxes. You can be a cool 70-year-old bachelor. But the analog to that for a woman is very precarious—it’s either totally threatening or very pitied. Even Corin, who is married with kids, is still subject to that internal dialogue. I’m curious, since this is my first interview for my memoir, [and you already did lots of interviews for yours], what do you think the questions are going to be like for me?

A lot of people will ask you questions about the book that they know the answers to because they want you to talk about it, and I found that tedious.

Well also, as both of us now know, it’s hard to write a book. The one event that they’re asking about, it might’ve taken two weeks to get that part to sound the way you wanted it to. So it’s a source of frustration. I felt like that with music, too. Sometimes someone will ask, “What is this in the song?” And you’re like, “Ah, just listen to the song. You’ll figure it out.”