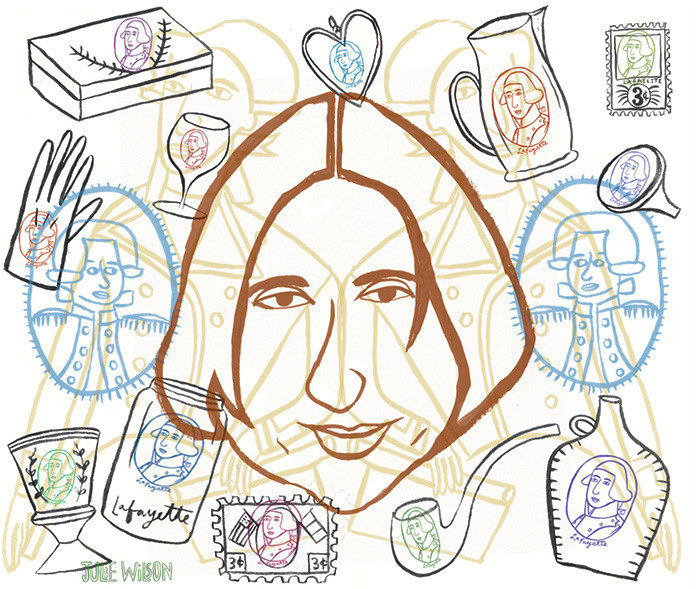 Over the phone from her home in Bozeman, MT, Sarah Vowell talks like she writes: in fast-moving, information-packed passages with a quotable zinger thrown in every few minutes. The 45-year-old author of seven nonfiction books, Vowell is known for her sharp, funny insights into such topics as presidential assassinations, New England Puritans, and the annexation of Hawaii. Her latest book, Lafayette in the Somewhat United States, covers the “bickering and infighting” of the Revolutionary War through the lens of George Washington’s pal Marquis de Lafayette.

Even if you’ve never picked up one of Vowell’s books, you probably know her voice from her long tenure on This American Life, her appearances on The Daily Show, and her role as Violet in Pixar’s The Incredibles. (As for The Incredibles 2, Vowell says, “I think I have a job, but I don’t know much else.”)

When I ask Vowell if she can see herself writing a book about another country, her answer goes on for almost 10 minutes and covers her mission to educate Americans about their own history, her recent vacation to Asia, the significance of hula, and a comparison of Japanese gardens to playing jazz to writing. “What’s not there,” she explains, “is just as important as what is.” 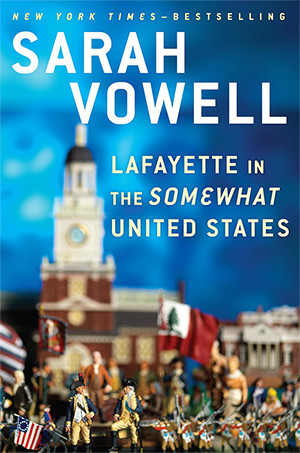 Lafayette in the Somewhat United States is the first book you’ve written that focuses on one specific person. Why Lafayette?

The reason I was interested in Lafayette wasn’t so much his service in the Revolutionary War. It had to do with when he came back to the United States as an old man in 1824. There was this enormous hoopla, like Lafayette-mania. Writing about American history, sometimes there’s not enough of the love-fest. And then the story took on a life of its own. I was researching this during the government shutdown of 2013 and a lot of the sites having to do with Lafayette were closed. There’s this undercurrent throughout, where every time I’m trying to pinpoint this one soldier, every step tells the story about how Americans have always been engaged in this ongoing, constant argument with one another. This is the country we started out as, and this is what we’re still like. We’re inefficient and we get on each other’s nerves, but ultimately, I would rather live in this cesspool of argument than some other place where you’re not allowed to bug your neighbors with your pursuit of happiness.

One moment that really stood out to me was when you pointed out that if the U.S. had lost the Revolutionary War, slavery would have ended so much earlier.

The British Empire outlawed slavery in 1833. It’s why Canada was the terminus of the Underground Railroad. I love the phrase “all men are created equal,” and I believe in it, and I feel like most of the world’s problems would go away if everyone started believing in it. However, I think if we’re going to celebrate the Fourth of July, if we’re going to have our hot dogs and our marching bands, we also need a little bit of sobering reflection about how American Independence was not necessarily a good thing. When Frederick Douglass gave his famous Fourth of July speech, he said to the white people, “This is your Fourth of July, not mine.” I think what the Fourth of July stands for is enormously complicated and can’t be contained in a single hot dog.

You touch on the French Revolution and the Reign of Terror. Can you see yourself writing a book about another country’s history?

I don’t know. I’ve come to see part of my mission, if I have one, as educational. I guess I am a bit embarrassed about my country’s ignorance about its own history and I feel that if I can do something about that, even if it’s small—and maybe book writing is not the most effective way to communicate with the American people—it’s my little contribution.

I went back and looked through your book Assassination Vacation and it’s such a Bush-era book. Lafayette in the Somewhat United States is also really tied to its time. How do you go about writing history from such a specific, modern standpoint?

It’s not exactly intentional. I think it’s more intuitive. One thing is, I was brought up Protestant so I’m working through a lot of issues in my books that my Jewish pals would just talk about with their therapists. I was almost done writing that book about presidential assassinations when I realized, “Oh, I really have a problem with the president.” With this book, it was just so blatantly obvious because the government shutdown was happening. I don’t see history as a closed book. There are a lot of tangents in my books. They zigzag between the present and the past. Me going to these sites and researching and meeting locals becomes part of the story. I don’t write those history books where you don’t know where I was. If I go somewhere, I talk about going there. It seems all of a piece to me.