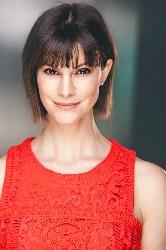 Devin Sidell is a Los Angeles-based actress whose Brooklyn Nine-Nine singing criminals scene recently went viral.  She has appeared on numerous television shows including Ray Donovan, Parks and Recreation, and NCIS, and is currently working with screenwriter Steven Sears on a dark comedy feature film based on her preventative surgeries.  You can follow her on Twitter at @devinsidell and Instagram at @devin.sidell at visit her website devinsidell.com