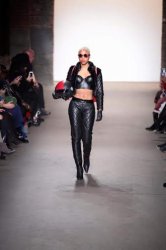 Synopsis
International model Stewella Daville or Tiffany Daure' to most was born in the Bronx on August 27, 1981. She began modeling at age 30

Top Model
One of NYC top freelance model, supermodel in some of her fans eyes, with an exquisitely edgy look she began her career on the catwalk, she quickly took the industry by storm. Modeling for designers such as Kenya Smith, Ellington Hughs, John Ashford, Thomas Lavone and many more. Daville has been published in several magazines such as Harpers Bazaar UK, GQ UK,WMDSF Magazine, Rare Fashion Magazine and many others.

In Recent Years
In addition to being a model, she  is a well recommended nyc nanny with high end fashion industry moms shes lucky to call a boss. She is an amazing mother to a 15yr old son. She wants to look into acting and has been doing some background work with shows such as Gotham & The Get Down. During NYC FW she is model coordinator of Small Boutique FW whichis the number one independent fashion show during NYFW. This beautiful women has now been linked with such a highly recognized campaign Denim Day NYC