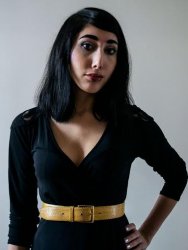 Joanna C. Valente is a human who lives in Brooklyn, New York. She is the author of Sirs & Madams (Aldrich Press, 2014), The Gods Are Dead (Deadly Chaps Press, 2015), Marys of the Sea (forthcoming 2016, ELJ Publications) & Xenos (forthcoming 2017, Agape Editions). She received her MFA in writing at Sarah Lawrence College. She is also the founder of Yes, Poetry, as well as the chief editor for Luna Luna Magazine, where she curates personal essays, interviews, and writes about sexual assault, abortion, and Tarot. Some of her writing has appeared in Prelude, The Atlas Review, The Feminist Wire, The Huffington Post, Columbia Journal, and elsewhere. She has lead workshops at Brooklyn Poets, and has been a featured speaker at a “Shout Your Abortion” event.