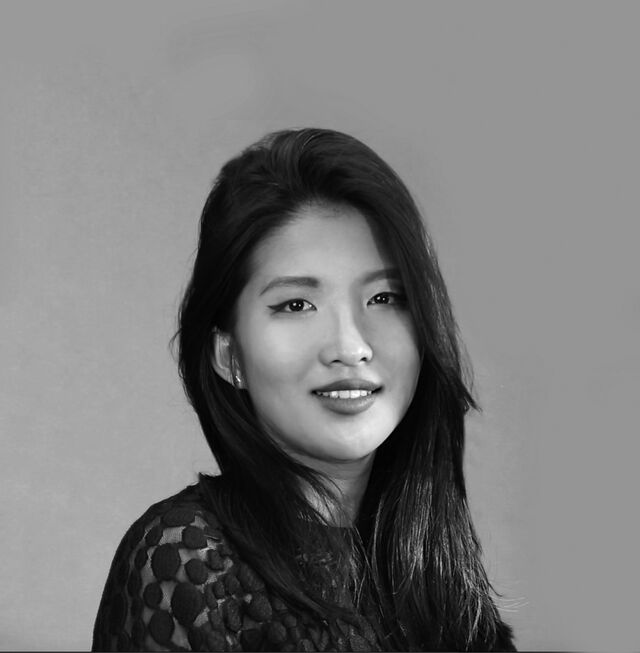 Saneun Hwang is a visual artist and graphic designer based in Brooklyn, New York. Hwang moved to New York City from Seoul, South Korea eight years ago to pursue a degree in Fine Arts from the School of Visual Arts. There, she learned how to channel her passion for drawing and crafting into new mediums, like graphic design, mixed-media art, and photography. Her latest exhibition, “Concrete Utopia,” opens Friday, July 23 at Local Project Art Space. BUST sat down with the artist to discuss her creative process, the disillusion of New York City, and her latest projects.

Where do you find inspiration for your work?

After living in New York for a few years, art naturally became a part of my daily life. I love seeing art in museums and galleries but I also find joy in going to local bookstores, too, and being inspired by other artists’ work — Printed Matter is one of my favorites.

I see potential in everything: posters, ads, typography on the street. I discover something new every day on routine trips to the grocery store or afternoon walks. When I see something that inspires me, I collect it. You should see the stack of prints, brochures, and flyers I’ve gathered over the years.

I enjoy the choreography of everyday life. Most of my photoshoots happen impromptu on my regular commutes. Through my work, I want to present an empowering narrative of daily life. Sometimes the seemingly ordinary holds something incredibly special. How has living in major urban environments impacted your art?

I’ve lived in cities my whole life. I’ve witnessed how rapidly urban development can devour a city’s history and culture. In Korea, I wanted to escape the homogenous high-rises and constant competition to move up the social ladder; I thought New York City would provide an escape from that but shortly after moving, I realized there’s no such thing as a utopia. When I accepted that, it put things in perspective for me. Instead of seeking a perfect place, I began to focus on capturing perfect moments.

What influenced “Concrete Utopia?” What was the goal of this project?

I was heavily influenced by the Constructivism movement of 1920s Russia. That style aims to reflect modern industrial society and capture urban spaces. As a graphic designer, I love how color, geometry, and text play off one another in that kind of work. I decided to reinterpret that genre using photo-based imagery and concrete poetry.

In this project, I made New York City my subject. I photographed building facades, glass, construction sites, and layers of concrete landscape, emphasizing how the interplay of texture, color, and material creates compelling patterns of urban imagery.

I wanted to capture the city as it was at the moment. Every block of New York is under construction, altering our surroundings so they’re unrecognizable. It made me wonder about the identity of a city. What is it becoming? What’s next? I felt the need to document it before it became something else entirely, something unfamiliar. 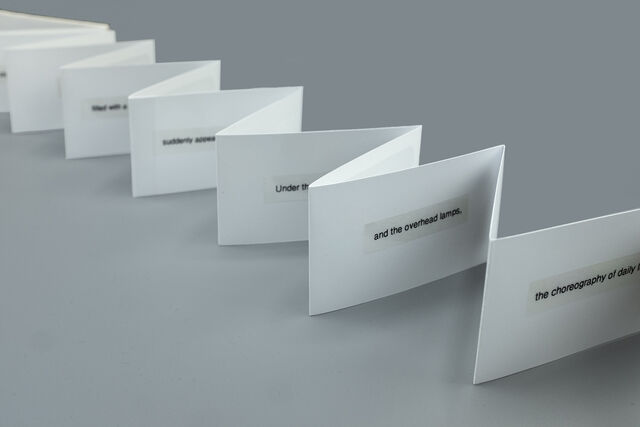 What role does poetry play in “Concrete Utopia?”

As an immigrant and an artist, I’ve often had trouble communicating my thoughts. It’s frustrating and sometimes I find myself afraid to speak up for fear of not getting it exactly right. I felt like I was drifting in a sea of abstractions that I had no way of articulating. In an attempt to shape my thoughts into words, I started keeping a visual journal and filling it with concrete poetry.

In “Concrete Utopia,” the juxtaposition of photography and poetry serve as two very different communicative tools that help me both ask and answer questions I may have trouble vocalizing.

How has your experience in New York City shaped you as an artist and person?

Before I moved to New York City, I was under the false impression (as many of us are) that it was a glamorous dreamland. As a woman, a person of color, an immigrant, and an artist, it hasn’t always been easy.  But it’s made me more resilient and confident in my abilities and my creative pursuits. I’ve learned so much since I moved here and I appreciate the community I’ve made for myself. It inspires me to give back in return through my art. What other projects are you working on right now?

Recently, my creative partner, Keiko Nabila Yamazaki, and I jointly received the 2021 Queens Art Fund, a New Work Grant from the Queens Council On the Arts. We were accepted with our proposed project “Queens: a Culinary Destination,” an art exhibition in Long Island City that will feature illustrations, photography, and drawings. The theme is to explore the culinary diversity of Queens, shedding light on the different cultures and the influence of food in order to promote Queens as a culinary destination.

Keiko and I both love food and experiencing new restaurants. In 2020, it was really saddening to witness so many small restaurants close their doors. Those that remained open were forced to downsize their operations in order to survive. The way we approach food has shifted as well. The communal aspect or joys of a shared dining experience have been replaced in favor of the convenience — and isolation — of take-out. That disconnection is what’s inspired us to capture the love and togetherness that food can inspire.

What are you looking forward to for the rest of the year?

Getting back to pre-Covid (or surpassing post-Covid) life has been really hard. But the other day I stopped by Human Relations, a local bookstore in Bushwick, to say hi to my friend. I ended up staying there just chatting with a few other people I didn’t know for about three hours! We laughed about how awkward it was at first since moments like that have been few and far between, but we realized just how much we missed spontaneously getting to know strangers. I can’t wait for more of that — throwing myself into a new environment, meeting new people, having exciting conversations, capturing special moments of our daily life.

I’m also excited to be releasing my book “Two Parallel Lines,” a project I’ve been working on for the past eight years. This photo book captures everyday moments I encountered on the subway and will be available both in local New York City bookstores and online.

I’m grateful to have so much to look forward to.

Tags: Concrete Utopia , Saneun Hwang , new york art exhibitions , mixed media art shows in new york.
Support Feminist Media!
During these troubling political times, independent feminist media is more vital than ever. If our bold, uncensored reporting on women’s issues is important to you, please consider making a donation of $5, $25, $50, or whatever you can afford, to protect and sustain BUST.com.
Thanks so much—we can’t spell BUST without U.