UPDATE: This Jingle Dress Museum Exhibit Explores The History Of The Native Garment While Bringing Attention To The Missing And Murdered Indigenous Women Movement 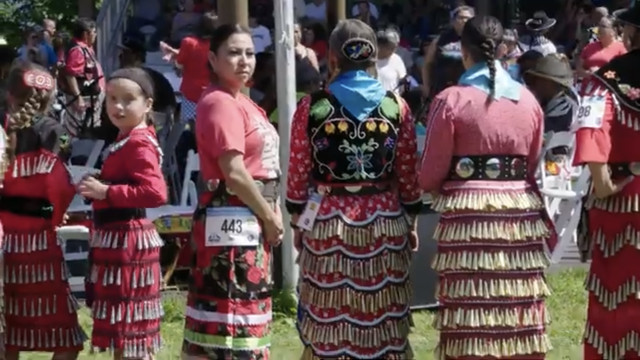 Historic art forms and stories are on full display at the Turtle Bay Exploration Park. A new addition to the museum is an exhibit on the Jingle Dress, a traditional Native garment typically worn during ceremonies.

The Jingle Dress and its dance are believed to be a source of healing for Indigenous communities. In addition, it sheds light on violent crimes committed against Native American women. For April Carmelo of Redding, a guest curator and citizen of the Greenville Rancheria, this exhibit is personal.

“This exhibit is personal to me because I lost a sister, Mary Carmelo, (who was murdered) in 2013,” she said to Record Searchlight. “Her remains were returned to me in 2018.”

The exhibit contains five women's dresses and two kids’s dresses. The centerpiece, a scarlet jingle dress, is a symbol of the Missing and Murdered Indigenous Women (MMIW) movement, Carmelo explained. "The Star Quilt that hangs behind the garments — a symbol of honor and generosity — also includes the image of a woman in a red jingle dress and the MMIW movement's logo," Record Searchlight reported.

The Jingle Dress originated in the early 1900s when the granddaughter of a medicine man became sick. As the man fell asleep, he dreamt of four female spirit guides wearing the Jingle Dress and dancing. His spirit guides taught him how to make the dress and the dance. They claimed that making the dress and performing the dance will heal his granddaughter.

After the man woke up, he quickly made the dress. Once he finished making the dress, he had the entire tribe watch the sick girl dance. At first, she was weak and was supported by the tribe, but she slowly gained the strength to dance. Wearing the dress and performing the dance on her own cured her of her illness, The National Congress of American Indians documented.

Indigenous women are murdered at 10 times higher than any other group. According to the CDC, murder is the third leading cause of death for Indigenous women, and more than half have experienced sexual violence. The Jingle Dress exhibit aims to bring awareness to these ongoing issues.

“The Jingle Costume is a real story about therapy and the assumption and energy of prayer,” Carmelo said. “I hope (museum friends), too, consider within the energy of prayer."

This exhibit concluded September 6, 2021 but an in-person performance of the  traditonal jingle dress dance, Art Heals: The Jingle Dress Project, is on at Birmingham Museum of Art on October 16th.

For Centuries, Some Asian Women Have Chosen To Live Communally, Preferring To Take Care Of Each Other Rather Than Rely On Men

Hair Art: The Morbid Trend That Dominated The Victorian Era