Details
BY Sydney Jackson
IN Arts
Published: 14 May 2021 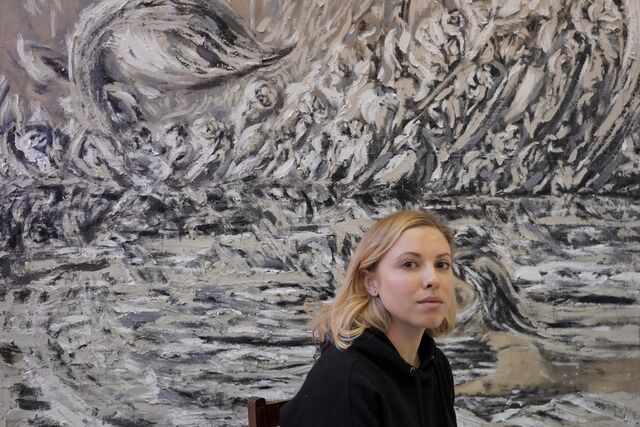 Typically, when we ruminate over the inspirations behind some of the world’s most beautiful works of art, we tend to assume that artists are always drawn to the extraordinary. However, there are some who seek out simpler subjects, and through them, achieve something just as grand. London-based artist Gianna Dispenza’s solo exhibit, Overcome by Joy—being presented at the Charles Moffett Gallery in New York through June 5—is a celebration of the sentiment that there is beauty in the small things. In the following conversation with Dispenza, we discuss the inspirations and emotions behind her stand-out pieces.

I am curious to learn more about a place in London called the Ladies Pond and its connection with the pieces you will be presenting for the exhibit. What personal emotions came about when you originally set out to visit this space?

Honestly, I was skeptical of the Ladies Pond at first. These are wild swimming holes segregated by Mens, Ladies, and Mixed and it felt a little daunting and strange to operate in partitioned spaces. Plus, it’s a serious issue, but women aren’t always set up to trust one another. There are a lot of ways we are actually taught to perceive each other as a threat or to distrust. But spending time there and in the company of all of these women was reassuring almost in a primal way. It was a privilege really, and the whole experience was unexpected. For one, I couldn't have anticipated the relief of swimming or lounging around without being sexualized. Then, I was quite moved by the sense of equality connecting everyone at the pond. This Pond is open to anyone who identifies as a woman, and despite the many people there whose difference might pose challenges outside—because of class or race or body type or age—the pond felt like a place where difference had no hierarchy, it was just enriching. It’s rare to share such comfort and fondness as a stranger among strangers. And so I’ve continued to go back to the Ladies Pond because, in the middle of London’s metropolis, buried in heath and enveloped in greenery, there is this fortuitous, mysterious, little pond that is perhaps the most generous place I know in London. 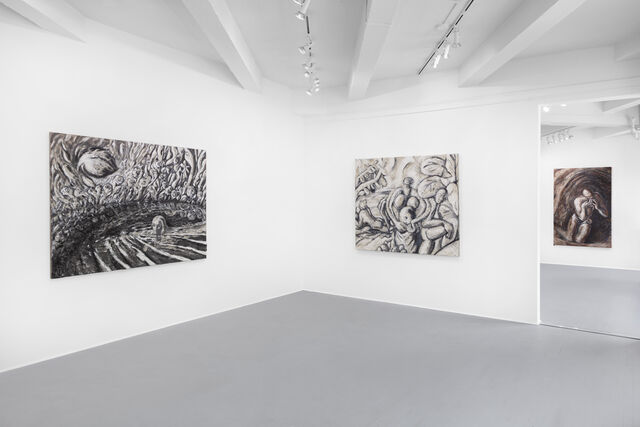 How much of your work do you feel is reflective of the structures you encounter in your daily life?

I’m most interested in the breaking points of structures. This can be capitalism or patriarchy or religion or beauty—structures can be interpreted in so many ways, but what intrigues me most is the moment those biases lose traction; the moment we realize we’re behaving in line with someone else’s ideas and making judgments and projections based on something more like propaganda than empiricism and understanding. For me personally, when the tension between expectation and experience reaches a breaking point, it’s a really wonderful and beautiful thing. It’s precisely at that point that growth and productive conversations can happen. And so in my work, I try to orbit those moments of slippage; to open up the possibility of more than one valid answer and emphasize the value of different interpretations or multiple interpretations, sometimes simultaneously.

Have there been physical spaces, such as the Ladies Pond, that have inspired other works?

The Pond affected me because it revealed some tension between what I thought and what I experienced and this happens all the time, usually with a connection to place, but also in culture, beliefs, or recurring images in art or media. Those moments are the seedlings for most of my work. The Pond series started because this unlikely oasis in the middle of a city offered some relief from being sexualized while bathing and it also offered a simple but vital experience of camaraderie. It feels good to depict this as a woman painting other women. I’d be the first to admit that my work incorporates elements of modernism, but it also reconsiders tropes around women bathing in art, specifically associated with male modernist painters, from the perspective of a woman. But I find culture, belief, and recurring images just as fertile as physical spaces—much of my work draws directly from newspapers and media, the sports section in particular. I find the sports section to be an unusual space of extreme emotion and intimacy among men. Another series is about women literally sitting backwards on chairs. And this series, which is ongoing, is the product of tensions between the iconic image of Christine Keeler seated nude and backwards on a chair, and a watch ad of the motorcycle racer Marc Marquez seated in the same position, to a strikingly different effect. A few years ago, my paintings had a strong connection to Beirut where I also lived for several years and where my daily experiences were constantly editing what I had—often unknowingly—absorbed about Lebanon simply by consuming American culture. 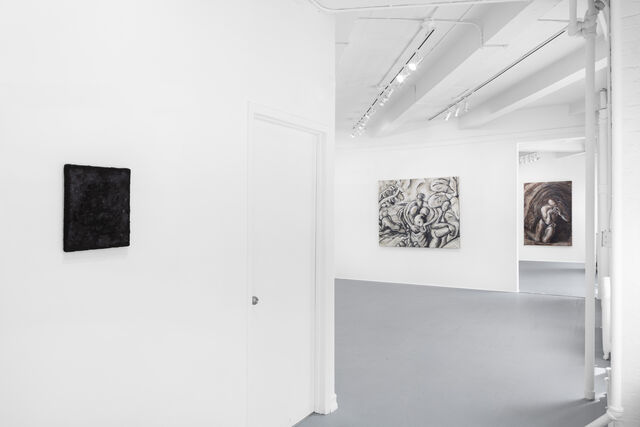 Do you feel that the medium you use is related to how you felt about your subjects?

The medium and the feelings or ideas behind these pieces work very much in unison. For one, they are created primarily in grayscale, which removes some of the emotional associations with color and gives prominence to the role of context. The limited palette and strategically placed colors help open the work to multiple readings. "Swimmer," for example, could also be interpreted as drowning, transcending, or something else entirely. In "Overcome by Joy," there are red, yellow, and blue wedges of oil stick which are used sculpturally to describe confetti, while the rest of the palette almost has a pious, Renaissance, feeling and is muted in graphite, buff clay, and terracotta. "The Bathers" is built largely with industrial materials and is sturdy enough that if you wrap your knuckles against the piece, it sounds like knocking on a door. I appreciate how physically robust this particular work is, especially in relation to the strength of the central figure and the nudity of the other figures. At the same time, there are more temporal materials like pollen and citrus buried into it. So color and medium are used somewhat strategically, playfully, and experimentally—often added, buried, and excavated multiple times until I find the right balance. 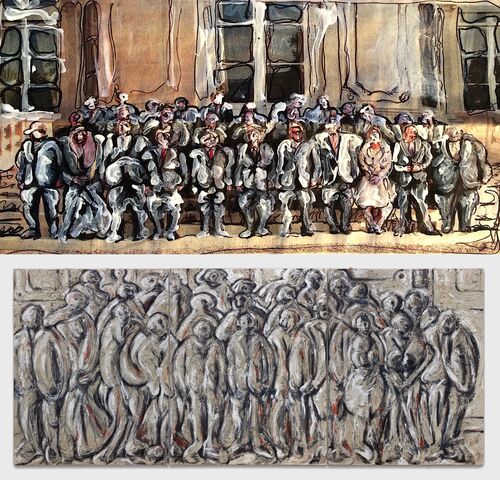 In honor of the title of your exhibit, what has been making you feel "overcome by joy" these days?

It’s a tricky question to answer when there is so much challenging us all, but in some moments, I really do find peace and comfort in swimming. I’ve left London for the summer, and am staying in Maine where I live on a tidal inlet called the Salt Pond. The 46 degree Atlantic plunge suspends my thoughts and feelings (I literally go numb). It’s a kind of full-system reboot, and it allows me to return to the world a little more energized, clear-headed, and rooted in my environment. It’s a kind of euphoria, if not by way of shock.

How do you feel the creation of these pieces has impacted you?

The thing that affected me most might have actually been showing the body of work. I’ve spent this past year working in solitude, usually at night between about 4 p.m. and 3 a.m. I worked very privately and as a result, I think this has been one of the most intimate relationships with a body of work yet. Not only because these pieces served as my company but also because the sheer scale and weight of the work required my entire body to engage, all the time. A lot of physical energy was put into these pieces. My hands and body are impressed and folded into the mark-making. So to show them and speak about them to so many people so suddenly has felt vulnerable and revealing at times. And at the same time, bringing them out of my studio, sharing them, and especially seeing all the works displayed together in Charles Moffett’s luminous New York gallery, has been pure joy. 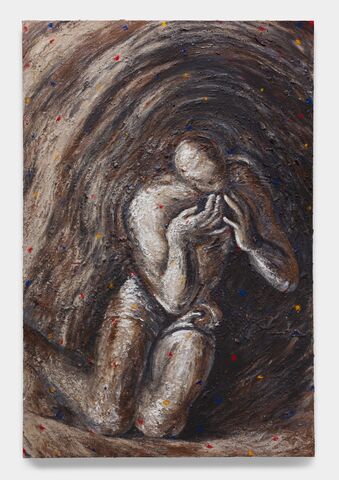 The full exhibit can be viewed here.

"Little Amal," A 12-Foot Syrian Girl Puppet, Will Travel 5,000 Miles As Part Of A Public Art Project About The Plight Of Refugees

Tags: Gianna Dispenza , Overcome by joy , exhibit , visual artist , interview , Charles Moffett Gallery , NYC , London
Support Feminist Media!
During these troubling political times, independent feminist media is more vital than ever. If our bold, uncensored reporting on women’s issues is important to you, please consider making a donation of $5, $25, $50, or whatever you can afford, to protect and sustain BUST.com.
Thanks so much—we can’t spell BUST without U.