"Little Amal," A 12-Foot Syrian Girl Puppet, Will Travel 5,000 Miles As Part Of A Public Art Project About The Plight Of Refugees

Details
BY Melody Heald
IN Arts
Published: 13 May 2021 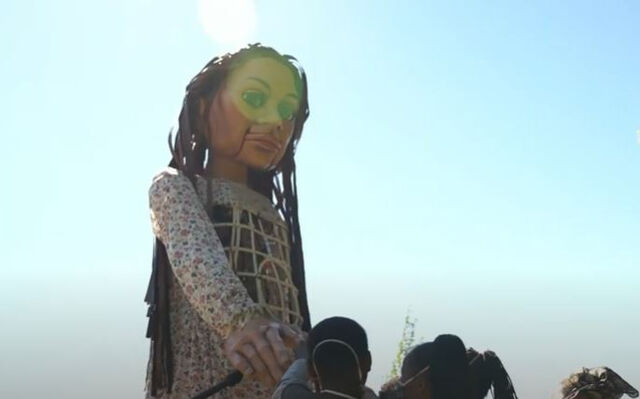 Nine-year old Amal is not a typical girl. Standing almost 12 feet tall, "Little Amal" is a puppet that's set to travel across Turkey and Europe in search of her mother.

This ambitious public art project, called "The Walk," was created by a humanitarian theatre group called Good Chance. In this project, Little Amal will travel to 70 different towns, cities, and villages, including those based in Greece, Italy, Switzerland, Germany, Belgium, and France, until she reaches the U.K.

The Walk Project was meant to have taken place between April and July of 2020, but was delayed by the pandemic, The Guardian reported. Amal’s journey will begin near the Turkish-Syrian border. Along the way, she will perform a number of acts, all of which are designed to bring attention to the stories of real-life refugee children.

In Paris, Amal will explore the refugee camps. Once she arrives in London, Amal will celebrate her 10th birthday. She will venture throughout different cities in London until she eventually finds her mother in Manchester and concludes her journey.

One of the project's main goals is "to celebrate the potential of refugees, children [and] grownups," and to uplift their stories and voices.

The Syrian civil war began in March 2011, forcing millions of Syrians to choose between living through war and embarking on a dangerous journey to a new country. At least half of the children were displaced during the war. 5.6 million Syrians were refugees, and 6.2 million were displaced throughout Syria, Global Citizen reported. As time passed, however, people worldwide started to become indifferent. Humanitarian efforts were still in effect, but people became apathetic about the crisis.

Good Chance co-founders Joe Murphy and Joe Robertson came up with the idea for "The Walk" when they visited a refugee camp called Calais in 2015. From there, Murphy and Robertson wanted to share stories of the refugees, thus creating the critically acclaimed play The Jungle.

Amal’s journey will begin on July 27 and finish on November 3 of this year. According to the Evening Standard, people can follow the progress of the project online and on social media.